MOSCOW -Moscow will reintroduce COVID-19 lockdown measures from Oct. 28, Mayor Sergei Sobyanin said on Thursday, with supermarkets and pharmacies the only shops allowed to stay open in an effort to cut soaring infections and deaths.

The decision came a day after President Vladimir Putin approved a nationwide week-long workplace shutdown from Oct. 30 to Nov. 7 and said regional leaders could introduce tighter measures at their discretion.

The partial lockdown in the capital, the first since June of last year, will also run until Nov. 7.

Sobyanin said all shops would close except those selling essential goods, such as supermarkets and pharmacies. Schools and kindergartens will shut too, while bars and restaurants can only operate takeaway and delivery services.

The measures reflect a growing sense of urgency over the relentless rise in cases, which the Kremlin has blamed on low vaccination rates.

Similar restrictions will apply in the wider Moscow region, but Valentina Matvienko, the head of the upper house of parliament and a close Putin ally, said another nationwide lockdown would be inadvisable.

“It would be a huge blow to the economy, a psychological blow for citizens. It is not necessary,” TASS news agency quoted her as saying.

Russia on Thursday reported 1,036 coronavirus-related deaths in the last 24 hours as well as 36,339 new infections, both record daily highs.

Authorities said they were keeping an eye on a new strain of the Delta variant of the virus which is also spreading in England, but believed existing vaccines could cope with it. [L1N2RH0KR]

Russia was quick to develop and launch its Sputnik V vaccine when the coronavirus pandemic struck last year, but take-up has been slow, with many Russians citing distrust of the authorities and fear of new medical products.

Putin himself has received the vaccine and repeatedly appealed to people to do the same, but to little avail.

The vaccine has been cleared for use in more than 70 countries but approval by the European Union’s drug regulator is unlikely until at least the first quarter of 2022 because some data needed for the review is still missing, a source with knowledge of the matter told Reuters.

But encouraging domestic take-up is the most pressing challenge now, with only around 48 million of Russia’s 144 million people fully vaccinated as of Oct. 15, according to data from the coronavirus task force.

Theatres and museums are excluded from the new lockdown and will be permitted to stay open provided they limit the number of visitors, who will be required to wear masks and present QR codes on their mobile phones to prove they have been vaccinated or have recovered from COVID.

The Bolshoi Theatre said it would soon only admit guests with QR codes, Interfax reported. Fashion house Prada said it had postponed a cultural event in Moscow, originally scheduled for Nov. 12-13 with an installation by British artist Damien Hirst, due to the lockdown announcement. 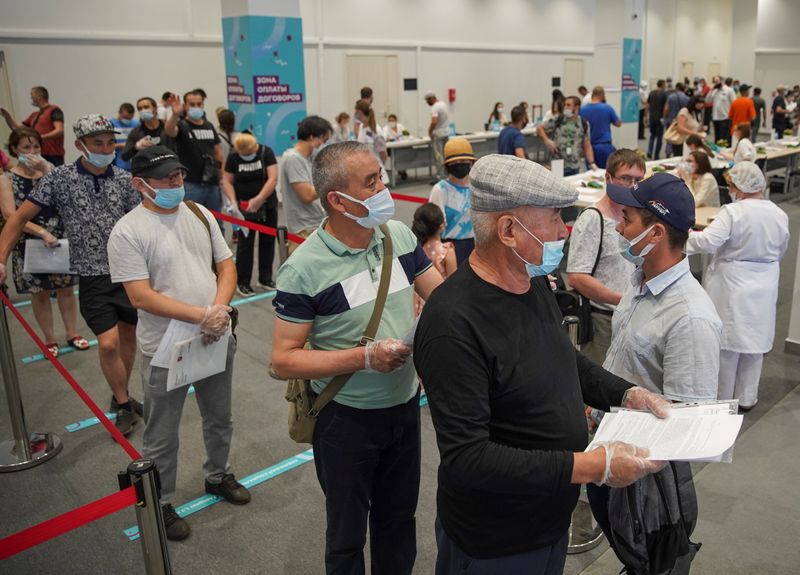