BERLIN – A booster dose of the COVID-19 vaccine developed by Pfizer Inc and German partner BioNTech SE was 95.6% effective against the coronavirus when compared to a vaccinated group that did not get the third shot, data from a large study released by the companies showed on Thursday.

The companies in a release said the booster was tested on 10,000 participants aged 16 and older who had received two doses in its earlier trials. A booster administered about 11 months after the second shot had a favourable safety profile and worked against the highly contagious Delta variant of the coronavirus, they said. The data has not been submitted for peer review.

The trial results come a day after the U.S. Food and Drug Administration authorized booster doses U.S. FDA clears Moderna, J&J COVID-19 boosters, backs use of different vaccine for boost of the COVID-19 vaccines from Moderna Inc and Johnson & Johnson, and said Americans could choose a different shot from their original inoculation as a booster.

An panel of expert advisers to the U.S. Centers for Disease Control and Prevention made a similar recommendation on Thursday, clearing the way for a final approval from its director that would allow such shots in the coming days.

The U.S. agencies previously authorized boosters of the Pfizer/BioNTech shot at least six months after the first round of shots to increase protection for people aged 65 and older, those at risk of severe disease and those who are exposed to the virus through their work.

Dr. Walid Gellad, a professor at University of Pittsburgh’s medical school, said there seems to be a benefit of having the third dose to prevent symptomatic COVID-19, but questioned if the booster was helping younger people as well as older people.

“I’m just still very curious if this is primarily in people who are much, much older. Because what we don’t want to do is run out and give boosters to 25-year-olds who had COVID before and got two doses of the vaccine, just based on this press release,” Gellad said.

Pfizer had said its two-shot vaccine’s efficacy wanes over time, citing a study that showed 84% effectiveness from a peak of 96% four months after a second dose. Some countries have already gone ahead with plans to give booster doses.

The drugmakers said on Thursday the median time between the second dose and the booster shot or the placebo in the study was around 11 months. There were only five cases of COVID-19 in the booster group, compared with 109 cases in the group that received the placebo shot.

There were no reported cases of severe disease, suggesting robust protection from infection with only the primary vaccination series, Yee wrote in a note.

The companies said they would submit detailed results of the trial for peer-reviewed publication to the FDA, the European Medicines Agency and other regulatory agencies, as soon as possible. 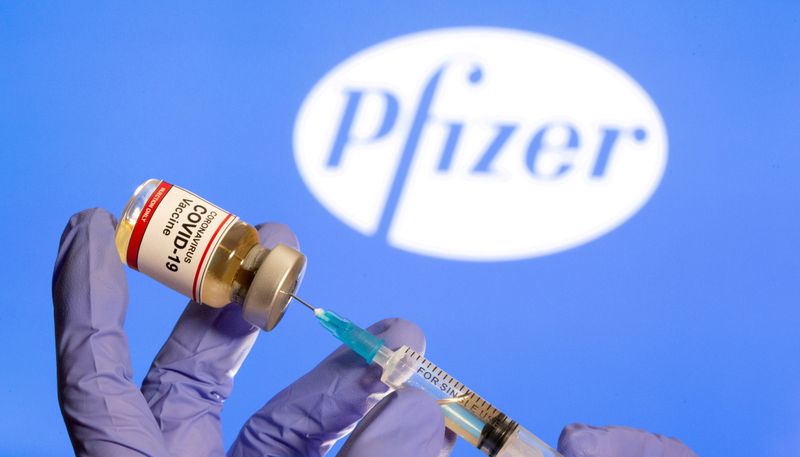