– Texas on Thursday asked the U.S. Supreme Court to keep in place a law that imposes a near-total ban on abortion and urged the justices that if they quickly take up a legal challenge brought by President Joe Biden’s administration they should overturn the landmark ruling that legalized the procedure nationwide.

Texas Attorney General Ken Paxton in a legal filing responded to the U.S. Justice Department’s request that the Supreme Court quickly block the Republican-backed state law while litigation over its legality goes forward.

The Justice Department on Monday suggested that the justices could bypass the lower courts already considering the matter and hear arguments in the case themselves. Paxton’s filing said that if the justices do that, they should overturn Supreme Court precedents including Roe v. Wade, the 1973 decision that recognized a woman’s right under the U.S. Constitution to terminate a pregnancy.

“Properly understood, the Constitution does not protect a right to elective abortion,” Paxton’s filing said, adding that the state law furthers “Texas’s interest in protecting unborn life, which exists from the outset of pregnancy.”

The Texas measure, one of a series of restrictive Republican-backed abortion laws passed at the state level in recent years, bans the procedure after about six weeks of pregnancy, a point when many women do not yet realize they are pregnant. It makes an exception for a documented medical emergency but not for cases of rape or incest.

The Supreme Court already is set to consider a major abortion case on Dec. 1 in a dispute centering on Mississippi’s law banning abortions starting at 15 weeks of pregnancy. In that case, Mississippi has asked the justices to overturn Roe v. Wade. A ruling is due by the end of June 2022.

The Supreme Court, which has a 6-3 conservative majority, previously allowed the Texas law to be enforced in a separate challenge brought by abortion providers. In that 5-4 decision on Sept. 1, conservative Chief Justice John Roberts expressed skepticism about how the law is enforced and joined the three liberal justices in dissent.

Paxton on Thursday also asked the Supreme Court to reject a bid by the abortion providers to have the justices immediately hear their case.

The Justice Department filed its lawsuit challenging the Texas statute in September, arguing that it is unconstitutional and explicitly designed to evade judicial review.

The law is unusual in that it gives private citizens the power to enforce it by enabling them to sue anyone who performs or assists a woman in getting an abortion after cardiac activity is detected in the embryo. That feature has helped shield the law from being immediately blocked as it made it more difficult to directly sue the state.

Individual citizens can be awarded a minimum of $10,000 for bringing successful lawsuits. Critics have said this provision lets people act as anti-abortion bounty hunters, a characterization its proponents reject.

In his Oct. 6 ruling, U.S. District Judge Robert Pitman in Austin, Texas, found that the law was likely unconstitutional and designed to avoid judicial scrutiny. The judge said he would “not sanction one more day of this offensive deprivation of such an important right.” 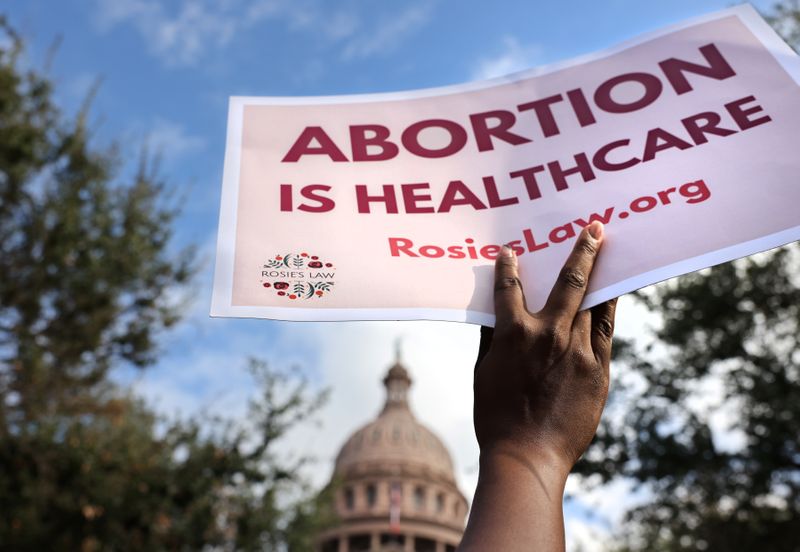