The 24-year-old Red Bull racer also gave the seven-times world champion, the most successful driver of all time, a single digit salute as the Mercedes accelerated away on a hot and humid Texas afternoon at Austin’s Circuit of the Americas.

“Ignore it, don’t worry about it,” his race engineer told him over the radio. Red Bull team boss Christian Horner joked Verstappen was simply pointing out who was number one in the standings.

Verstappen is six points clear of Hamilton with six rounds remaining and the battle is getting more intense with every race as the pendulum swings one way and then the other.

The Dutch youngster’s Mexican team mate Sergio Perez was quickest in the second session, with a best lap of one minute 34.946 seconds.

“It was a good day, obviously it’s going to be very tight,” said Perez, whose role will be to support Verstappen unless circumstances fall his way.

“There’s a lot to be done to try to improve the car,” he added.

Verstappen, meanwhile, was frustrated by traffic and failed to set a proper flying lap. He ended up eighth in the session after third in the morning.

“The track’s quite bumpy and to find the right compromise with the car hasn’t been the easiest so far,” said Verstappen.

Jenson Button, Britain’s 2009 world champion who is now a television pundit for Sky, wondered whether Hamilton was playing mind games.

“Obviously it did rattle Max a little bit, he was very upset on the radio,” he said.

“It’s been quite a fiery day for Max, to be fair. Not getting his lap. I think there’s a bit of frustration building, with that incident he couldn’t get his lap and then he had traffic in FP2 on his new tyres for two laps in a row.”

McLaren’s Lando Norris was second fastest and Hamilton, who had his best lap deleted for exceeding track limits, third.

“Generally it’s been a good day but still work to do,” said the champion, who will be chasing a record-extending 101st career win on Sunday and sixth in nine races in Austin.

Mercedes had dominated the first session with Hamilton’s Finnish team mate Valtteri Bottas 0.045 quicker than the champion with Verstappen third but nearly a second off the Finn’s pace.

Bottas, fourth in the afternoon session, will have a five-place grid penalty for Sunday’s race after using his sixth engine of the campaign — three more than the rules allow.

Mercedes are favourites to win on Sunday after taking pole for the last six races there. Last year’s round was cancelled due to the COVID-19 pandemic.

Ferrari’s Charles Leclerc and Carlos Sainz were fourth and fifth in the morning, a boost for a team fighting McLaren for third.

The opening session was stopped after three minutes when Fernando Alonso stopped on track. The team said the Spaniard, who returned later, had done so as a precaution.

Haas’s Mick Schumacher and Perez clashed on the bumpy track late in that session, with the Mexican unimpressed by the German rookie but later clearing things up. Stewards decided to take no further action.

(Reporting by Alan Baldwin in London, editing by Ken Ferris and Pritha Sarkar) 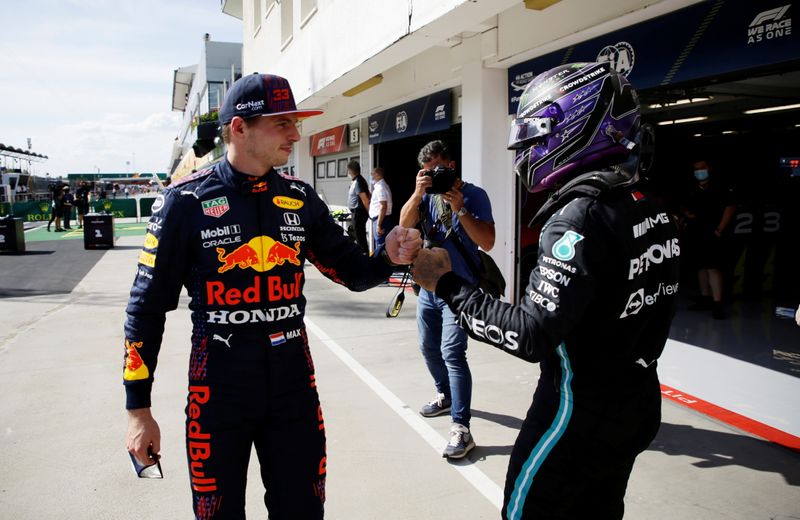