WASHINGTON -White House officials are gearing up for a virtual meeting between President Joe Biden and Chinese leader Xi Jinping they hope will show the world Washington can responsibly manage relations between the rival superpowers, people familiar with the matter say.

Combative diplomatic exchanges with China early in the Biden administration unnerved allies and U.S. officials believe direct engagement with Xi, who has consolidated power in Beijing to a degree not seen since Mao Zedong, is the best way to prevent the relationship between the world’s two biggest economies spiraling toward conflict.

Given China’s domestic COVID restrictions and Xi’s reluctance to travel, two sources familiar with the matter said Washington is aiming for a video conference call between Biden and Xi in November, though plans are still under discussion.

An agenda will likely not be set until after consultations with allies, they said, including during next week’s summit of the Group of 20 countries in Rome and a subsequent U.N. climate conference in Glasgow.

Biden will attend both forums. Xi, who hasn’t left China since early in the pandemic, is not expected to travel.

While the stakes for the Biden-Xi meeting are high – Washington and Beijing have been sparring on issues from the origins of the pandemic to China’s expanding nuclear arsenal – Biden’s team is so far setting low expectations for specific outcomes and has declined to say what the agenda might include.

“We are still planning details of the virtual bilateral meeting and there is nothing to preview at this time,” a senior administration official said.

The sources familiar with current plans, who spoke on condition of anonymity, said the meeting would be a major outcome in itself, with the hope it could bring stability to what Washington says will be long-term strategic competition.

The two sides agreed in talks in Switzerland this month to hold the virtual conference by the year-end, with direct leader-level communication intended to set relations in a more “constructive direction,” a senior U.S. administration official said at the time.

“We think it’s particularly important for the leaders to take more of a role in managing this relationship,” the official said.

Susan Thornton, a former senior State Department official for Asia now at the Brookings Institution, said the meeting could help repair a communication void and put a floor under relations that were still in a “downward spiral.”

“That’s not really an outcome, but it prevents things from getting worse,” she said.

Throughout a trade war during former President Donald Trump’s administration, Chinese officials sought an upper hand by suggesting U.S. officials were the ones seeking talks. Now, Biden officials trying to show the United States is the responsible power have flipped the script, telling journalists after a Sept. 9 phone call between Biden and Xi that Biden had initiated the interaction.

Departing from Trump’s go-it-alone approach to China policy, Biden has staked his strategy on mobilizing allies and partners in Europe and Asia to increase leverage over Beijing.

David O’Sullivan, the former EU ambassador to Washington, told Reuters European allies had been “very anxious” that improperly managed U.S.-China relations, as appeared evident in tense public exchanges at high-level diplomatic meetings in Alaska in March, could drag them into a conflict.

“Those are the kind of messages that people are sending to this administration. I think they understand that, and I think this probably is one of the reasons why they are reaching out (to China),” he said.

Days after the Alaska meetings, U.S. Secretary of State Antony Blinken found it necessary to stress in Brussels that the United States would not force any NATO ally to choose sides between Washington and Beijing.

An Asian diplomat said “everyone around the world was a little bit anxious” about where the U.S.-China relationship was headed after Alaska.

Toning down the rhetoric also made sense for Xi, who over the next year wants smooth sailing for hugely important national events, including the Beijing Winter Olympics in February, and a Communist Party Congress where he is set to secure an unprecedented third term as party boss.

“Not disrupting either of these means that you have to have some managed relationship between the U.S. and China,” the diplomat told Reuters. “You minimize the risk of conflict in what is actually a very important 12 months for Xi Jinping domestically.”

Hanging over the Beijing Games is Washington’s charge that China is committing “genocide” against Muslims in its Xinjiang region, although Biden officials have so far demurred in the face of calls by rights groups and U.S. legislators for a diplomatic boycott of the event.

Still, with disagreements abounding, U.S. officials insist it is a mistake to see a “thaw” in relations.

The administration has recently expressed concern about evidence of a nuclear build-up by China and its work on hypersonic missiles, and has also accused China of ramping up military activity in an effort to intimidate democratic Taiwan.

On Wednesday, Biden’s nominee to be ambassador to China, Nicholas Burns, called China Washington’s “most dangerous competitor” and said the United States needed to work closely with allies.

“We have partners who believe in us and the Chinese really do not,” he said. “I think President Biden has tried to emphasize the need for us to be very closely aligned … (with) our treaty allies, our defense partners.” 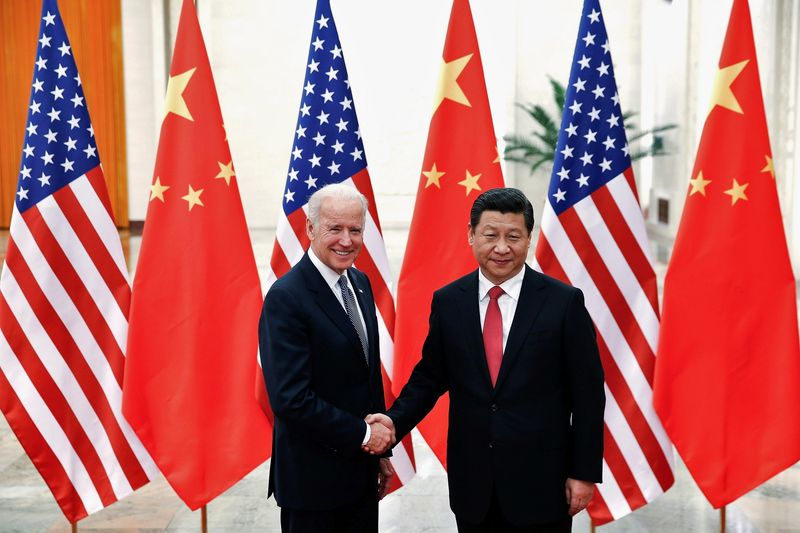