RICHMOND, Va. -Former U.S. President Barack Obama urged Virginians to re-elect Terry McAuliffe as governor at a rally on Saturday, emphasizing the race’s significance as an indicator of the country’s political direction and a reflection of its values.

Obama and McAuliffe, who served as the state’s governor from 2014 to 2018, spoke before a cheering crowd at Virginia Commonwealth University in Richmond with just 10 days to go before the closely watched, tight Nov. 2 election.

The off-year race is seen as a barometer of how the country might decide the 2022 midterm elections, which will decide which party controls Congress, and a referendum on Democrat Joe Biden’s presidency.

Obama told the crowd the Virginia election represented a national “turning point,” where Americans could either become more embattled in the divisive politics that characterized Republican Donald Trump’s presidency and which culminated in an attack by Trump’s supporters on the U.S. Capitol on Jan. 6, or “pull together” to “solve big problems.”

“I believe you, right here in Virginia, are going to show the rest of the country and the world that we’re not going to indulge in our worst instincts,” Obama said. “We’re not going to go back to the chaos that did so much damage. We’re going to move forward with people like Terry leading the way.”

McAuliffe told the crowd the election was too important to sit out, with several key issues on the ballot.

“This election is about the next chapter of Virginia and our country. … It’s about leading us out of this pandemic, keeping our economy strong, protecting voter rights, protecting abortion rights and so much more,” he said.

Youngkin’s strength in the polls during the first weeks of early voting has worried Democrats, who anticipated a comfortable lead in a state that has trended blue in recent years. Democrats flipped the Virginia legislature in 2019 and Trump lost the state by 10 percentage points in November 2020, double his margin of defeat in 2016.

Melody Pearce, 50, a clinical nurse investigator who attended Saturday’s rally for McAuliffe, said the polls made her nervous.

“After the election of President Biden I thought we would be able to exhale for a minute,” she said. “I’m afraid people will not come out to vote and lose enthusiasm.”

Democratic National Committee Chairman Jaime Harrison told reporters at Saturday’s event he was confident that Virginians would go to the polls and deliver a victory for McAuliffe.

“At the end of the day, it’s about turnout,” he said. “If we get the Democrats to turn out, we win.”

The serving governor, Ralph Northam, a Democrat, cannot seek re-election because the state bars governors from serving consecutive terms. McAuliffe can run because he left office in 2018.

Both candidates for governor have dug into hotly contested cultural issues to stir up voter engagement, including abortion rights and how schools address the topics of race and racism with students.

McAuliffe has sought to paint Youngkin as a far-right extremist and align him with Trump, who has endorsed the Republican candidate.

In turn, Youngkin has suggested that McAuliffe is trying to advance a far-left agenda. A former private equity executive, Youngkin has focused in part on education – especially the right of parents to have a say in their children’s schooling – which has proven popular with suburban women, a key demographic.

Youngkin has walked a fine line between welcoming Trump’s endorsement and distancing himself from the former president’s false claim that the 2020 presidential election was stolen.

Obama condemned Youngkin on Saturday for walking that line, and said it reflected poorly on his character.

“Either he actually believes in the same conspiracy theories that resulted in a mob, or he doesn’t believe it but he’s willing to go along with it to say or do anything to get elected. And maybe that’s worse,” Obama said.

Last week, Youngkin dissociated himself from a rally held to support him, which was headlined by longtime Trump aide Steve Bannon and Trump himself, who spoke by phone. At the event, attendees pledged allegiance to a flag that event leaders said was present on Jan. 6 when Trump supporters led an assault on the U.S. Capitol.

Youngkin issued a statement saying it was “weird and wrong” to pledge allegiance to a flag with Jan. 6 connections. 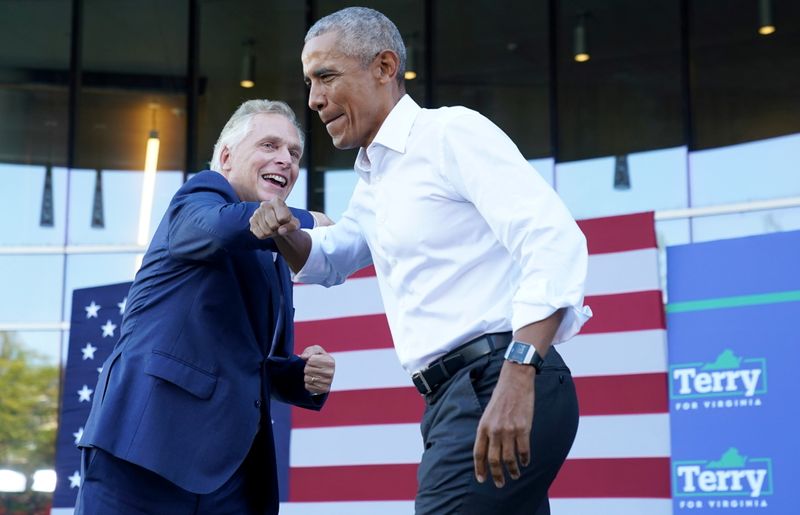 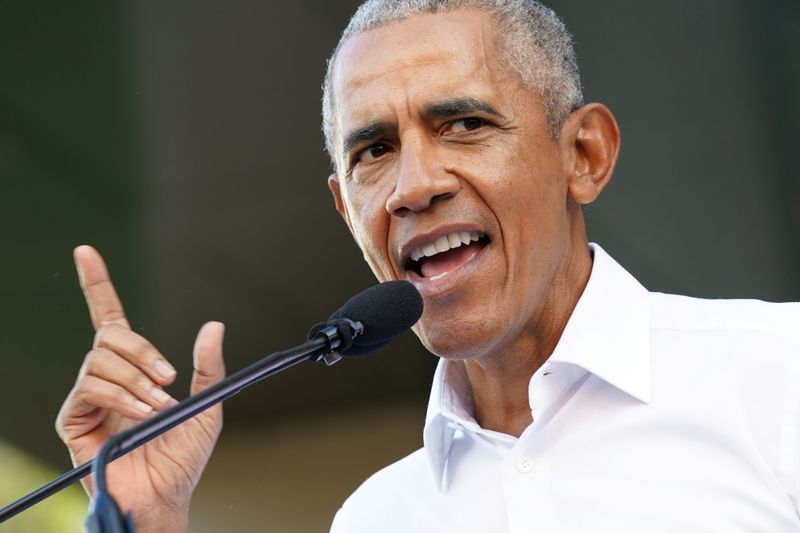 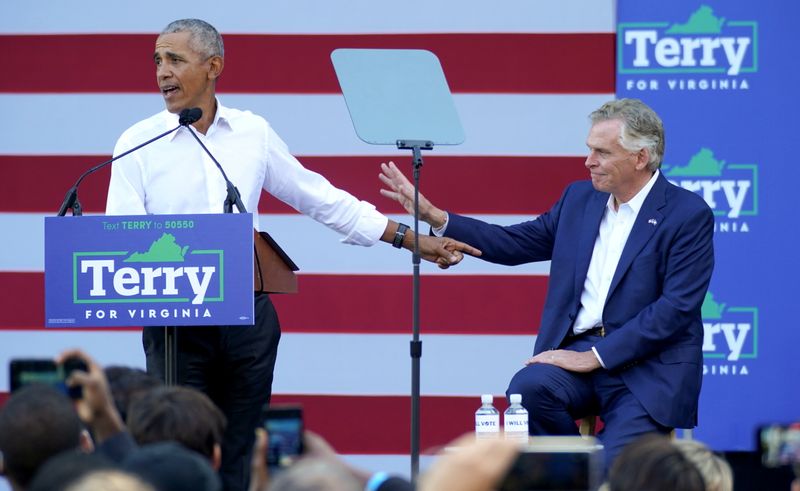 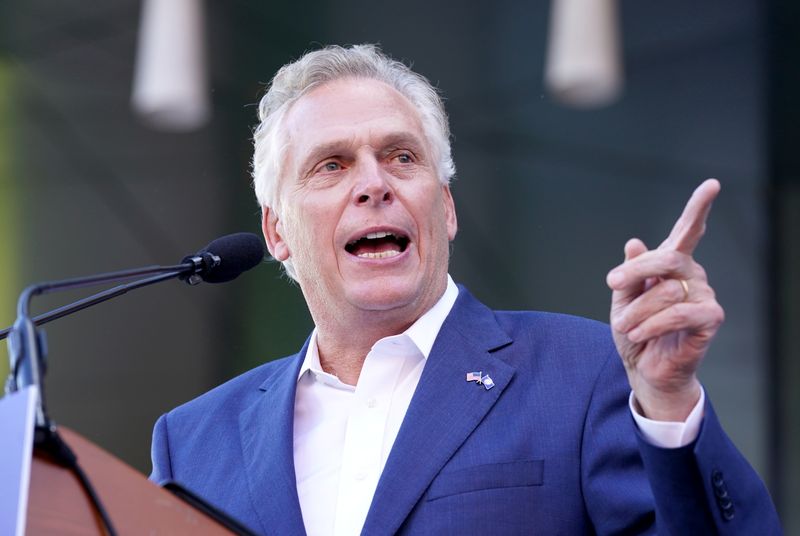 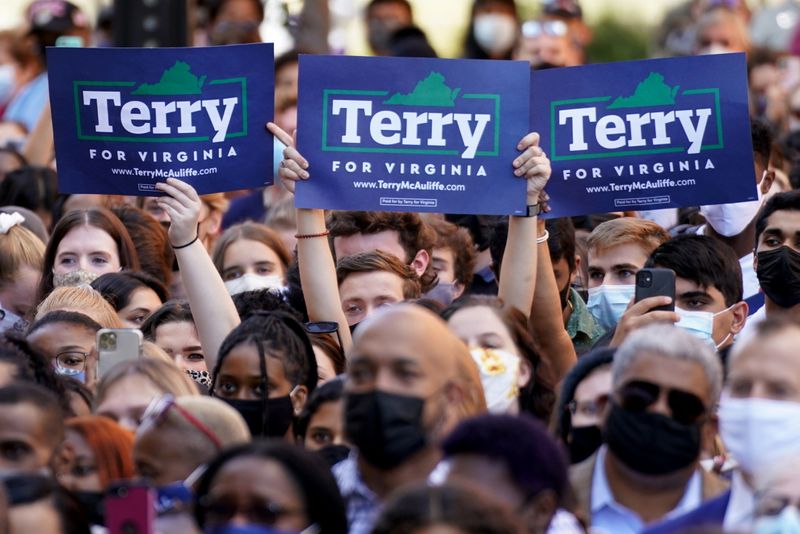