SYDNEY – Australian officials plan to roll out COVID-19 booster shots soon to prevent a resurgence of cases, as residents in the two largest cities of Sydney and Melbourne begin to enjoy more freedoms after months-long curbs.

Australia has ditched its COVID-zero strategy in favour of suppressing the coronavirus, after largely stamping out infections for most of this year, and is now aiming to live with the virus through higher vaccinations.

Officials are gradually shifting their focus to booster shots as double-dose vaccinations levels in Australia’s adult population nears 75%. Almost 87% of people above 16 have received their first dose since the national rollout began in February.

“We think what is going to happen is that a booster shot will be made available from six months from your second dose,” Lieutenant General John Frewen, head of the vaccination taskforce, told the Australian Broadcasting Corp on Monday.

Advice from the country’s immunisation advisory group on booster shots “is imminent”, he said, adding health workers, and staff and residents in aged care and disability centres would be offered the doses in the initial phase.

Amid a surge in vaccinations, Victoria on Monday logged its lowest rise in daily infections in nearly three weeks at 1,461, while cases dipped for the fourth straight day in neighbouring New South Wales (NSW) to 294.

Officials in Victoria are looking to ease more restrictions on gatherings and movement on Friday, just a week after Melbourne, the state capital, exited its sixth lockdown during the pandemic. Sydney lifted its lockdown two weeks ago.

Double-dose vaccination rates in Victoria’s adult population will top 80% by then – a level where masks will not be mandatory outdoors and people free to travel throughout the state.

That rate neared 85% in NSW, home to Sydney, with the state tipped to hit 90% next week. The next set of restrictions will be eased on Dec. 1, when the lockdown rules will lift for the unvaccinated, according to the state’s reopening plan. 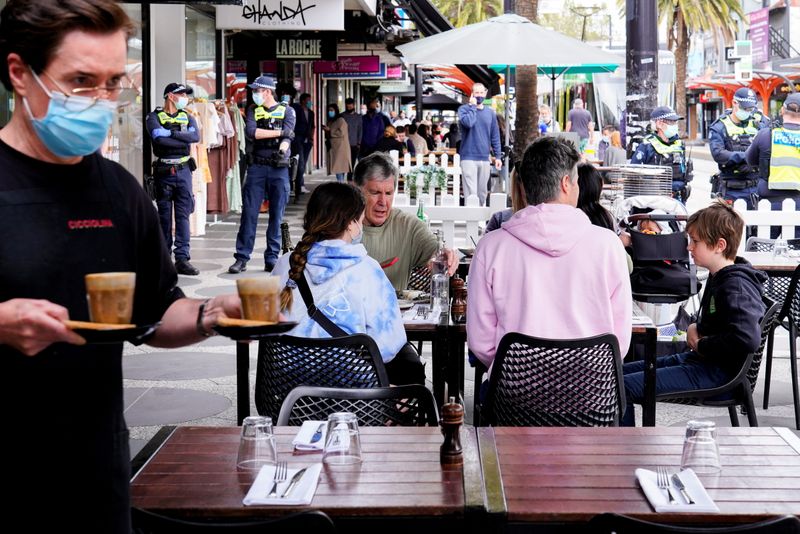