By Elaine Lies and Kiyoshi Takenaka

TOKYO – Japan’s Princess Mako, the emperor’s niece, married her college sweetheart on Tuesday, giving up her royal title and saying she was determined to build a happy life with her “irreplaceable” husband after a tumultuous engagement.

In a news conference with new husband and commoner Kei Komuro marked by unusual candour for Japan’s royal family, Mako said her marriage to Komuro had been inevitable despite the widespread opposition to it.

Mako – now known as Mako Komuro – was diagnosed with post-traumatic stress disorder (PTSD) earlier this year after an engagement plagued by a money scandal, intense media scrutiny and a three year separation from her fiance.

“Kei is irreplaceable for me. For us, marriage is a necessary choice to live while cherishing our hearts,” Mako told a news conference.

She said “incorrect” reporting on her new husband had caused her “great fear, stress and sadness”.

“The flow of arbitrary criticism of Kei’s actions, as well as one-sided speculation that ignored my feelings, made falsehoods somehow seem like reality and turn into an unprovoked story that spread,” she added.

The two, 30, were married in the morning after an official from the Imperial Household Agency (IHA), which runs the family’s lives, submitted paperwork to a local office registering their marriage.

Royal marriages usually involve a series of formal ceremonies and a celebration, but the two forewent all rituals and even turned down the $1.3 million usually given to women who leave the family.

During the news conference, Komuro pledged to protect and support Mako.

“I love Mako. I want to spend the only life I have with the one I love.”

The two announced their engagement in 2017 at a news conference, where the smiles they exchanged won the hearts of the nation. But things soon turned sour as tabloids reported on a money scandal involving Komuro’s mother, prompting the press to turn on him.

The marriage was postponed, and he left Japan for law studies in New York in 2018, keeping in touch with Mako through the Internet. They were finally reunited this month.

Television footage earlier showed Mako, wearing a pastel dress and pearls, saying goodbye to her parents and 26-year-old sister, Kako, at the entrance to their home. Though all wore masks in line with Japan’s coronavirus protocol, her mother could be seen blinking rapidly, as if to fight off tears.

Mako bowed formally to her parents, while her sister grabbed her shoulders and the two shared a long embrace.

Komuro, dressed in a crisp dark suit and tie, bowed briefly to camera crews gathered outside his home as he left in the morning, saying nothing. His casual demeanour on returning to Japan in September, including a ponytail which was cut off before the marriage, had sent tabloids into a frenzy.

The two will live in New York after Mako applies for her first ever passport.

In a statement, Mako’s parents acknowledged the opposition the marriage had faced.

“But their feelings never wavered even once,” they said.

Just months after the two announced their engagement, tabloids reported a financial dispute between Komuro’s mother and her former fiance, with the man claiming mother and son had not repaid a debt of about $35,000.

The scandal spread to mainstream media after the IHA failed to provide a clear explanation. Komuro said during the news conference he had offered a settlement and was working towards a solution, after issuing a 24-page statement on the matter earlier this year.

About a hundred people gathered in a Tokyo park to protest the marriage. Public opinion polls show the Japanese people are divided.

“There are various alleged problems involving Kei Komuro and his mother,” said 44-year-old protester Kei Kubota. “However, they forced through this marriage without giving us any explanation.”

Analysts say the problem is that the imperial family is so idealised that people think not the slightest hint of trouble involving money or politics should touch them.

In a statement issued after the news conference, Mako said she was distressed by one of the questions which had associated their marriage with the word “scandal”.

“What I would like is to just lead a peaceful life in my new environment,” she said. 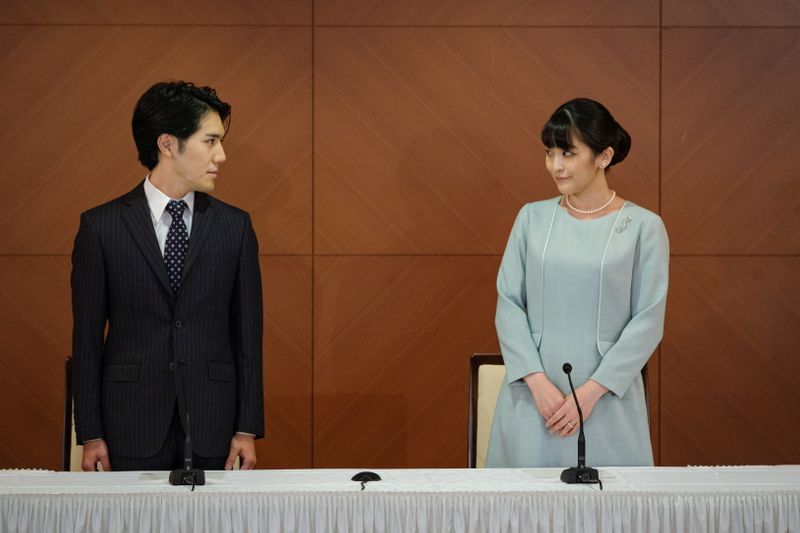 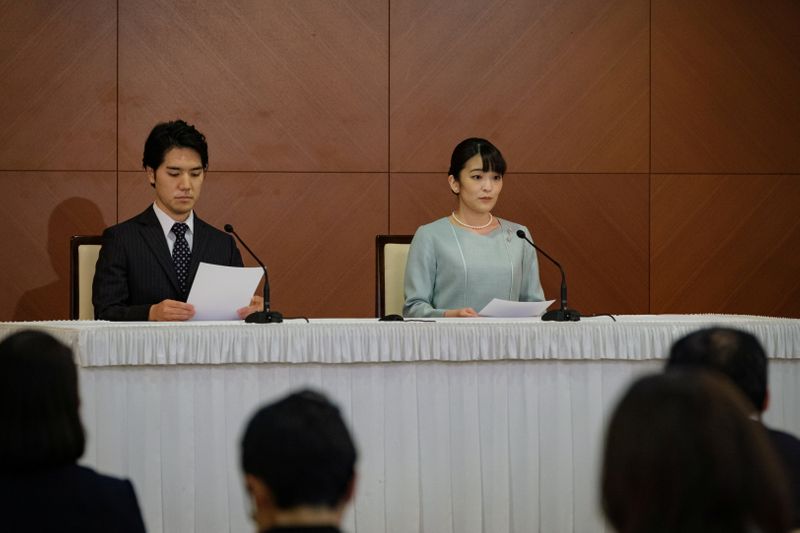 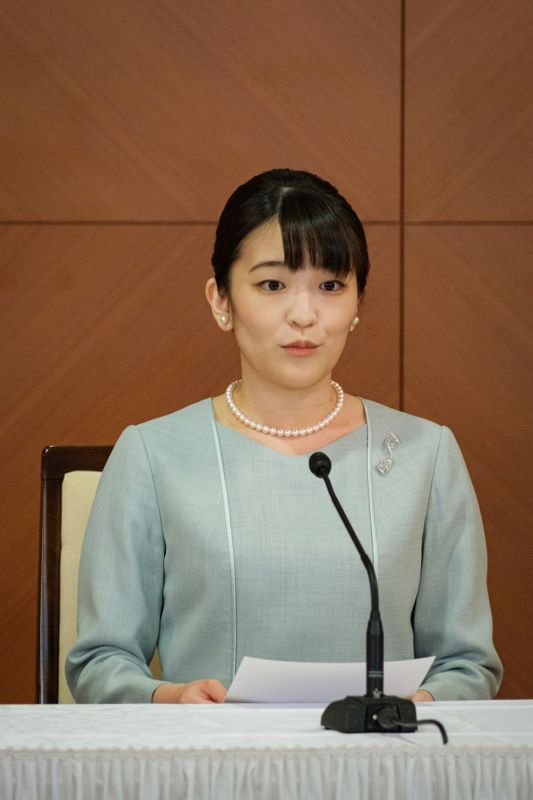 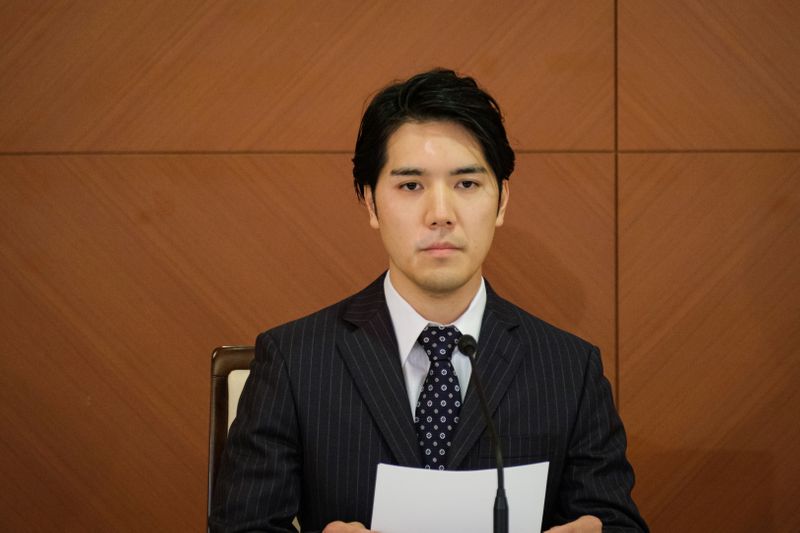 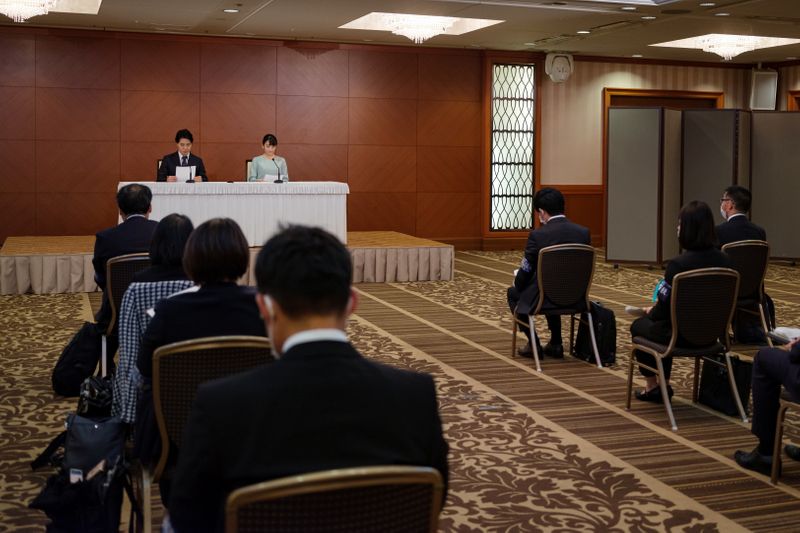