The survey from the Conference Board on Tuesday showed consumers eager to buy a home and big-ticket items such as motor vehicles and major household appliances over the next six months. The share of Americans planning to go on vacation was the largest since February 2020, just before the nation was slammed by the first wave of COVID-19 infections.

A resurgence in coronavirus cases over the summer, driven by the Delta variant, and supply-chain constraints related to the pandemic restrained economic activity last quarter.

“Consumers are more upbeat after a rocky third quarter and this argues for a strong finish for the economy in 2021,” said Christopher Rupkey, chief economist at FWDBONDS in New York. “Consumers know the tight labor market has their backs. Those forecasting a recession from the drop in the confidence late in the summer will have to back off that call.”

The consumer confidence index increased to a reading of 113.8 this month from 109.8 in September, ending three straight monthly declines. The measure, which places more emphasis on the labor market, remains below its peak of 128.9 in June. The rise contrasted with the University of Michigan’s survey of consumers, which showed sentiment falling early this month.

The rebound in confidence coincided with an ebb in coronavirus infections. Consumers were upbeat about both current conditions and the short-term outlook. Economists polled by Reuters had forecast that the index would dip to 108.3.

The Conference Board’s so-called labor market differential, derived from data on respondents’ views on whether jobs are plentiful or hard to get, raced to a reading of 45 this month, the highest in 21 years, from 43.5 in September.

This measure closely correlates to the unemployment rate in the Labor Department’s closely watched employment report.

Combined with declining new claims for unemployment benefits, it raises hopes that job gains picked up this month after employers hired the fewest workers in nine months in September. Slower job growth has been blamed on pandemic-related labor shortages. There were 10.4 million job openings at the end of August.

“This is another sign that job growth reaccelerated in October,” said Ryan Sweet, a senior economist at Moody’s Analytics in West Chester, Pennsylvania. “It points toward a decline in the unemployment rate in October.”

Stocks on Wall Street were trading mostly higher. The dollar rose against a basket of currencies. U.S. Treasury prices were mixed.

Consumers’ inflation expectations over the next 12 months jumped to 7.0%, the highest in 13 years, from 6.5% last month.

Despite perceptions of high inflation, consumers planned to step up spending. Buying intentions for motor vehicles rebounded from a nine-month low. More consumers intended to purchase household appliances like washing machines, television sets and refrigerators over the next six months.

Some economists speculated that higher prices were forcing consumers to bring forward purchases to avoid paying even more for goods. The rebound suggested consumer spending would regain steam after an apparent sharp deceleration last quarter.

Economists believe the government’s snapshot of third-quarter gross domestic product growth on Thursday will likely show that consumer spending stalled last quarter after growing at a robust 12% annualized rate in the April-June period.

With spending weak, third-quarter GDP growth estimates are mostly below a 3% rate. The economy grew at a 6.7% pace in the second quarter. The anticipated slowdown would reflect widespread shortages, including for goods such as motor vehicles and some household appliances, as well as the Delta variant’s hit to spending on services like air travel and hotel accommodation.

“Slower growth doesn’t imply a weak economy,” said Joel Naroff, chief economist at Naroff Economics in Holland, Pennsylvania. “There is nothing soft about it, at least when it comes to demand.”

Consumer spending this quarter is also likely to be boosted by increased demand for travel. The percentage of consumers saying they plan to take a vacation in the next six months increased to 47.6%. That was the highest figure since the pandemic started and was up from 42.3% in September.

They mostly planned trips in the United States and intended to either drive or fly to their destinations.

There was good news on the housing market. In a separate report on Tuesday, the Commerce Department said sales of new single-family homes surged 14.0% to a seasonally adjusted annual rate of 800,000 units in September.

The Conference Board survey showed consumers more inclined to buying a home over the next six months. The housing market could get a lift from a moderation in house price inflation.

A third report on Tuesday showed the S&P CoreLogic Case-Shiller’s 20 metropolitan area home price index rose 19.7% on a year-on-year basis after a record 20% jump in July.

Signs that house price growth has peaked were evident in a fourth report from the Federal Housing Finance Agency that showed house prices rose 18.5% in the 12 months through August after surging by a record 19.2% in July.

“The slowing acceleration in home prices suggests that buyer fatigue is setting in, particularly among higher-priced homes where the acceleration in price growth from the previous month has been larger compared to low-tier homes,” said Selma Hepp, deputy chief economist at CoreLogic. 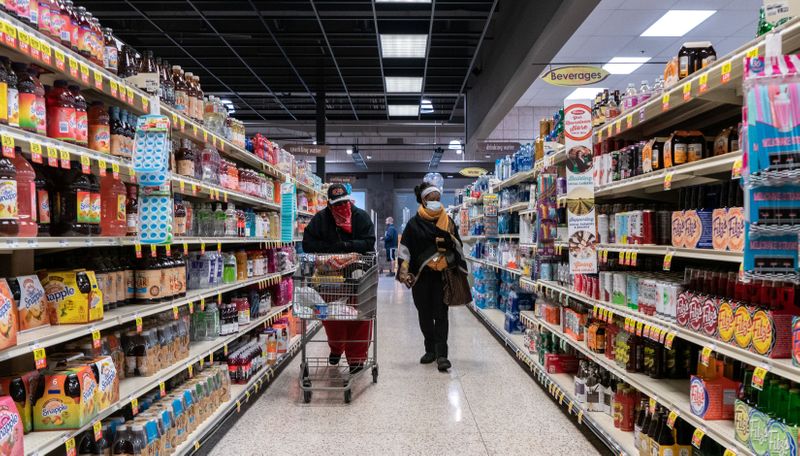