BERLIN – German sportswear company Puma on Wednesday advised people to shop early for Christmas as supply bottlenecks and manufacturing disruptions would mean a shortage of its products well into 2022.

The company expects that Vietnam factory closures, compounded by shipping constraints, will hit its product supplies, even as the group increased its 2021 sales outlook.

Puma, which reported stronger-than-expected third quarter results, also expects its sales in China to continue to be impacted by coronavirus lockdowns and a consumer boycott of Western brands triggered earlier this year by a political row.

Factories in Vietnam, a major supplier to the footwear industry, closed for 10 to 11 weeks due to COVID-19 outbreaks, but Puma Chief Executive Bjorn Gulden said they were now open again and should resume full production by the end of November.

But he said the closures in Vietnam, where Puma makes a third of its products, would still impact supplies through to the end of this year and into the first quarter of 2022, exacerbated by port congestion and a lack of shipping capacity.

“If you want to buy Christmas presents, you should buy now,” Gulden told a briefing for reporters, adding that supply chain issues, compounded by higher costs of raw materials, could feed through to higher prices in the second half of 2022.

Puma said sales in the third quarter, when the Vietnam closures had not yet hit supplies, rose a currency-adjusted 20.4% to 1.9 billion euros ($2.21 billion) and operating profit jumped to 229 million euros, both beating analyst forecasts.

Puma shares were up 1.8% at 0845 GMT, making them the biggest gainer on the German blue-chip index.

Sales fell 16% in Greater China due to ongoing lockdowns there and the impact of a consumer boycott.

Western brands, including Puma, faced online attacks in China in late March over past statements saying they would not source cotton from Xinjiang after reports of human rights abuses against Uyghur Muslims. Beijing denies any such abuses.

Gulden said Puma was still not able to do marketing with Chinese celebrities and shopper traffic in stores was down, but he is optimistic about China’s “Single’s Day” sales event in November and ultimately for a medium-term recovery there.

Puma increased its forecast for full-year currency-adjusted sales growth to at least 25% from a previous outlook of at least 20%, and Gulden said the company eventually hopes to double its annual sales to more than 10 billion euros. 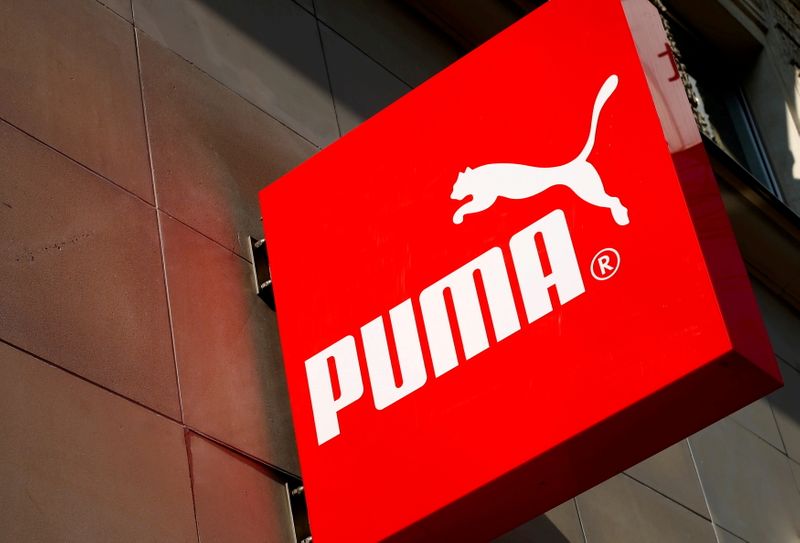