QUITO – Ecuador’s President Guillermo Lasso on Wednesday called for dialogue following a second day of demonstrations by indigenous and civil society groups against gasoline price rises, and said his government would keep security forces on highways to maintain order.

Thousands of demonstrators marched on Tuesday in rejection of Lasso’s increase of the price of gasoline extra, a cheaper gasoline that is Ecuador’s most-used fuel, to a fixed $2.55 a gallon, and diesel to $1.90 a gallon.

Lasso, a conservative ex-banker who took office in May, was under pressure from unions and others to freeze incremental gasoline price increases begun by his predecessor last year.

“I call once more for dialogue, for consensus, for thinking of the good of the country and not of personal, party or union interests,” Lasso said during a military ceremony. “In these moments of economic recovery it’s time to be united.”

Various road blockades begun ahead of Tuesday’s protests were continuing on Wednesday, including a barricade of earth and trees on one of capital Quito’s access roads.

Other roads in the country’s center and south were also closed, emergency services ECU 911 said, and transportation in the Amazon region was reportedly delayed by closures.

The Ecuador Confederation of Indigenous Nations (CONAIE) said on Twitter that protests would take place around the country and posted video of one demonstration in Tungurahua province.

Police were being deployed to clear some blockades, footage on local media showed.

“If tomorrow the challenges remain we’ll maintain the control by police in the cities, plazas and countryside of Ecuador,” Lasso said.

At least eight police officers were injured during Tuesday’s demonstrations and 37 people were arrested for blocking roads, the government said. CONAIE said demonstrators had also been hurt but did not give a figure. 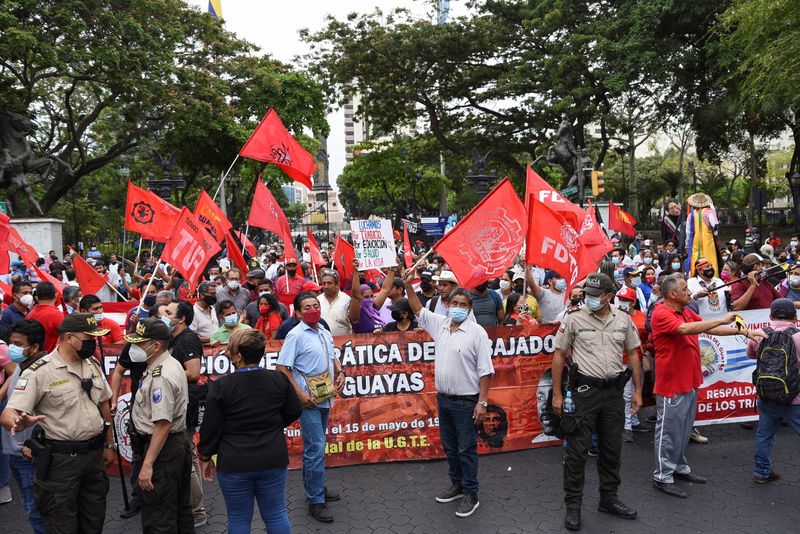