By Lucila Sigal and Daniela Desantis

CHARIGUE, Argentina (Reuters) – Gustavo Alcides Diaz, an Argentine fisherman and hunter from a river island community, is at home on the water. The Parana River once lapped the banks near his wooden stilt home that he could reach by boat. Fish gave him food and income. He purified river water to drink.

Now the 40-year-old looks out on a trickle of muddy water.

The Parana, South America’s second-largest river behind only the Amazon, has retreated this year to its lowest level since its record low in 1944, hit by cyclical droughts and dwindling rainfall upriver in Brazil. Climate change only worsens those trends.

The decline of the waterway, which knits together a huge swathe of the continent, has hurt river communities like Diaz’s, snarled grains transport in Argentina and Paraguay and contributed to a rise in wildfires, damaging wetland ecosystems.

“This is historic. I’ve never seen it so low in my lifetime,” Diaz said at his home in Charigue, some 300 kilometers (186 miles) upriver from the Argentine capital Buenos Aires, lamenting the impact on fish stocks and fresh water. “When everything dries up, the water rots.”

The Parana’s crisis is among the multitude of woes arising worldwide associated with global climate change linked to the burning of fossil fuels and the resulting greenhouse gas emissions. World leaders are set to meet at the United Nations Climate Change Conference, or COP26, starting on Oct. 31 in Glasgow, Scotland amid warnings from a U.N. panel about climate-related disruptions for decades, if not centuries, to come.

The river, born in southern Brazil, snakes about 4,880 kilometers (3,030 miles) through Paraguay and Argentina before reaching the Atlantic Ocean. It is a vital waterway for commercial shipping and fishing, provides drinking water to millions of people, powers hydroelectric plants and supports rich biodiversity.

Billions of dollars worth of agricultural commodities such as soy, corn and wheat are transported to ports down the Parana to be shipped around the world. It carries about 80% of Argentina’s farm exports, though some shippers are now looking to move goods over land due to the reduced water levels.

The Parana’s flow at some points this year has fallen to just over half the normal amount. Satellite imagery clearly shows how much the river has receded.

The dry weather driving the Parana’s decline is due in part to a long-term natural cycle of weather patterns that is being worsened by global warming, wetlands burning and hydroelectric dam construction – all coinciding with the La Nina natural ocean-atmospheric phenomenon that lowers rainfall levels, agronomist and climate expert Eduardo Sierra said.

The broader dry cycle could last for decades, forcing a readjustment for communities, farmers and shippers, Sierra added.

“This is a twice-in-a century event,” said Sierra, an adviser to the Buenos Aires grains exchange, referring to the river’s decline.

“We also have a human cause which is global warming, which is accentuating all the variations in the climate,” Sierra added, noting that human activity including damming also “impacts the river’s ability to self-regulate.”

The Parana – meaning “like the sea” in the Tupi-Guarani language spoken by local indigenous peoples, owing to its vastness – is formed by the convergence of two rivers in Brazil, the Rio Grande and the Paranaiba. The Parana fills with water in Brazilian states including Goias, Minas Gerais, Sao Paulo and Mato Grosso do Sul before its long journey to the River Plate estuary at Buenos Aires.

These areas upriver have experienced steady declines in rainfall levels over the past 10 years, according to a Reuters analysis of Refinitiv weather data spanning the past three decades.

The analysis showed that combined average rainfall in those four Brazilian states has plunged to the lowest level since at least the early 1990s. Precipitation levels during that time have dropped by half, with the trend accelerating in the past decade.

“This past year will stand out compared to anything else from the past any way you measure it,” said Isaac Hankes, Refinitiv senior weather research analyst.

That sustained drop in rainfall directly impacts the level of the Parana thousands of kilometers (miles) down river in Argentina and Paraguay, where huge ships and barges rely on deep river channels to ferry large agricultural cargoes.

The river’s declining levels are hindering the transport of such cargo because ships are unable to be fully loaded due to concern that a deeper draft – the distance from the waterline to the vessel’s bottom – from the extra weight might cause them to run aground.

The river’s average depth over the past two years at the Argentine inland grains port of Rosario is the second lowest on record, behind a historic drought in 1944. Measuring sticks that dot the river at key points and provide depth gauges related to a set historical “zero” level – instead of the river bed – have dropped into negative territory.

Guillermo Wade, manager of Argentina’s Chamber of Port and Maritime Activities, said the lower level means that ships are cutting grain cargoes by around 20% versus normal volumes. Ships must cut from 1,600 to 2,175 tonnes of cargo to save a foot of draft, Wade added. Vessels are leaving Rosario with an average draft of about 9.1 meters (30 feet) versus the normal 10.4 meters (34 feet), Wade said.

“In more than 40 years that I have been in this job, I have never seen it reach 33 centimeters (13 inches) below zero. I had never seen that,” Wade said.

Low river levels also have forced exporters to take smaller loads in cargo ships while upriver and then add cargo at deep water ports down the river, raising logistics costs. Argentina has lost about $620 million in soybean meal and soyoil exports alone due to transport problems caused by lower river levels, according to the Rosario grains exchange.

“Through this decline we are losing cargo loads,” Wade said. “Perhaps next time instead of coming for this little bit here, boats will go directly to Brazil and we will lose out.”

In wetland areas around the river delta in Argentina, lower water levels have contributed to a spike in wildfires, with people in river island communities losing homes and livestock.

“When the river rises just 10 centimeters (4 inches) here they celebrate,” said Javier Herenu, 53, a local teacher near Charigue whose boat commute from his home to the school has been replaced by a long walk in a dry riverbed.

“The economic impact is gigantic,” Carlos Balletbo, a senior official at regional shipper Atria, said at his office near the tri-border area where Argentina, Brazil and Paraguay meet and the Iguazu River joins the Parana.

Atria has about 600 barges. Balletbo said low water levels have paralyzed Atria’s operations transporting soybean oil and meal. Instead, goods are going overland to the Brazilian port of Paranagua and to granary ports on the edge of Paraguay’s capital Asuncion.

“Navigation has been stopped. We practically had no work,” added Roque Gomez, a 42-year-old shipyard worker in nearby Mayor Otano on the Paraguayan banks of the Parana. “We try to keep staff and survive through this.”

Weather experts have said the Parana’s decline could last at least into next year. October rains have given some respite but the longer-term forecast is not encouraging, with only average or below average water levels predicted into 2022.

“We need a period of rapid recharge of the river,” said Lucas Chamorro, head of hydrology at the Yacyreta hydroelectric plant, adding that human activity such as cattle ranching, burning lands and soybean farming is impacting the wider Pantanal wetland area as well as the Amazon.

Dionicio Gaona, a fish seller in Santa Rita, a town in the Alto Parana department of Paraguay about 340 kilometers (210 miles) east of the capital Asuncion, said the river’s decline has forced him to shift trades to support his family.

“It’s been hard because there have been so few fish,” Gaona said. “I’ve had to work as a bricklayer just to make ends meet.” 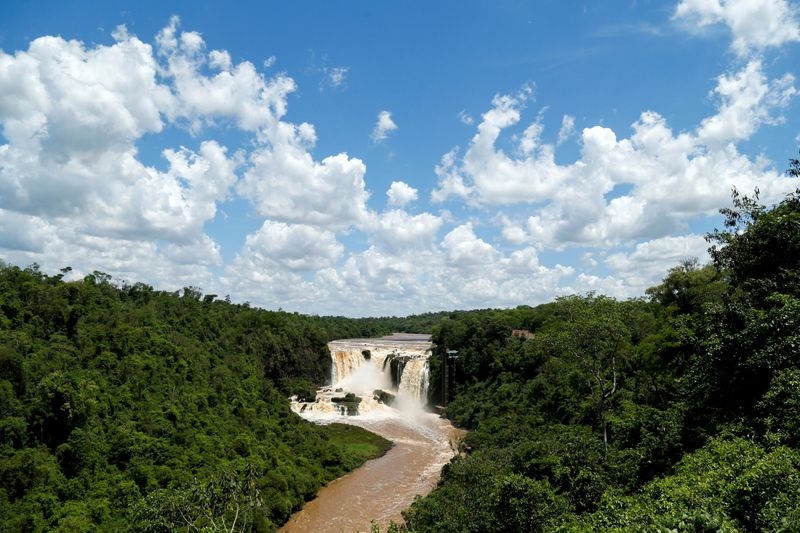 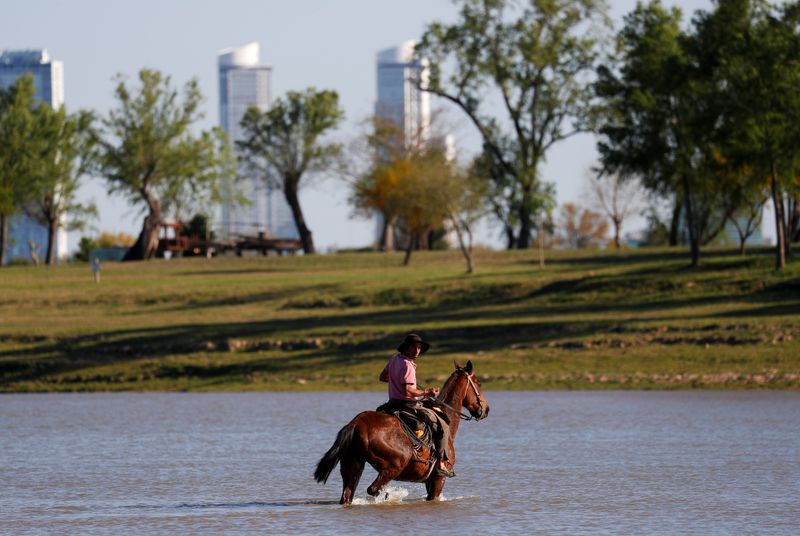 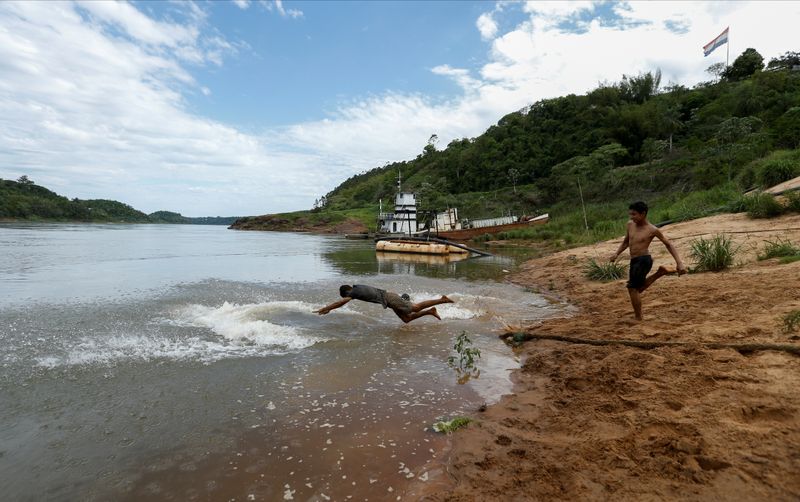 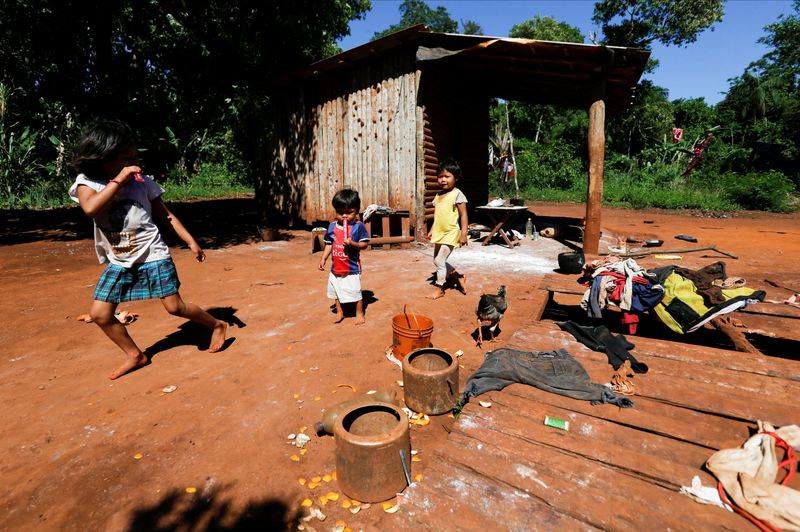 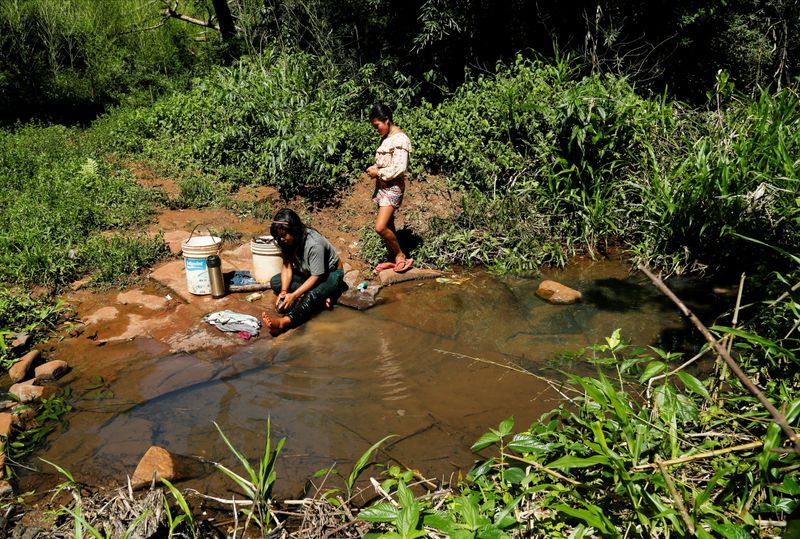