By Robert Muller and Yimou Lee

PRAGUE/TAIPEI – Self-ruled Taiwan needs to strengthen its defences and, with just 15 diplomatic allies in the world, seek more friends on the international stage as it faces pressure from China, Foreign Minister Joseph Wu said on Wednesday.

Tensions between Taiwan and China, which claims the fiercely democratic island as sovereign territory, have escalated in recent weeks as Beijing raises military and political pressure.

That has included repeated missions by Chinese warplanes in Taiwan’s air defence identification zone, or ADIZ, which covers a broader area than Taiwan’s territorial air space which Taiwan monitors and patrols to give it more time to respond to any threats.

China has never renounced the use of force to ensure eventual unification with Taiwan.

“The situation (in the strait) is growing tense and seems to be growing more dangerous,” Wu told reporters after meeting the Czech Republic’s second-highest ranking official, Senate speaker Milos Vystrcil, in Prague.

“There are several things we have been doing and are trying to do again and again. First is to beef up our defence capabilities. We think weakness is inviting aggression, and therefore we want to have the ability to defend ourselves, we are determined to defend ourselves,” Wu said.

The second thing was to add friends among the world’s countries, Wu said, so that Taiwan is not alone.

Beijing’s position is that the island of 23.5 million people is part of “one China” and has no right to recognition as a separate country. Only 15 countries in the world, most of them very small, recognise Taiwan.

Wu’s comments came shortly after Taiwan’s Ministry of Defence said that although the country did not seek any “arms race” with Beijing, the island would not bow to pressure.

In its report to parliament, the ministry described the situation in the Taiwan Strait that separates it from its giant neighbour as “severe and unstable” and labelled the actions of China’s military “provocation”.

“Taiwan will not engage in an arms race with the Chinese Communists’ military and will not seek military confrontation, hoping for peaceful coexistence across the strait,” it said.

“But in the face of the Chinese Communists’ threat to our national security, we will do our best to defend our country’s sovereignty and will never give in under duress.”

Foreign Minister Wu spoke during his trip to the Czech Republic and Slovakia which overlapped with a Taiwan trade delegation’s visit to the two countries and Lithuania.

China’s embassy in the Czech Republic condemned the Prague visit.

“The Czech Senate and other institutions and some politicians, despite China’s strong stance, insisted on allowing the visit… and gave platform for separatist activities. China condemns this strongly and will make legitimate and necessary steps,” the embassy said.

Wu arrived to the Czech capital on invitation from Vystrcil to honour the assistance that Taiwan gave the Czechs during the COVID-19 pandemic and also as the EU and NATO member country is opening more to cooperation with Taipei. 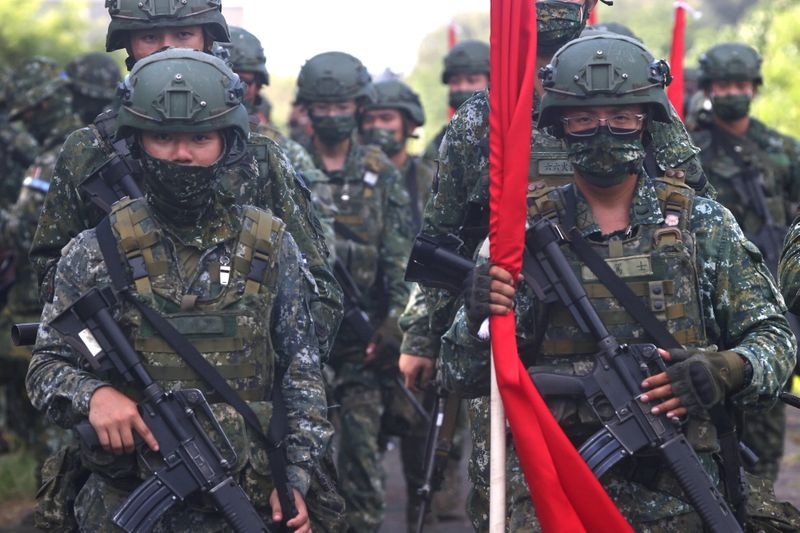