– Second-hand clothing firms are fighting to snap up smaller rivals and lock in investment as demand for thriftwear booms on the back of supply chain snarl-ups for traditional retailers ahead of the peak holiday shopping period.

Newly listed companies such as Poshmark Inc and ThredUp Inc are starting to scoop up smaller firms to fend off competition from deep-pocketed apparel brands such as Levi Strauss & Co and Urban Outfitters Inc, which have launched their own thrifting businesses.

Volume growth is essential for second-hand clothing companies to turn in steady profits in an industry notorious for tight margins and inconsistent inventory, analysts say.

“Companies like ThredUp and Poshmark have to demonstrate growth, and one of the things that they will probably do in the next few years is acquire other players, maybe in foreign countries,” Neil Saunders, managing director of research firm GlobalData, said.

The resale industry is expected to grow 11 times faster than the broader retail clothing sector in the period to 2025, according to GlobalData, driven also by a growing awareness of fast fashion’s environmental toll.

That could make the industry a magnet for deals as companies look to grow quickly to capitalize on a boom that industry estimates suggest could more than double the size of the U.S. second-hand apparel market to $76.4 billion by 2025.

Poshmark, a platform for peer-to-peer sales that takes a 20% cut of each transaction, made its first acquisition earlier this month, of a company that authenticates sneakers.

It is eyeing more takeover deals, especially in overseas markets, as it looks to put more than $500 million in cash on its balance sheet to work.

“So far, the four countries we’ve entered – U.S., Canada, Australia and India – have all been organic, but there certainly are opportunities for inorganic growth there as well,” CEO Manish Chandra told Reuters.

Rival ThredUp bought European thrift site Remix Global in July in a bid to expand beyond U.S. shores, an acquisition it said would “springboard” further expansion in Europe. It declined to comment on prospects for further deals.

The supply-chain disruptions making it hard for retailers to get fresh styles on their shelves – apparel had the highest online out-of-stock levels among U.S. retail sectors in the run-up to the holiday season, Adobe Analytics said – are benefiting second-hand sellers.

Richard Branson-backed resale marketplace Tradesy, which raised $67 million in a funding round earlier this year, expects shortages of new apparel to translate into strong holiday sales.

CEO Tracy DiNunzio told Reuters the company favored independent growth, but was open to “other possibilities”.

Other firms have found themselves ripe for investment from more established players. High-end thrift platform Vestiaire Collective raised $215 million this year as part of a financing round that included French luxury group Kering taking a 5% stake in the company.

“I can’t imagine any large clothing or fashion player not either partnering with or investing in or acquiring a successful (second-hand apparel) startup platform,” said Jon Copestake, a senior analyst at EY’s Global Consumer group.

Levi Strauss launched its own thrift website “Levi’s Secondhand” last year where it sells authenticated used denim it sources in large part from its own customers.

Other apparel companies such as Urban Outfitters are opting for a peer-to-peer marketplace, where the company connects buyers and sellers of used clothes and collects a 20% commission on sales.

With margins slim, beefing up sales volume counts. Urban Outfitters says focusing on a peer-to-peer model, in which a company provides a platform for deals between individuals rather than involving itself directly in sales, is key to making its business model work.

“This is a volume play. In a peer-to-peer marketplace model, scale is much more possible and there’s much more potential to do it quickly, because the platform is not the arbiter of supply,” its Chief Technology Officer David Hayne said.

(Reporting by Uday Sampath in Bengaluru; Editing by Anil D’Silva and Jan Harvey) 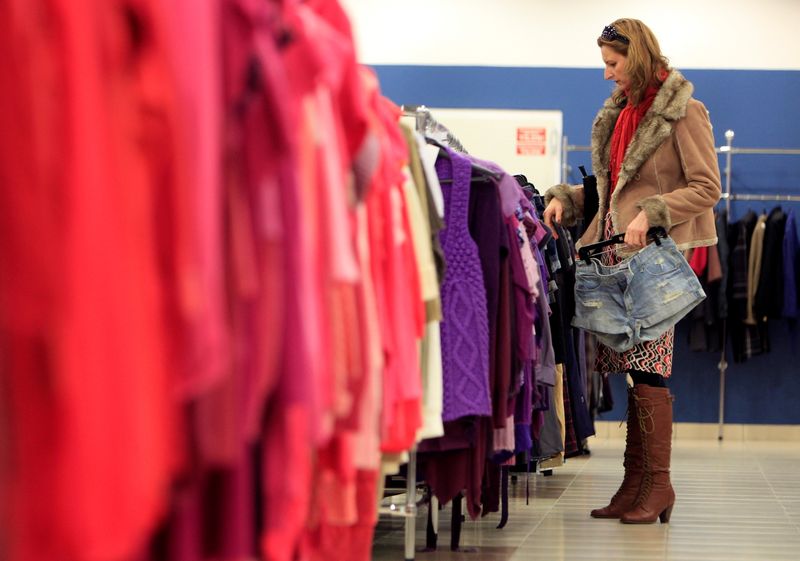