LONDON (Reuters) – The U.S. government’s assurances to Britain about how Julian Assange would be treated if extradited to the United States do not avert the risk of suicide, the WikiLeaks founder’s lawyers told a London court on Thursday.

The 50-year-old Australian is wanted in the United States to face trial on 18 charges including breaking an espionage law, after WikiLeaks published thousands of secret U.S. files and diplomatic cables in 2010.

The United States is appealing against a Jan. 4 ruling by a British judge that Assange should not be extradited because his mental health was such that he would likely commit suicide in a U.S. prison.

Assange’s lawyers told the Court of Appeal it should disregard assurances given by the United States as part of the appeal that he would not be subject to harsh detention conditions known as Special Administrative Measures (SAMs).

They said that regardless of whether he was technically subject to SAMs the evidence heard during the original extradition hearing showed he would be detained “in conditions of extreme isolation” that could drive him to suicide.

Lawyer Mark Summers also raised a report, published last month by Yahoo News, that alleged that in 2017 the CIA had considered killing or kidnapping Assange.

The CIA has declined to comment on the report, and lawyers representing the United States did not address it during their submissions to the court on Wednesday.

Summers said that the report showed there was a risk the CIA could use its powers to certify that Assange should be subjected to SAMs “the moment he sets foot in the USA”, and that the wording of the U.S. assurances would allow that to happen.

Assange, who denies any wrongdoing, is being held at Belmarsh Prison in London and was not in court during the hearing.

The appeal hearing was due to conclude by the end of Thursday, with the judges expected to give their decision at a later date.

WikiLeaks came to prominence in 2010 by publishing vast troves of confidential U.S. records which Washington said put lives in danger.

Soon afterwards, Sweden sought Assange’s extradition from Britain over allegations of sex crimes. He was ordered to be sent to Sweden in 2012, but instead fled to the Ecuadorean embassy in London and lived there for seven years.

He was dragged out in April 2019 and jailed for breaching his British bail conditions, although the Swedish case against him had been dropped. The U.S. authorities then sought his extradition.

Supporters see Assange as an anti-establishment hero victimised for exposing U.S. wrongdoing in Afghanistan and Iraq. Critics say he recklessly endangered the lives of agents named in the leaked material. 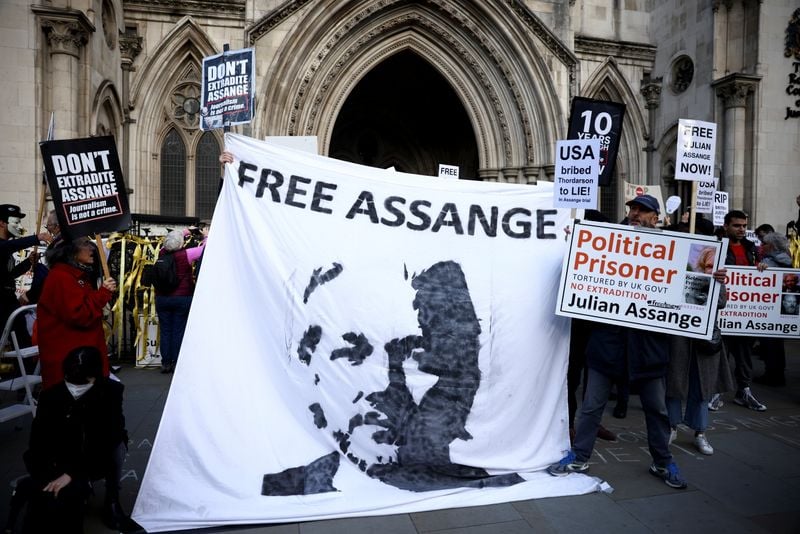