WASHINGTON -The Biden administration is working with international partners to prepare new sanctions that could be levied in response to Nicaragua’s Nov. 7 election, which Washington has denounced as a sham organized by President Daniel Ortega, U.S. officials say.

The U.S. government has also begun a review of Nicaragua’s participation in a Central America free trade agreement and has already halted support for any “trade capacity building” activities seen as benefiting Ortega’s government, a senior State Department official told Reuters on condition of anonymity.

President Joe Biden’s administration, building on sanctions imposed by his predecessor Donald Trump, has imposed punitive financial measures and U.S. travel bans on dozens of Nicaraguan officials, including Ortega family members, amid a government crackdown ahead of the election.

U.S. Secretary of State Antony Blinken said in a statement last week that Ortega, who is seeking a fourth term, and his wife, Vice President Rosario Murillo, were “preparing a sham election devoid of credibility, by silencing and arresting opponents.”

One U.S. government source said further sanctions were in the works for after the election, and the State Department official also signaled such a move was likely.

The Nicaraguan government and its embassy in Washington did not immediately respond to requests for comment.

Ortega said in June that sanctions would not deter him and his government was following the law in prosecuting people conspiring against him. He accused Washington in July of trying to undermine the elections and seeking to “again sow terrorism” in Nicaragua, an apparent reference to U.S. financing of right-wing “Contra” fighters in the 1980s.

“We’ll continue to use diplomatic and economic tools at our disposal to promote accountability for those who support the Ortega regime’s human rights abuses and attacks on Nicaraguan democracy,” the State Department official said.

“We do have sanctions tools. We are working with international partners, as well to work in multilateral fora, in ways that uphold our values, and we’ll continue to do so,” the official added.

Both officials declined to identify possible sanctions targets or provide the timing for new measures. The U.S. official said, however, that the next round could include not only people but also security force units or government-controlled companies linked to the crackdown.

The European Union has matched some U.S. sanctions but it is unclear how far the EU and regional governments are prepared to go to pressure Ortega. He has steadily tightened his grip on the Central American nation he has dominated since returning to power 15 years ago.

Still uncertain is whether the U.S. administration is considering directly targeting Ortega, a former Marxist guerrilla leader. Murillo, considered by U.S. officials to be a major powerbroker, is already under sanctions.

The Biden administration spearheaded a resolution last week by the Organization of American States that expressed “alarm” over the Nicaraguan government’s actions.

Since June alone, Ortega’s government has arrested dozens of opposition politicians, including presidential hopefuls, suspended a rival party and also cracked down on media critical of his rule.

U.S. officials have warned that Nicaragua’s membership in the CAFTA-DR regional trade agreement, which gives preferential treatment to Central American exports to the United States, could be in jeopardy if Ortega rigs the elections in his favor.

The State Department official confirmed that a review was already under way. “We’re continuing to review their participation in any U.S.-sponsored assistance program,” the official said.

The official acknowledged, however, that the administration was discussing potential legal obstacles to any suspension of Nicaragua from the trade pact, which some experts have suggested could complicate any action.

One person familiar with the matter said there were also concerns within the administration that Nicaragua’s removal could hit its struggling economy hard enough to worsen Nicaraguans’ humanitarian plight, spurring further migration toward the U.S.-Mexico border.

About half of Nicaragua’s exports go to the United States, with duties kept low under CAFTA-DR. 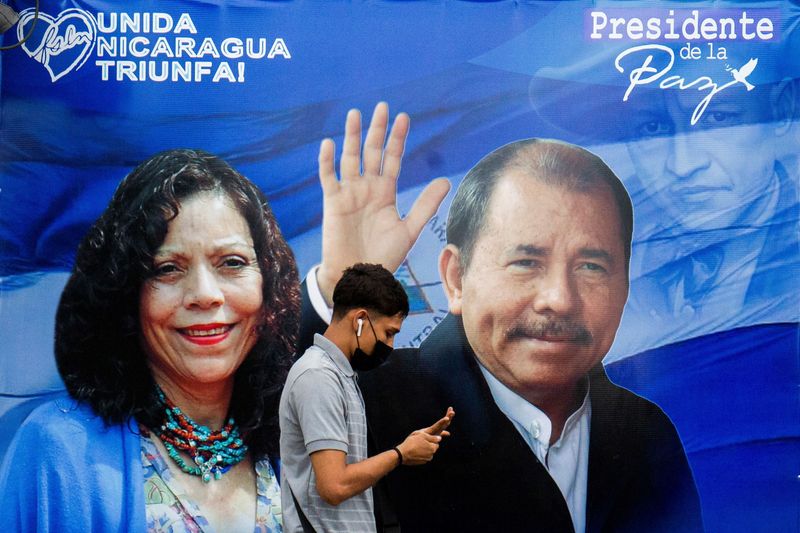