By Jan Strupczewski and Gavin Jones

ROME (Reuters) – The world’s 20 richest countries will commit this weekend to tackling the existential threat of climate change, paving the way for more detailed action at a U.N. climate change summit next week, according to a draft communique seen by Reuters.

Leaders of Group of 20, who gather for talks on Saturday and Sunday in Rome, will pledge to take urgent steps to reach the goal of limiting global warming to 1.5 degrees Celsius, according to the draft.

They will then head to Glasgow, Scotland for a crucial United Nations gathering of almost 200 countries, known as “COP26”.

The landmark 2015 Paris agreement committed signatories to keeping global warming to “well below” 2 degrees above pre-industrial levels, and preferably to 1.5 degrees.


Since then, as extreme weather episodes have intensified and carbon levels in the atmosphere have grown, climate scientists have increasingly emphasised the importance of a 1.5 degree cap to limit the risk of environmental catastrophe.

“Responding to the call of the scientific community, noting the alarming reports of the IPCC (Intergovernmental Panel on Climate Change) and mindful of our leadership role, we commit to tackle the existential challenge of climate change,” the draft, which might still be changed, said.

“We recognize that the impacts of climate change at 1.5 degrees are much lower than at 2 degrees and that immediate action must be taken to keep 1.5 degrees within reach,” the G20 said.

“We acknowledge the key relevance of achieving global net zero greenhouse gas emissions or carbon neutrality by 2050,” the statement said, referring to a recommendation by UN climate experts who say the mid-century deadline is crucial to meet the 1.5 degree warming limit.

However, the 2050 date appears in the draft in brackets, indicating it is still subject to negotiation.

Some of the world’s biggest polluters say they cannot reach the 2050 target date, with China, by far the largest carbon emitter, aiming for 2060.

The G20 bloc, which includes Brazil, China, India, Germany and the United States, accounts for more than 80% of the world’s gross domestic product, 60% of its population and an estimated 80% of global greenhouse gas emissions.

The G20 reaffirmed a commitment to “phase out and rationalise” fossil fuel subsidies by 2025 and to curb coal power, considered a principal culprit of global warming.

The leaders said they will “do their utmost” to avoid building new unabated coal plants, adding the phrase “taking national circumstances into account,” which is commonly used to avoid firm commitments.

The leaders said they would end public finance for overseas coal plants by the end of this year and aim for a “largely decarbonised” power system in the 2030s, according to the draft.

They also pledged to cut their collective emissions of methane, a greenhouse gas which is much more potent but less long-lasting than carbon dioxide, “substantially” by 2030. This deadline is also in brackets.

The willingness of developed countries to help finance the ecological transition of poorer ones, known as “climate financing”, is likely to be crucial to the success of the G20 and the Glasgow summit.

“We stress the importance of fulfilling the joint commitment of developed countries to mobilise $100 billion annually from public and private sources through to 2025 to address the needs of developing countries, in the context of meaningful mitigation actions and transparency on implementation,” the draft said.

Richer countries agreed in 2009 to establish a $100 billion per year fund to help transfer technologies and minimise climate risks in the developing world, but progress has been slow.

Alok Sharma, President of the COP26 conference, said this week he hoped the fund would be made available in 2023, three years later than planned, and many developing nations are reluctant to commit to accelerating their emissions reductions until rich ones meet their pledges.

A Chinese environment official said on Wednesday this was “the biggest obstacle” to progress in the climate talks.

The G20 draft calls in brackets for “additional climate financing”, suggesting there is plenty of negotiating still to be done on this issue. 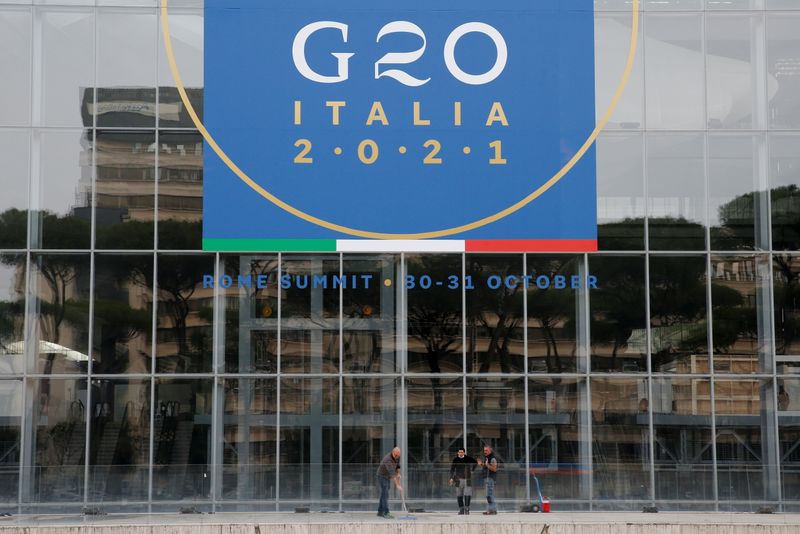