By John McCrank and Tom Wilson

NEW YORK/LONDON -Investors clamoring for Robinhood Markets to host shiba inu, a meme-inspired cryptocurrency that has soared in value this month, may need to bide their time as the app-based brokerage says it is in no hurry to list new currencies and analysts expect revenue growth to come from elsewhere.

Shiba inu is a spinoff of dogecoin, itself born as a satire of a cryptocurrency frenzy in 2013, and has almost no practical use. Yet its price has rocketed by as much as 1,000% this month, leapfrogging dogecoin to become the world’s eighth largest cryptocurrency with a $42 billion market cap.

The currency’s eye-watering rally has Robinhood users demanding a piece of the action.

The No. 1 question https://app.saytechnologies.com/robinhood-2021-q3?filter=all&sort=num_upvotes on Robinhood’s Say Technology platform, which crowdsources questions from retail investors prior to the brokerage’s earnings call earlier this week, asked when it will add new coins such as shiba inu.

Separately, an online petition https://www.change.org/p/robinhood-convince-robinhood-they-will-prosper-if-they-list-shiba-inu-coin asking Robinhood to list shiba inu has nearly 400,000 signatures, while #SHIB was trending on Twitter with a barrage of tweets of “When #shiba” aimed at Robinhood.

Investors can buy shiba inu on some cryptocurrency trading platforms, such as Coinbase. Being able to trade it on Robinhood, which generally has lower fees than its competitors, would allow the company’s users to move between crypto, stocks and options on one platform.

The brokerage said this week it plans to wait for more regulatory clarity around any new digital currencies it may list.

Regulators globally have been cracking down on the rapidly expanding cryptocurrency market, including the U.S. Securities and Exchange Commission, which has said it is scrutinizing several aspects of digital currencies, including the offer and sale of crypto tokens.

Robinhood currently lists seven cryptocurrencies including dogecoin, which made up 62% of its cryptocurrency transaction volume in the second quarter, boosting its results.

The listing of the trendy shiba inu coin could lead to a similar volume spike, but catering to client demands on crypto may come with its own set of risks.

If investors continue seeking out newer coins for the prospect of faster returns, crypto platforms will need to stay on their toes to keep their clients happy, said Mati Greenspan, CEO of crypto advisory and analysis at Quantum Capital.

“For an exchange that might mean … relaxing their pathway to acceptance by reducing due diligence and eventually they could end up accidentally listing useless coins, or even scams,” he said.

At the same time, as a brokerage “you never want to be the last … to list a coin, because that’s the point at which price typically collapses,” said Joseph Edwards, head of research at crypto broker Enigma Securities in London. “So there’s something of a game of chicken between these exchanges as a result.”

“Brokers will always chase the trends with regards to facilitating market access to whatever the flavor of the month is … for the sake of their short-term profitability,” he said.

Robinhood’s revenues from crypto trading have grown by 860% over the last year, as retail investor interest in cryptocurrencies boomed, bring the brokerage millions of new customers.

But those revenues plunged 78% from the second quarter, the company said earlier this week, far more than the around 35% industry-wide drop in crypto trading volumes.

Shares of Robinhood tumbled this week after the retail broker reported softer revenue than expected.

Robinhood, which was founded in 2013 with a commission-free model that has become the industry norm, surged in popularity during COVID-19 lockdowns, when sports and most other forms of entertainment were put on hold, and trading in so-called meme stocks became a national pastime among young investors.

Robinhood recently said it will launch crypto wallets early next year, which allow its users to transfer cryptocurrencies to and from their Robinhood accounts, and on Tuesday said more than 1 million people have signed up for the service. Unless dogecoin’s price spikes again, and absent the listing of new coins, a successful launch of the crypto wallets is essential to Robinhood’s crypto revenues returning to anywhere near their second quarter levels, said Piper Sandler’s O’Neill. 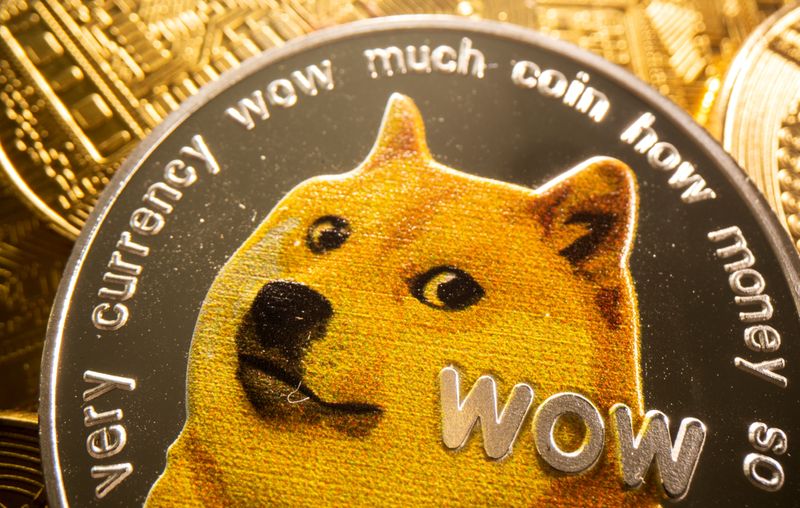