By Alexandra Alper and Karen Freifeld

WASHINGTON – Republican Senator Tom Cotton has removed his hold on President Joe Biden’s nominee for a key post in the U.S.-China tech battle, after the official said he would “aggressively” police tech exports to Beijing, according to a Cotton aide and a document seen by Reuters.

The decision removes a hurdle to a final confirmation vote on Alan Estevez’s nomination as undersecretary for the U.S. Commerce Department’s Bureau of Industry and Security (BIS), but it is unclear whether Democratic Senator Bob Menendez, who opposed the nominee in a committee vote, will allow the process to move ahead quickly.

Estevez, a former Pentagon official, was nominated in July for the position at BIS, the agency that oversees U.S. exports and which has found itself at the center of the U.S.-China tech war.

But Cotton last month placed a “hold” on a final Senate confirmation vote, demanding answers to written questions aimed at assessing whether Estevez would tow a hard line on China. A Cotton aide told Reuters on Monday that the senator from Arkansas had removed his hold after receiving a letter from the nominee.

In a written response dated Oct. 29 and seen by Reuters, Estevez said he would do his best to accelerate the roll-out of new rules on advanced technologies and, if appropriate, strengthen U.S. restrictions on sales of semiconductor software and technology.

He also promised to consider extending a rule that restricts the overseas sale of semiconductor chips to Huawei Technologies, the Chinese telecommunications equipment maker blacklisted by the United States, to other blacklisted Chinese firms with links to the military or human rights violations.

“I will not hesitate to aggressively use the tools available at BIS to control exports of technologies that can harm our national security and foreign policy interests,” Estevez wrote in his response to Cotton and Republican Senator Bill Hagerty, who co-signed the letter to Estevez last month.

Estevez added that it was “imperative” for the Biden administration to keep China from reaching its goal of matching or surpassing U.S. military might.

Any senator can hold up a fast-track confirmation process that requires consent by all 100 senators.

Menendez came out against Estevez when the Senate Banking Committee took up his confirmation and later also opposed expediting a final full vote in the Senate.

The New Jersey Democrat’s opposition stems from Estevez’s response to questions regarding returning oversight of U.S. fire arms exports to the State Department. A spokesman for Menendez on Tuesday told Reuters the issue still had not been resolved.

The Commerce Department did not immediately respond to a request for comment. 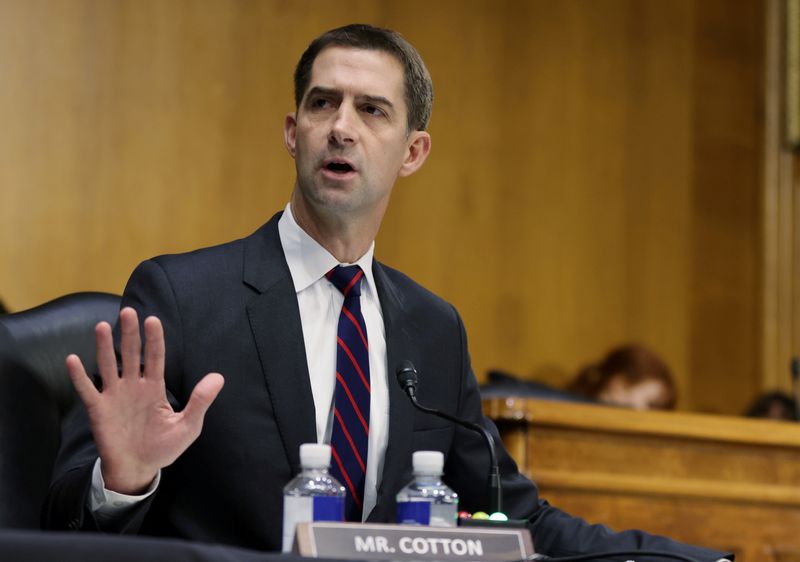