– The U.S. Federal Reserve is set to announce on Wednesday it will begin to reduce its asset purchase program as early as this month, removing a first pillar of emergency monetary policy accommodation introduced in March 2020 to shield the economy from the COVID-19 pandemic.

Here’s a guide to why and how the Fed is cutting back on this key component of its crisis-era support and what that means for the size of its future balance sheet.

WHAT IS THE FED’S ASSET PURCHASE PROGRAM?

The Fed has gobbled up trillions in Treasuries and mortgage-backed bonds since the onset of the pandemic in a process known as quantitative easing to lower long-term interest rates, keep financial conditions loose and help spur demand, similar to the playbook used following the 2007-2009 financial crisis and recession.

It currently buys $80 billion in Treasuries and $40 billion in housing-backed securities each month. Since it began the program, the Fed’s balance sheet has swelled to $8.6 trillion from $4.4 trillion. An $8 trillion stash of Treasuries and MBS account for most of its total holdings.

WHY WILL IT BEGIN TO TAPER THOSE PURCHASES?

The economy, on pace to expand this year at the fastest rate since the 1980s, no longer needs such extreme measures of support and keeping them in place could do more harm than good. For example, low mortgage rates have fueled a boom in house prices, but the problems that now afflict the economy are mostly supply issues while demand, which the bond buys most directly affect, is buoyant and shows no sign of faltering.

“They are doing it because the economy is really strong… The economy can stand on its own,” said Julia Coronado, a former Fed economist and president of economic advisory firm MacroPolicy Perspectives.

(GRAPHIC: Get ready to taper – https://graphics.reuters.com/USA-FED/dwvkraoolpm/chart.png)

HOW DOES TAPERING WORK?

Most likely in mid-November, the Fed will each month begin to reduce the amount of Treasury securities purchases by $10 billion and mortgage-backed securities by $5 billion, phasing them out completely by next June. The Fed doesn’t stop the bond buys all at once “to avoid jolting financial markets and sending (market) rates higher than they would (naturally) be,” said Kathy Bostjancic, chief U.S. economist at Oxford Economics.

Officials have flagged they expect the roll-off to run on autopilot but could speed up or slow the pace of purchases if need be. The expected eight-month pace of tapering is also much faster than last time, indicative of the Fed’s confidence in the sharpest recovery in decades and a desire to be in a position to raise interest rates from near zero next year if inflation remains persistently high.

By next June, the Fed’s balance sheet will sit at just over $9 trillion, about $8.4 trillion of which will be bonds associated with multiple rounds of QE dating back to the financial crisis more than a decade ago. The question is what to do after that.

Last time, the Fed started to shrink its balance sheet two years after it began to raise its main short-term interest rate, also known as the Fed funds rate, by not replacing securities as they matured. Fed watchers think the central bank will also be patient and passive this time around, not least because it reduced the balance sheet too much in 2018-19.

That resulted in demand for bank reserves outstripping the Fed’s supply, causing volatility in short-term money markets and a U-turn from the Fed, which was forced to increase the balance sheet again to improve financial market functioning.

BUT IT WILL REDUCE ITS BALANCE SHEET, RIGHT?

Not necessarily. Last time around the Fed was focused on reducing its balance sheet because there was some discomfort with it as an untested policy tool. Having used their balance sheet as a main plank of policy twice since the Great Recession “officials now understand that it’s going to be brought out next recession and it’s going to be a tool in the toolkit,” said Coronado.

One option, already flagged by Fed Chair Jerome Powell, would be to just hold the balance sheet steady and let the economy grow into it. As gross domestic product grows, the balance sheet would effectively shrink as a percentage of GDP, exerting less influence over time. The total balance sheet as a share of nominal GDP is now almost 36%, roughly twice what it was before the pandemic.

Others are not so sure, arguing that keeping too large a permanent balance sheet could limit its effectiveness come the next recession and might sway the Fed to reduce its size again. “These numbers are big no matter how you look at them… There are reasons to think about ‘normalizing’ some of these policy tools over time. I do think they will probably perceive some benefits, in that it will open up greater scope for doing more quantitative easing next time,” said Matthew Luzzetti, chief U.S. economist at Deutsche Bank.

WHAT DO FED POLICYMAKERS SAY?

So far, few policymakers have weighed in decisively. Fed Governor Christopher Waller last month called for a shrinking of the balance sheet over the next couple of years by letting maturing securities roll off, similar to last time. Kansas City Fed President Esther George said in September the Fed may want to keep longer-term rates low by retaining a large balance sheet, but counter that stimulus with a higher Fed funds rate. That, however, might raise the risk of an inverted yield curve, an argument for shrinking the balance sheet, George also said, neatly illustrating the conundrum Fed officials face as they ramp up discussions in the months ahead. 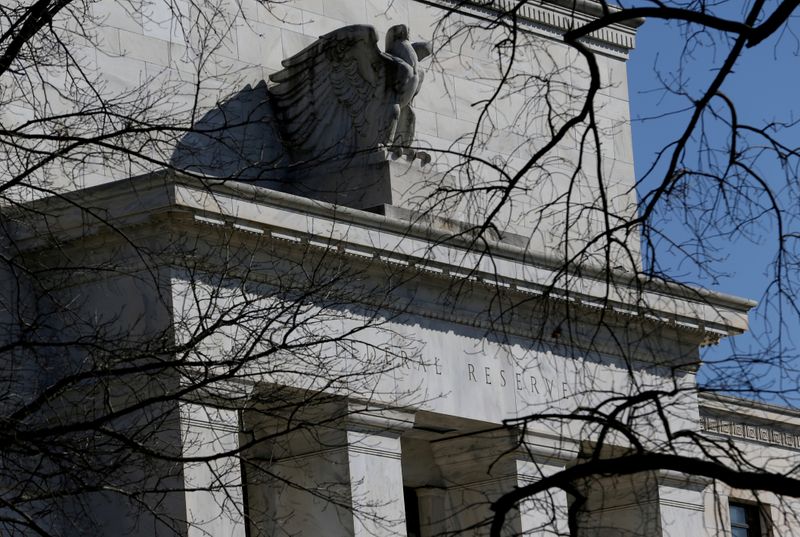