(Reuters) – Eric Adams, the next mayor of New York City, has his work cut out for him.

The largest U.S. city is in the midst of a halting recovery from a coronavirus pandemic that killed more than 34,000 residents and erased half a million jobs, all while grappling with deep-seated issues such as crime, income inequality and a lack of affordable housing.

“We’re having tough times. But winners want the ball when the game is on the line,” Adams told MSNBC on Wednesday, after cruising past Republican Curtis Sliwa in Tuesday’s election to become New York City’s second Black mayor. “We need to move now to make sure we create a safe environment for our city, and on that foundation we can build upon.”


The scale of his challenge is immense.

The city’s unemployment rate in September was 8.9%, double that of some other U.S. metropolitan areas, according to the state’s labor department. The return-to-office rate in New York – the country’s largest economic center – is also lower than in most other cities.

The city’s vital tourism industry remains battered, though visitors from abroad, who spend more than domestic tourists, will finally be allowed back into the United States starting next week as COVID-related travel restrictions ease.

They will encounter a city struggling to address a homelessness crisis exacerbated by the pandemic and higher crime rates. Murders are up more than 40% and shooting incidents have doubled since the same point in 2019, though crime still remains much lower than in the 1980s and 1990s.

Adams, who takes office on Jan. 1, has promised a more moderate approach than his liberal predecessor, Bill de Blasio, in numerous areas, including policing, education and business.

The former police captain put public safety at the center of his campaign, arguing that the city could never fully rebound economically unless it first addressed a spike in violent crime.

He proposed increasing patrols on the subway system to curb assaults and at one point suggested he might return to a limited form of stop-and-frisk, a strategy that a federal judge found illegally targeted minorities.

But he also has said he will increase diversity in the police department’s senior ranks, including hiring a female commissioner for the first time, and will not tolerate misconduct.

“He does understand police officers and policing, and the mindset of the NYPD, in ways that no mayor has ever understood it,” said Christina Greer, a political science professor at Fordham University in New York. “He understands that nuance.”

Adams was backed by several major labor unions during the crowded Democratic nominating contest earlier this year. The self-described “blue-collar” New Yorker, who grew up poor in the city, has frequently vowed to give voice to the working class and people of color he says have been forgotten.

However, he is also widely seen as far more business-friendly than de Blasio, who often took aim at Wall Street. Adams’ campaign took in significant money from wealthy executives, and he spoke often of working closely with big business to help the city recover.

In an interview with CNBC on Wednesday, he said he would seek to strengthen ties between City Hall and business leaders.

“Let’s hit reset. We understand we did not have a good relationship,” Adams said.

“He both understands the critical role that business plays as a source of jobs, tax revenues and economic activity, and he wants to make it as easy and attractive as possible to run a business and put people to work in the city,” said Kathryn Wylde, chief executive of the pro-business Partnership for New York City. “It’s a complete reversal of what had been an historic anti-business policy.”

Adams has expressed support for charter schools and said he would preserve the city’s gifted program, which critics say funnels predominantly white students into better schools at the expense of Black and Latino children.

Cuomo and de Blasio famously feuded for years over issues large and small, and they did little to hide their mutual disdain.

Perhaps Adams’ most innovative policy proposal is a new “MyCity” app, a clearinghouse portal that his campaign said would allow any New Yorker to access every city service he or she is entitled to, from food stamps to housing to childcare. 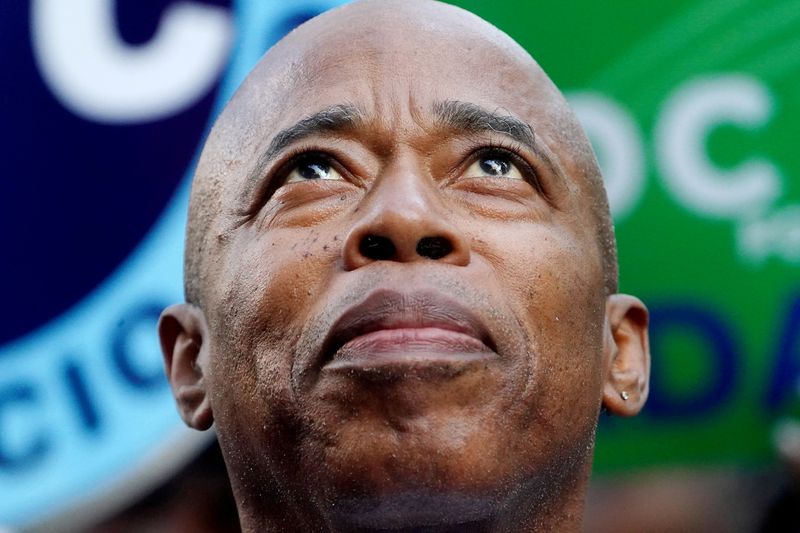