By Anisha Sircar and Shreyashi Sanyal

-European shares rose for a fifth straight session on Thursday to hit record highs as investors took comfort from the U.S. Federal Reserve signalling it was in no hurry to hike interest rates, while the Bank of England left its benchmark rate at an all-time low.

The pan-European STOXX 600 closed 0.4% higher after spending most of the day in positive territory after the Fed, as expected, said it would begin scaling back its monthly bond purchases in November with plans to end them next year.

“What we’ve heard from the Fed is that next year central banks are going to be easing off the accelerator, but they won’t be hitting the brakes,” said Hugh Gimber, global market strategist at JP Morgan Asset Management.

The European Central Bank also signalled on Wednesday that it was in no rush to tighten policy.

The Bank of England, meanwhile, caught investors by surprise, as it left its benchmark lending rate unchanged, slamming sterling and lifting London’s FTSE 100 by 0.4%.[.L][GBP/]

“The fact the (BoE) vote wasn’t even close to a majority in favour of a rate hike suggests that rates could remain on hold for some several months to come,” said David Madden, market analyst at Equiti Capital.

The STOXX 600 has hit a series of all-time highs in November, driven by a relatively strong earnings season despite rising cost pressures.

The euro zone’s volatility gauge fell further to its lowest since mid-June.

Gains on the STOXX 600 were led by a 2.3% jump in real estate stocks after a takeover offer for German real estate company Alstria Office REIT AG from Canadian investment firm Brookfield.

Drugmaker Roche gained 0.5% after it bought back its nearly one-third voting stake from rival Novartis for $20.7 billion. Novartis was up 2.4%.

Germany’s blue-chip index DAX rose 0.4%, hitting a record high, after strong earnings from Deutsche Post led to a 3.0% rise in its stock. 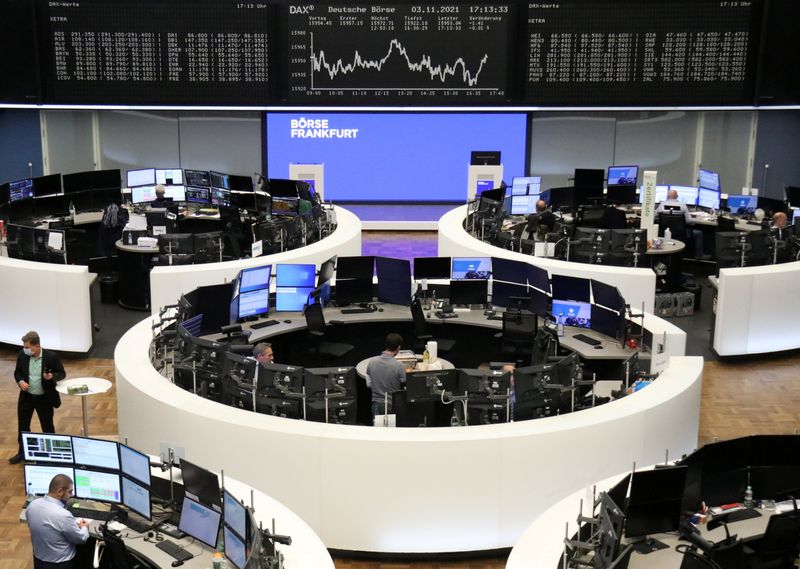