NAIROBI – Rebellious forces from Ethiopia’s Tigray region have pushed to within a day’s drive of the capital Addis Ababa and are threatening to march on the city of 5 million people.

But any denouement to the year-long war could take far longer to play out.

Forces loyal to the Tigray People’s Liberation Front (TPLF)would have to fight through hostile territory in the neighbouring region of Amhara to reach Addis.

They could also face resistance from other Ethiopians who fear the return to power of a party that ruled with an iron fist for the nearly three decades it dominated central government before Prime Minister Abiy Ahmed took office in 2018.

Oromiya, the region that surrounds Addis Ababa, is divided. Abiy is part Oromo and support from Ethiopia’s largest ethnic group helped propel him to power after years of anti-government protests.

He lost some of that support when security forces detained thousands of Oromos, some of whom accused him of not doing enough for the community. Several Oromo leaders were also detained in the wake of deadly riots that killed hundreds.

The TPLF has since forged an alliance with the Oromo Liberation Army (OLA), which is also fighting the central government. This week, both groups said they had seized strategic towns in Amhara and were considering advancing on Addis Ababa.

On Friday, the TPLF and OLA were due to sign an alliance in Washington with seven other rebel groups.

Billene Seyoum, the prime minister’s spokeswoman, said the alliance could not be relied on to deliver democracy.

“The opening up of the political space three years ago provided ample opportunity for contenders to settle their differences at the ballot box in June 2021,” she said in a tweet.

Regional diplomats, speaking on condition of anonymity, said the threats to march on Addis could be a tactic to try to force Abiy into negotiations or to step down. TPLF spokesman Getachew Reda, who did not respond to requests for comment, has said there should be an interim government and Abiy should be put on trial.

Ethiopian officials have accused Tigrayan forces of exaggerating territorial gains. Spokespeople for the government and military did not return calls seeking comment on the threats by both groups.

Tigrayan forces could instead try to increase pressure on Abiy’s government by cutting off the landlocked country from the region’s main seaport. They could also enter the capital with or behind their Oromo allies.

“The operation will be spearheaded by the OLA,” said Oda Tarbii, an OLA spokesman. “This is simply our land and therefore within our jurisdiction.”

The conflict in what was once considered a stable Western ally in a volatile region has killed thousands of people, plunged around 400,000 in Tigray into famine, and sent more than 2.5 million fleeing their homes.

Abiy sent troops into Tigray last November, accusing its governing party, the TPLF, of mounting surprise attacks on military bases in the region. The TPLF said it acted because the military was preparing to strike after the region held an election in September 2020 in defiance of federal orders.

Forces from Amhara, Ethiopia’s second most-populous region, mobilized in support of Abiy’s government. Tigray and Amhara have a long-running border dispute, and Amhara took control of territory in the west of Tigray. Violence has also flared along the Oromo-Amhara border.

William Davison, a senior analyst at the International Crisis Group think tank, said there could be a severe backlash if Tigrayan and Oromo forces took the capital.

“Amhara region might go into outright rebellion if the Tigray forces with OLA control Addis Ababa. Amharas are not only angry at the TPLF and OLA but also at federal leaders for leaving Amhara exposed,” he said.

Fighting their way into the capital – home to the African Union headquarters and many international delegations – could be bloody.

Addis Ababa has been a hotbed of opposition to TPLF rule since the party oversaw a crackdown https://www.reuters.com/article/idUSL26284307 that netted 30,000 people following elections in 2005.

“I don’t think TPLF will make it to Addis Ababa. I am not scared at all,” said Teferi Mekonnen, a 30-year-old employee at a petrol station, on Thursday. “If the government gives me a weapon and asks me to fight, I will. No one is willing to see them back.”

Abiy might also call on Eritrea for help again. Eritrean troops entered Tigray in November to support Ethiopian soldiers; they mostly pulled out in June after a a flood of reports of mass killings of civilians and gang rapes. Eritrea has denied committing abuses.

Calls are growing from international partners for a ceasefire and talks, including from regional heavyweights Uganda and Kenya and donors like the European Union and United States, which suspended Ethiopia’s valued duty-free trade access this week.

So far there is little sign either side wants talks. But a few Ethiopian voices are starting to publicly call for peace.

“Abiy’s authority has remained intact so far,” said Davison. “But given all the pressure, it is possible that the floodgates (of discontent) could open.” 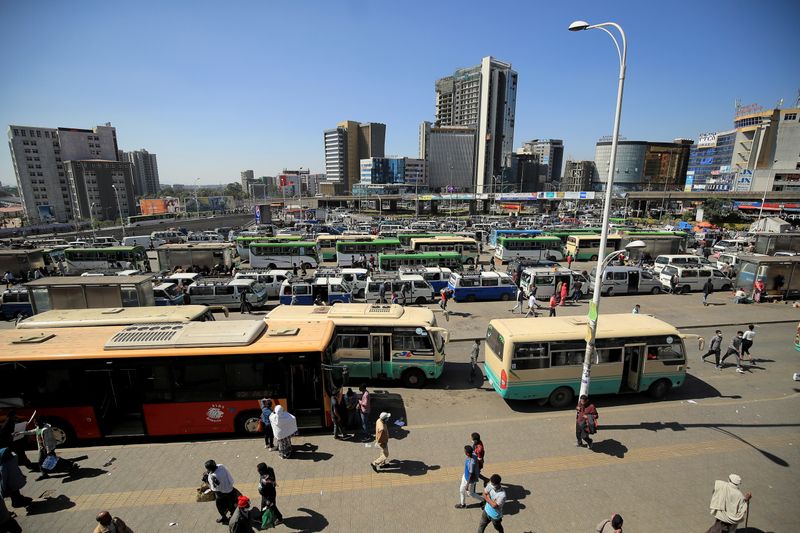