By Khalid Abdelaziz and Nafisa Eltahir

CAIRO – Sudan’s military rulers have been drawing on veteran ex-officials of toppled leader Omar al-Bashir for key posts in the state bureaucracy, in what critics see as a sign that they are seeking to cement control after seizing power in a coup.

Lacking a political base of his own, military leader Abdel Fattah al-Burhan, a career army officer, is resorting to an alliance of convenience with figures he helped force from power when Bashir was overthrown in 2019, analysts say.

The moves suggest Burhan is seeking to consolidate the military’s takeover, ignoring calls by much of the international community to return to the civilian-military power-sharing arrangement that was meant to lead to elections in 2023.

Burhan’s media adviser could not be reached for comment. A senior source still working in the government denied that those appointed recently were “remnants” of Bashir’s rule, saying their nominations were made according to regular bureaucratic procedures.

Sadeq told Reuters that he moved into his position due to seniority.

“I am not affiliated with any former regime. I am just doing my job as a civil servant,” he told Reuters.

Kareem and Houri could not be reached for comment.

Officials have also been replaced in senior positions in state banks, media, and the regional government in Khartoum State and other states.

By giving jobs to former appointees of Bashir, an autocrat and military man associated by many Sudanese with years of isolation and U.S. sanctions, Burhan may only stiffen popular opposition to the takeover and narrow the space for compromise, critics say.

At the same time, public servants appointed under the civilian Forces of Freedom and Change (FFC) coalition that was sharing power with the military before the coup are being dismissed or reassigned, government employees and political groups say. Many Sudanese saw the appointment of non-political technocrats as one of the few tangible gains of the transition.

In a sign of brewing discord over the appointments, dozens of people were arrested at a sit-in to oppose handovers to military appointees at Khartoum State’s education ministry building on Sunday, according to a teachers’ union.

In a statement on Wednesday, Khartoum State health officials rejected their dismissals and the appointment of those they said had “submitted to the military, betrayed their oath, and disavowed the revolution”.

Another target of the coup was a taskforce set up to dismantle Bashir’s rule by seizing assets and removing supporters from public jobs. Several of the taskforce’s senior members have been arrested, and late on Tuesday Burhan announced a committee to review its work.

Civilian factions bent on reversing the coup are alarmed.

In a statement urging peaceful resistance to the takeover, the political bureau of Sudan’s Umma Party said it rejected “all decisions issued by the coup leader regarding the dismissal of civil service leaders not loyal to the coup and their replacement by cadres of the defeated National Congress”.

The Sudanese Journalists Network accused the military of using NCP figures to purge public servants appointed by the transitional government after Bashir’s ouster, and to crack down on trade union committees and leaders of a civil disobedience campaign against the coup.

The NCP, which was still issuing statements before the coup despite being dissolved, has made no public comment on the takeover.

The coup halted a military-civilian power-sharing deal agreed in 2019 after the army toppled Bashir following months of street protests. Burhan led a joint ruling council but was meant to hand leadership to a civilian ahead of elections in 2023.

After detaining top civilians and placing Prime Minister Abdalla Hamdok under house arrest on Oct. 25, Burhan said he would name a government of technocrats, but has yet to do so. Efforts involving the United Nations to secure the release of politicians and a return to power sharing have stalled.

Burhan has used the time to place people loyal to the military and the state in jobs controlling vital infrastructure, banks, and trade, said Sudanese analyst Magdi El Gizouli.

“He’s doing what every government ruler does, sort out the bureaucracy and find people who are loyal,” he said. “He’s creating a de facto situation ahead of the cabinet.”

Burhan has said he dissolved transitional bodies to prevent squabbling political factions critical of the military from destabilising the country. He says he is committed to democratic transition and that elections will still be held in 2023.

The protest movement that drove demonstrations against Bashir and mobilised again in the build up to the Oct. 25 coup is calling for the military to exit politics altogether.

Though a blackout on internet services hampered a civil disobedience campaign on Sunday and Monday, hundreds of thousands have turned out for mass rallies against the military, with another “march of millions” planned for Nov. 13.

Burhan also faces an economic crisis that triggered the revolt against Bashir and continued after his overthrow. Aid that had begun to flow from the West to help Sudan’s transition has been paused, and a resolution calling for sanctions against coup leaders has been tabled in the U.S. Congress.

Any lasting alliance between Burhan and former regime factions may be complicated by their resentment over Burhan’s role as a senior army leader in toppling Bashir in 2019.

Burhan is close to the United Arab Emirates and Saudi Arabia as well as to neighbour Egypt. But such regional powers, which have worked hard to roll back the influence of the Muslim Brotherhood, would object to a coalition between Burhan and Bashir’s Islamist allies, a diplomatic source said. 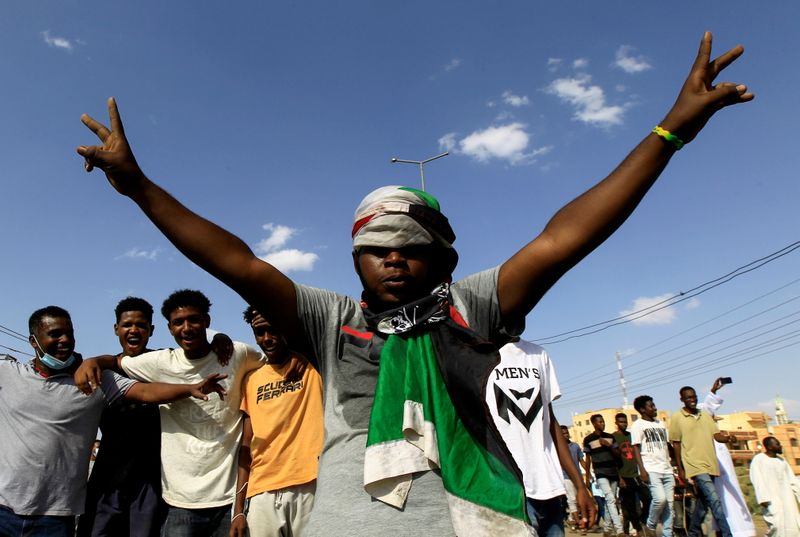