By Andrea Shalal and Ahmed Aboulenein

WASHINGTON – President Joe Biden on Friday said he would nominate Robert Califf for a second stint as commissioner of the U.S. Food and Drug Administration, and urged the Senate to swiftly confirm him.

Califf, 70, a well-regarded cardiologist and researcher closely linked with the pharmaceutical industry, served as FDA commissioner from February 2016 until the end of then-President Barack Obama’s second term in January 2017.

“Dr. Robert Califf is one of the most experienced clinical trialists in the country, and has the experience and expertise to lead the Food and Drug Administration during a critical time in our nation’s fight to put an end to the coronavirus pandemic,” Biden said in a statement issued by the White House.

Califf was confirmed for his first term by the Senate 89-4 with broad bipartisan support, though at the time he faced criticism from some Democrats, like Senators Bernie Sanders of Vermont and Joe Manchin of West Virginia, who said his ties to the drug industry made him unfit to regulate it impartially.

At the time, Califf had co-authored papers with industry executives and served as a consultant for drugmakers. He was since hired by Google parent Alphabet Inc in 2019, and currently serves as the head of Clinical Policy and Strategy across its Google Health and Verily Life Sciences enterprises.

He is also on the board of drugmaker Cytokinetics Inc and has received consulting fees from pharmaceutical companies Amgen Inc, Boehringer Ingelheim, Biogen Inc, Eli Lilly and Co, Roche AG’s Genentech unit, and Merck & Co Inc.

“Dr. Califf had strong bipartisan support in the Senate in 2016, and I urge the Senate to swiftly confirm Dr. Califf so he can continue the important work being done at this critical moment,” Biden said in the White House statement.

“We hope the confirmation process will proceed quickly, and we look forward to continuing to work with the FDA as we fight the pandemic and other deadly diseases,” said Pharmaceutical Research and Manufacturers of America President Steve Ubl.

Democrats have a razor-thin majority in the Senate. Manchin said on Friday he would oppose Califf’s nomination.

“Dr. Califf’s nomination and his significant ties to the pharmaceutical industry take us backwards not forward,” Manchin said in a statement on Friday.

White House Press Secretary Jen Psaki said the Biden administration was confident Califf would be confirmed, pointing to his experience and prior confirmation.

“We feel he’s a qualified person who has the exact experience for this moment,” Psaki said at a briefing, adding that Manchin had ultimately voted to confirm him in 2015.

The FDA has been without a permanent leader since Biden took office in January.

If confirmed by the Senate, Califf will take over from longtime FDA veteran Janet Woodcock, who has been serving as acting commissioner. The FDA oversees everything from medicine and medical devices to food, tobacco and cosmetics.

Woodcock has been in the role since Biden took office but legally could not serve past Monday unless a permanent nominee was named. Biden thanked her for her work over the past year.

The FDA has been in the spotlight as it reviews vaccines and potential treatments for COVID-19, and came under additional scrutiny for its accelerated approval this year of Biogen Inc’s Alzheimer’s drug, Aduhelm, against the recommendation of its outside expert advisers.

Califf is an internationally recognized expert in clinical trial research, health disparities, healthcare quality, and cardiovascular medicine, the White House said. He is a longtime faculty member at Duke University where he founded the Duke Clinical Research Institute, a large academic center that received over half its funding from the drug industry.

He joined the FDA in 2015 as deputy commissioner for Medical Products and Tobacco and worked closely with then-Vice President Biden on Cancer Moonshot, an initiative aimed at speeding development of cancer treatments.

(This story fixes typo in subhed.) 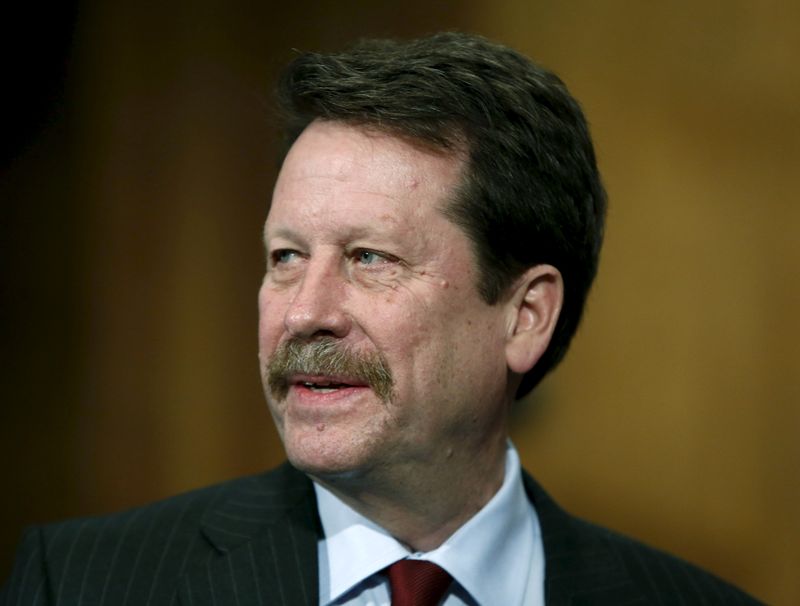