By Felix Hoske and Andrius Sytas

BIALYSTOK, Poland -The body of a young Syrian man has been found in Poland near the border with Belarus, Polish police said on Saturday, amid mounting international tension over a migrant crisis the European Union says has been orchestrated by Minsk.

Thousands of migrants from the Middle East are sheltering in freezing conditions on the border between Belarus and EU states Poland and Lithuania, which are refusing to let them cross.

At least eight of them have already died and fears are growing for the safety of others as harsh winter conditions set in.

“A forest worker informed the police about finding the body of a young man,” Podlaska police spokesman Tomasz Krupa told Reuters, adding that the body and the man’s passport had been found on Friday.

“It is a young man of Syrian nationality around 20-years old,” Krupa said. It was not possible to determine the cause of death at the scene, he added.

International tension is growing over the crisis, with neighbours of Belarus warning the situation could escalate into a military conflict https://www.reuters.com/world/europe/poland-reports-violent-clashes-overnight-migrants-attempt-new-border-breach-2021-11-11 and U.S. President Joe Biden expressing his concern https://www.reuters.com/world/europe/biden-says-us-concerned-about-situation-belarus-2021-11-12.

Belarus said on Saturday the number of migrants arriving at a makeshift camp on the border was growing daily, and that a group of up to 100 had crossed into Polish territory.

Polish Interior Minister Mariusz Kaminski estimated that about 1,500 people were camped at the border.


The European Union accuses Belarus of instigating the crisis in a bid to put pressure on the bloc over sanctions.

Some migrants have said Belarusian forces helped them cross the border, however.

On Saturday, the Polish army published footage that it said showed a group of about 50 migrants being escorted across the border by Belarusian forces.

The Polish Border Guard said Belarusian soldiers had pulled down a section of the temporary border fence.

In Lithuania, border guard officials released footage showing 70 migrants they said had been brought to the country’s border by Belarusian officials in trucks.

Poland, Austria, Lithuania, Latvia and Estonia have asked international aid agencies to organise humanitarian and medical assistance in Belarus to “avoid tragedies and prevent (a) humanitarian crisis” at the Polish border. 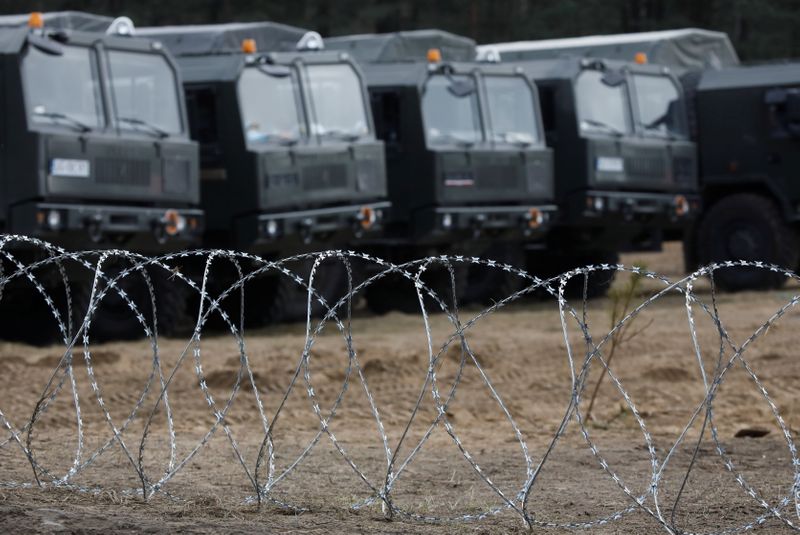