– Investors once believed that Qualcomm Inc’s fortunes rose and fell with Apple Inc’s iPhone, which uses a key “modem” chip from the San Diego company to connect to mobile data networks.

But as Qualcomm prepares for an investor presentation on Tuesday where it will outline plans to land its chips in everything from virtual reality headsets to self-driving cars to telecommunications gear, analysts said a looming loss of Apple, which is working on its own chips to replace Qualcomm’s, might not matter much to Qualcomm’s profits.

“Frankly, revenues are getting to the point where the worry over Apple possibly moving away is much smaller,” Bernstein analyst Stacy Ragson wrote in a note.

The change comes from a diversification strategy put in place years ago by Cristiano Amon, who ran the company’s chip division before becoming chief executive this year.

Earlier this month, Qualcomm said it expects adjusted earnings growth of more than 20% for fiscal 2022, where Wall Street had only been expecting growth of 12.5%, according to IBES data from Refinitiv. Shares of the company have risen almost 19% since Qualcomm gave its forecast.

“Anything beyond our contract with (Apple) is an upside to our model,” Amon said during an earnings call Nov. 3. “They have a large number of devices. And if there are opportunities, we’ll be very happy to engage with them on supply.”


Apple’s business likely won’t drop off all at once, analysts said. Evercore ISI analyst CJ Muse said “it’s a matter of when not if,” Apple leaves.

But Angelo Zino of CFRA Research said Apple likely will leave in phases, introducing internal chips only for one or two devices initially.

And in the meantime, Qualcomm has gained market share among Android phones because Qualcomm customers are filling the vacuum left from Huawei’s exit from the smartphone market. Brands such as China’s Honor are turning to the U.S. chip firm for supply. 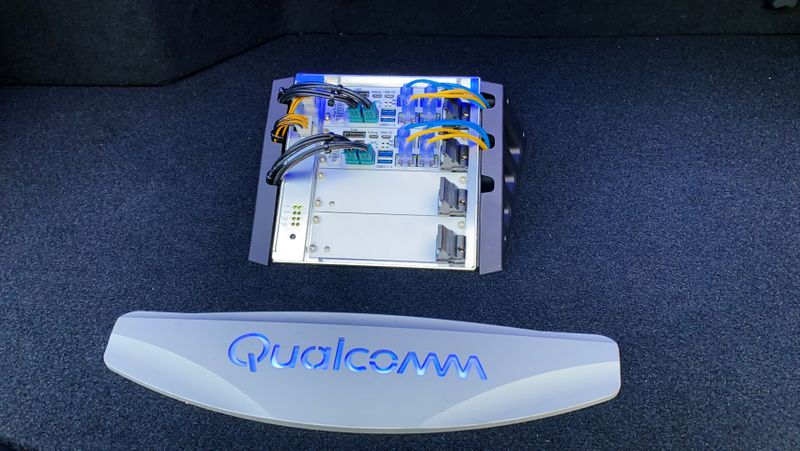