WASHINGTON (Reuters) – Former President Donald Trump’s longtime adviser Steve Bannon on Monday sought to portray the criminal charges over his defiance of a congressional inquiry into the deadly Jan. 6 Capitol riot as politically motivated, lashing out at President Joe Biden and others.

Bannon, indicted by a federal grand jury https://www.reuters.com/world/us/us-justice-department-indicts-bannon-not-complying-with-jan-6-subpoena-2021-11-12 on Friday on two counts of contempt of Congress, made his first court appearance, with Magistrate Judge Robin Meriweather releasing him on his personal recognizance after a brief hearing. Hours earlier, Bannon turned himself in at an FBI field office in Washington, flanked by black-clad bodyguards.

The conditions set by Meriweather for Bannon’s release did not include an order not to talk about the case publicly. Bannon moments after the hearing addressed a throng of journalists outside the federal courthouse.

“I’m never going to back down. They took on the wrong guy this time,” said Bannon, Trump’s one-time chief strategist and one of more than 30 people close to the Republican former president called to testify to the Democratic-led House of Representatives select committee probing the Jan. 6 attack.

“I’m telling you right now, this is going to be the misdemeanor from hell for Merrick Garland, Nancy Pelosi and Joe Biden,” Bannon said.

“We’re going to go on the offense. We’re tired of playing defense,” Bannon said, who claimed without offering evidence that Biden ordered Garland to bring the charges.

Bannon was indicted on one contempt count for refusing to appear for a deposition before the committee and a second count for refusing to produce documents. The House voted on Oct. 21 to hold Bannon in contempt https://www.reuters.com/world/us/us-house-edges-toward-contempt-charges-against-trump-aide-bannon-2021-10-21, leaving it up to the Justice Department, headed by Garland, to decide on bringing charges.

Before surrendering to the FBI, Bannon told reporters, “We’re taking down the Biden regime,” though he did not specify what he meant by “taking down.” A demonstrator standing behind him held a sign that read “Coup Plotter.”

A mob of Trump supporters stormed the Capitol on Jan. 6 in a failed attempt to prevent formal congressional certification of his election loss to Biden. The committee is scrutinizing Trump’s actions relating to those events. Bannon is the first to face criminal charges arising from the panel’s inquiry.

Contempt of Congress is a misdemeanor punishable by up to one year in jail along with a fine of up to $100,000, according to the Justice Department. The department on Friday had said Bannon faced a fine of up to $1,000.

Contempt of Congress is a misdemeanor punishable by up to one year in jail along with a monetary fine.

Meriweather imposed several conditions on Bannon including surrendering his U.S. passport. Bannon did not enter a plea, with an arraignment scheduled for Thursday.

Trump has sought to stonewall the House committee and directed his associates not to cooperate. In defying his subpoena, Bannon cited Trump’s insistence – already rejected by one judge – that the former president has a right to keep the requested material confidential under a legal doctrine called executive privilege https://www.reuters.com/world/us/can-trump-use-executive-privilege-block-jan-6-attack-probe-2021-09-09.

Bannon, a prominent figure in right-wing media circles, was an architect of Trump’s 2016 presidential victory and served as White House chief strategist in 2017. The former Goldman Sachs Group Inc banker and Navy veteran has promoted right-wing causes and candidates in the United States and abroad.

Bannon separately was charged last year https://www.reuters.com/article/us-usa-trump-bannon/steve-bannon-key-to-trumps-rise-charged-with-defrauding-border-wall-supporters-idUSKBN25G1J4 with defrauding donors to a private fund-raising effort to boost Trump’s pledge to build a wall on the U.S.-Mexican border. Trump pardoned Bannon before the case could go to trial.

The House committee has said Bannon made public statements suggesting he knew in advance about “extreme events” that would occur on Jan. 6. Bannon said on a Jan. 5 podcast that “all hell is going to break loose tomorrow.”

Shortly before the riot, Trump gave a speech to supporters near the White House repeating his false claims that the election was stolen from him through widespread voting fraud and urging them to go to the Capitol and “fight like hell” to “stop the steal.”

House investigators hope the Bannon charges will motivate other witnesses including former White House Chief of Staff Mark Meadows, who on Friday refused to appear for a deposition, to testify.

Bannon’s attorney David Schoen after Monday’s hearing emphasized that his client’s actions toward his subpoena were guided by Trump’s invocation of executive privilege.

“You can’t put the genie back in the bottle,” Schoen said. “Mr. Bannon acted as his lawyers counseled him to do by not appearing and by not turning over documents in this case.”

(Reporting by Sarah N. Lynch and Jan Wolfe; Additional reporting by Mark Hosenball and Matt Spetalnick; Editing by Will Dunham and Scott Malone) 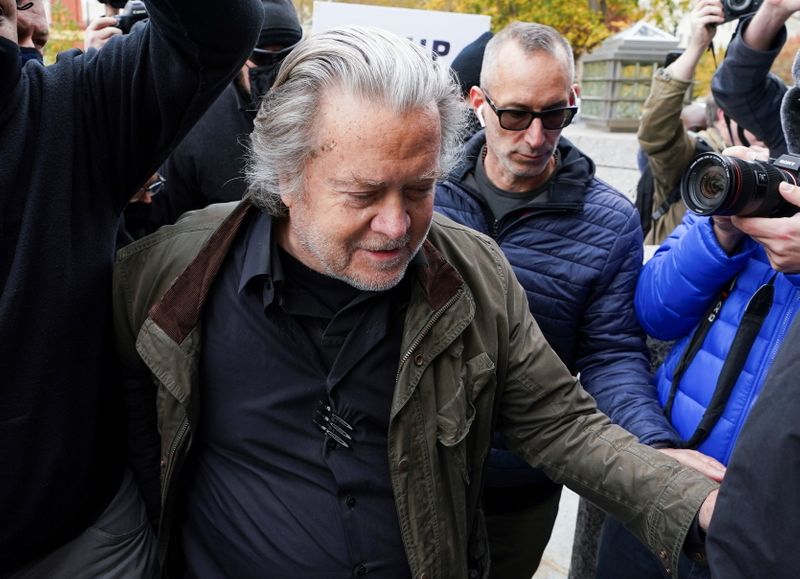 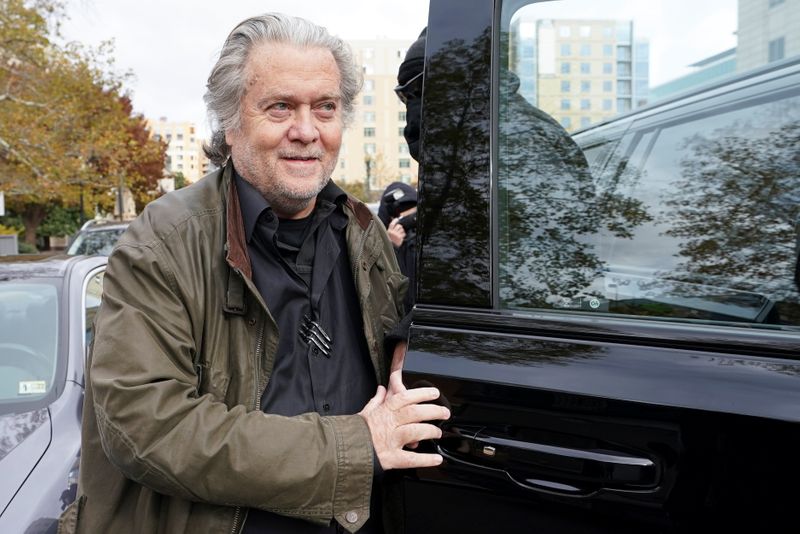 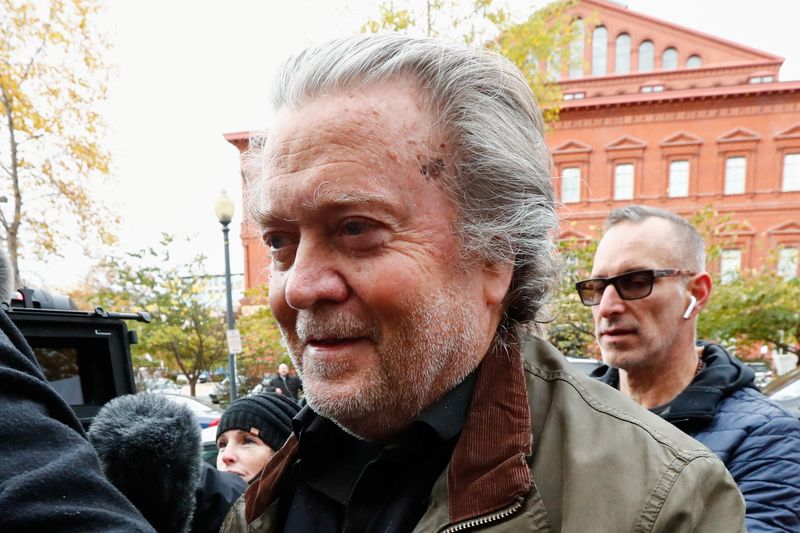 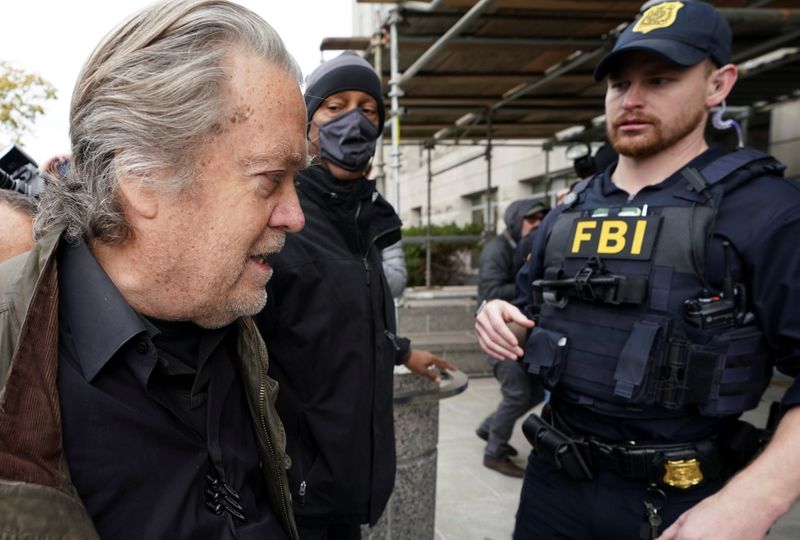 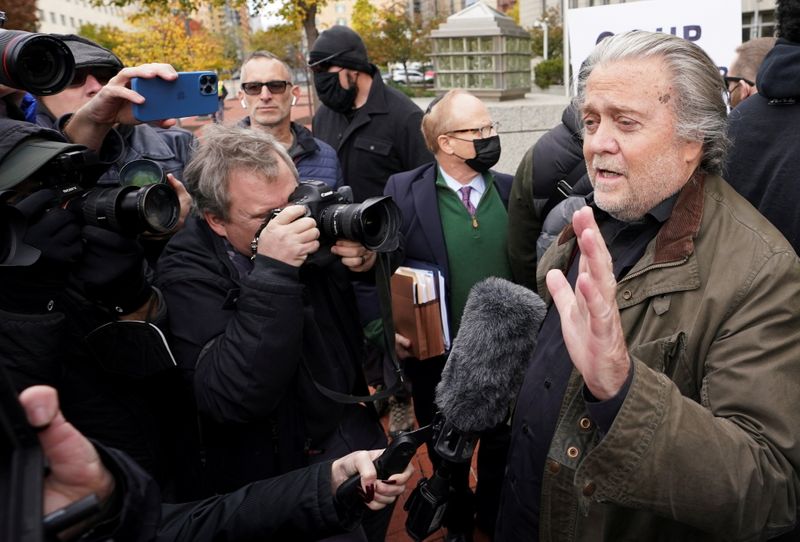