NEW YORK -The dollar rose to a 16-month high on Tuesday after data showed U.S. consumers looked past rising prices and drove retail sales higher than expected last month, while the euro slumped amid growth concerns and a surge in COVID-19 cases in Europe.

U.S. retail sales rose 1.7% in October, topping consensus expectations of a 1.4% rise, likely as Americans started their holiday shopping early to avoid empty shelves amid shortages of some goods as the ongoing pandemic squeezes supply chains.

The dollar has rallied since U.S. inflation data last week showed consumer prices surged to their highest rate since 1990, fueling speculation that the Federal Reserve may raise interest rates sooner than expected.

“If you look at U.S. markets, there’s a lot more speculation, at least within implied market pricing, that they will be hiking on more than one occasion next year,” said Mazen Issa, senior FX strategist at TD Securities. “After last week’s U.S. CPI report, the dam just broke and the dollar and the FX complex is certainly tagging along for the ride.”

“Today’s retail sales report only adds fuel to the fire,” he said.

European Central Bank President Christine Lagarde on Monday said that tightening monetary policy now to rein in inflation could choke off the euro zone’s recovery, comments which were viewed as pushing back on calls and market bets for tighter policy.


The euro’s decline reflects the disappointing performance of the euro zone economy relative to the United States, which has been surprising on the upside more than the euro zone has been, said Marshall Gittler, head of investment research at BDSwiss Holding Ltd.

COVID-19 is also surging again in Europe, which causing some countries to contemplate lockdowns again, whereas the spread of the virus seems to have stabilized for now in the United States, he said.

“As a result, the market is getting increasingly nervous about the euro,” Gittler said.

On Monday, Austria imposed a lockdown on unvaccinated people, while Germany’s parliament is due to vote on Thursday on stricter measures to deal with surging cases. France, the Netherlands and many countries in Eastern Europe are also experiencing a surge in infections.

“The fear that the situation could escalate and result in a more significant tightening of restrictions in the coming months is hurting sentiment towards European currencies,” MUFG currency analyst Lee Hardman said in a client note.

The British pound was up 0.1% against the dollar at $1.3429, spurred by data that showed British employers hired more people in October after the government’s job-protecting furlough scheme ended.

Elsewhere, the cryptocurrency bitcoin dipped back below $60,000, for the first time since Nov. 1. 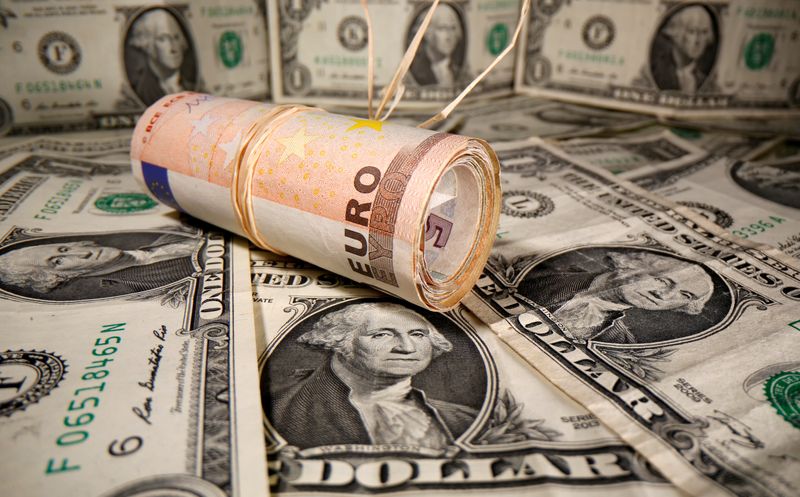