By Jonathan Allen and Rich McKay

– The prosecution rested its case on Tuesday against the three white men charged with murdering Ahmaud Arbery after presenting evidence it said showed the defendants wrongly assumed the worst about a Black man jogging in a mostly white southern Georgia neighborhood.

Over eight days, prosecutors from the Cobb County district attorney’s office repeatedly played a cellphone video made by one of the defendants, which shows another defendant, Travis McMichael, firing a shotgun three times at Arbery, 25, at close range.

McMichael, 35, and his 65-year-old father, Gregory McMichael, told investigators they grabbed their guns and jumped in their pickup truck after Arbery ran past their driveway on the afternoon of Feb. 23, 2020, believing he could be the same Black man seen walking around a nearby construction site.

Bryan, 52, got in his own pickup truck after the chase passed by his driveway. He later told investigators he tried to use the truck to block Arbery’s path down a road in Satilla Shores, a leafy residential area outside the small coastal city of Brunswick, before videoing Arbery’s final moments.

Defense lawyers, who are due to present their own cases to the jury in the coming days, are arguing that the chasing of Arbery was justified under Georgia’s 19th-century citizen’s arrest law that was repealed after an outcry over the killing.

At the end of the chase Arbery ran toward the younger McMichael, reaching toward the gun, and defense lawyers say McMichael fired in self-defense.

Prosecutors sought to rebut arguments that the defendants were attempting a valid citizen’s arrest, which required that someone have “reasonable and probable” suspicion that a person is fleeing a serious crime they committed.

They showed the jury multiple security-camera videos of Arbery walking around a half-built house on an unoccupied, unfenced property near the McMichaels’ house.


They also showed police body-worn camera video of a police officer telling the McMichaels that no one knew who the young Black man walking around the property was, but that nothing was ever taken on the days he was seen there.

And they had the defendants’ own words to investigators read aloud in court, in which they said they did not see Arbery before he ran past their driveways and did not know what he had been doing before.

McMichael also said he shouted out a graphic threat mid-chase that he would shoot Arbery’s head off if he did not stop.

The trial began on Oct. 18 in Glynn County Superior Court with nearly three weeks of jury selection, resulting in a jury that prosecutors complained was disproportionately white.

Defense lawyers struck all but one Black person from the jury panel, drawn from a county where about a quarter of residents are Black, but told the court the strikes were for reasons that had nothing to do with race.

Prosecutors called more than a dozen witnesses, most of them county police or state investigators, several of whom read aloud from transcripts of their interviews with the defendants.

“He was trapped like a rat,” the elder McMichael told a Glynn County detective a few hours after the deadly pursuit of Arbery. “I think he was wanting to flee and he realized that, you know, he was not going to get away.”

(Reporting by Jonathan Allen in New York and Rich McKay in Atlanta; editing by Ross Colvin and Jonathan Oatis) 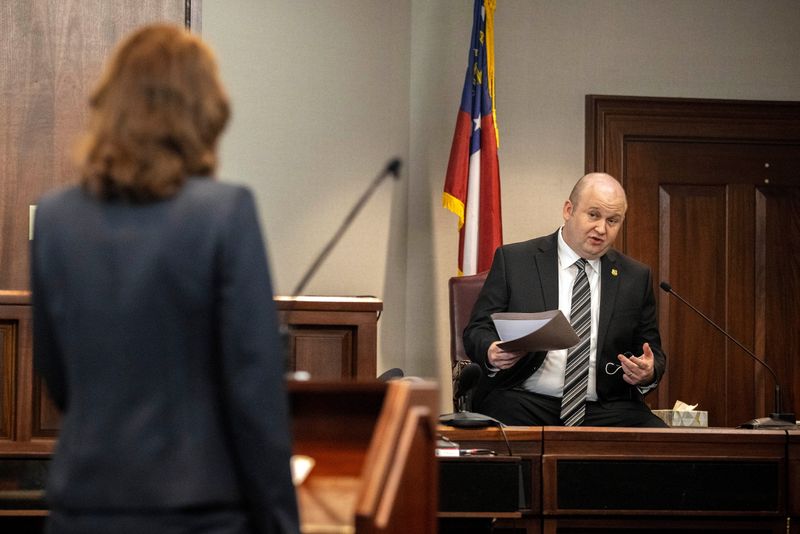