WASHINGTON – U.S. single-family homebuilding tumbled in October while the number of houses authorized for construction but not yet started jumped to a 15-year high, underscoring the disruption to the housing market from an ongoing shortage of materials and labor.

Though the report from the Commerce Department on Wednesday showed an increase in permits for future homebuilding, the rise was concentrated in the volatile multi-family housing segment. This will do little to alleviate an acute shortage of houses on the market, which has led to record annual gains in home prices.

Single-family housing starts, which account for the largest share of the housing market, dropped 3.9% to a seasonally adjusted annual rate of 1.039 million units last month. The fourth-straight monthly decline pushed starts to the lowest level since August 2020. Homebuilding fell in all four regions, with large decreases in the Northeast, Midwest and West.

The densely populated South, where the bulk of homebuilding occurs, reported a 1.8% drop in single-family starts.

Homebuilding has essentially been treading water this year as builders battle shortages and higher prices of raw materials. A survey from the National Association of Home Builders on Tuesday showed confidence among single-family homebuilders rose for the third straight month in November, but noted that “supply-side challenges, including building material bottlenecks and lot and labor shortages, remain stubbornly persistent.”

Lumber, which is used for framing, remains expensive and prices for copper, another essential material in homebuilding, are high. In addition, there were about 333,000 job openings in the construction industry as of the end of September. Some household appliances are in short supply.

The materials squeeze could ease during winter, a typically slow season for homebuilding in the Northeast and Midwest. Slowing demand for houses because of reduced affordability could also help to lessen the pressure on supply.

Residential investment contracted for a second consecutive quarter in the third quarter. It is likely to remain subdued in the final three months of the year.

“Supply-chain bottlenecks will likely limit construction activity in the short term, but the supply picture should look better in 2022,” said Abbey Omodunbi, a senior economist at PNC Financial in Pittsburgh, Pennsylvania. “Declining affordability and rising mortgage rates will soften demand in the next year.”

Stocks on Wall Street were trading lower. The dollar dipped against a basket of currencies. U.S. Treasury prices were higher.

Starts for buildings with five units or more increased 6.8% to a rate of 470,000 units last month. Workers returning to offices and schools reopening for in-person learning, thanks to COVID-19 vaccinations, are fueling demand for rental apartments.

With single-family homebuilding declining, overall housing starts slipped 0.7% to a rate of 1.520 million units in October.


Economists polled by Reuters had forecast starts rebounding to a rate of 1.576 million units.

Starts have declined from the 1.725 million unit-pace scaled in March, which was a more than 14-1/2-year high.

Still, homebuilding remains underpinned by a severe shortage of previously owned homes on the market, which has resulted in double-digit house price growth.

Permits for buildings with five units or more surged 6.5% to a rate of 528,000 units. Housing completions were unchanged at a rate of 1.242 million units. Single-family home completions dropped 1.7% to rate of 929,000 units.

Over time the housing backlogs and more inventory could help to bring more homes on to the market and cool the house price inflation, which has sidelined some first-time buyers. A lot will, however, hinge on the supply of building materials and other inputs as well as labor.

“The recent slowdown in project completions has limited home sales in new communities,” said Mark Vitner, a senior economist at Wells Fargo in Charlotte, North Carolina. “That said, the growing backlog of projects should keep builders busy for the next couple of years.” 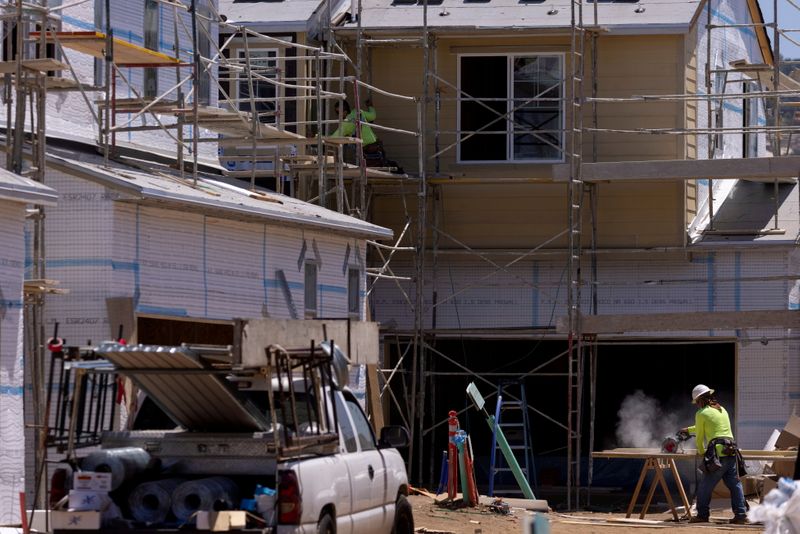