(Reuters) -European shares fell more than 1% on Thursday, as countries ramped up restrictions to curb the spread of the Omicron coronavirus variant, raising worries about hits to a nascent economic recovery.

The continent-wide STOXX 600 closed down 1.2%, giving back more than half of the previous day’s gains when a recovery in the pandemic-exposed sectors triggered the STOXX 600’s best session in almost six months.

Germany agreed on new COVID-19 restrictions on Thursday that focussed on the unvaccinated, and the United States tightened travel restrictions, while U.S. Treasury Secretary Janet Yellen said the Omicron variant showed the pandemic could be around for “some time.”


Travel and leisure shares, which suffer the most from movement curbs, fell 2.6%, bringing losses this year to 7%, significantly underperforming other major sectors which are on course to gain in double digits.

Europe’s equity benchmark has seen sharp fluctuations in recent days on uncertainties about how contagious and severe the new variant is, and the effectiveness of current vaccines in tackling it.


“We’re going to stay in this pattern of up one day and down the next as long as the Omicron story remains an unknown,” said David Madden, market analyst at Equiti Capital.

“We won’t be re-testing Europe’s November highs until we’re certain about the variant’s knock-on effects, and until we know for sure whether we’re going down the road of lockdowns.”

The STOXX 600 is now about 5% away from record highs hit mid-November.

Tech stocks were the biggest decliners in Europe, with semiconductor companies Infineon Technologies, AMS and ASML down between 4.4% and 5.7% on a report that Apple Inc warned of slowing demand for its iPhone 13.

Luxury goods firms Hermes and Richemont fell 3.1% and 2.1%, respectively, despite their inclusion in the blue-chip Euro STOXX 50 index.

“We expect buybacks (in Europe) to catch up in 2022, rising 30%. Consumer, luxury and mining stocks should be prominent buyers of their own shares,” Citigroup analysts said in a note.


Vifor Pharma surged 21.0% to the top of Swiss mid-cap index after media reports that Australian biotech firm CSL is in talks to buy the drugmaker.

(Reporting by Anisha Sircar in Bengaluru; Editing by Shinjini Ganguli and Richard Chang) 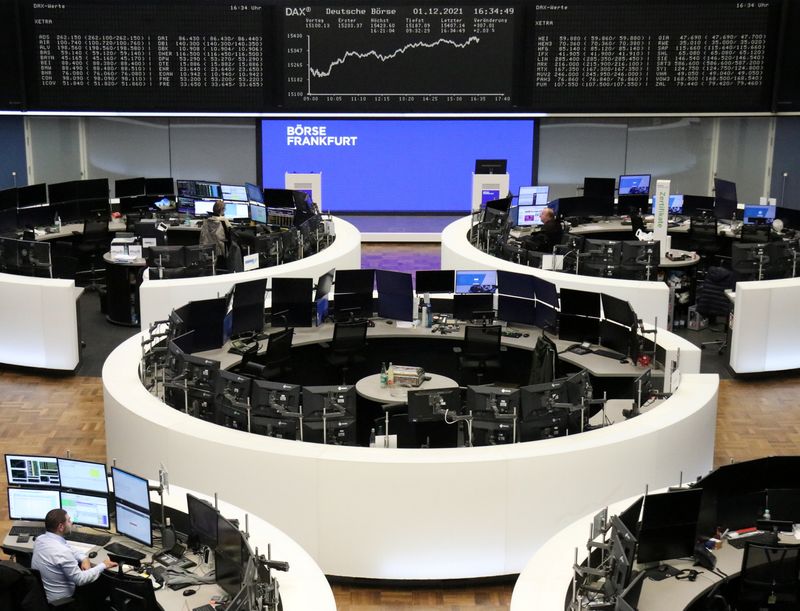