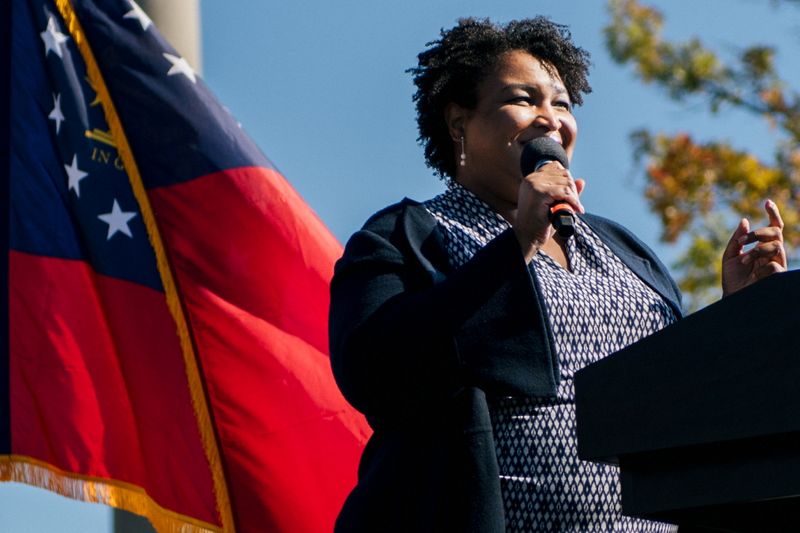 By Alexandra Ulmer and Joseph Ax

(Reuters) – Voting rights activist Stacey Abrams said on Wednesday that she is running again for governor of Georgia, setting up a potential rematch against Republican Governor Brian Kemp in a state that has become a key battleground in U.S. elections.

“Opportunity and success in Georgia shouldn’t be determined by your ZIP code, background or access to power,” Abrams, a Democrat, said in a video https://twitter.com/staceyabrams/status/1466140248887418885?s=20 launching her campaign. “If our Georgia is going to move to its next and greatest chapter, we’re going to need leadership.”

Abrams, 47, a former member of the Georgia House of Representatives, lawyer, entrepreneur and romance novelist, became a national Democratic figurehead after losing a hard-fought governor’s race to Kemp in 2018 by just 55,000 votes.

Since that defeat, which many Democrats blamed on voter suppression, Abrams has built a national reputation as a voting rights advocate, founding the organization Fair Fight. She was credited by many Democrats with boosting the party’s turnout in 2020, when President Joe Biden became the first Democrat to carry the state in a presidential election in nearly three decades.


Two months after Biden’s victory, Democrats swept two Senate races in Georgia to give them control of the U.S. Senate. A matchup between Abrams and Kemp next year would offer a test of whether those wins reflect a more permanent Democratic edge in a diversifying and growing Southern state or whether they were driven by antipathy toward Republican former President Donald Trump.

Georgia hasn’t had a Democratic governor since Roy Barnes left office in 2003. If she wins next November, Abrams, whom Biden at one point considered as a potential running mate, would be the first Black woman elected governor of a U.S. state.

Kemp, who is running for re-election, reacted on Wednesday by saying that Abrams would have shut down the state over COVID-19 and allowed “woke politics” to be part of school lessons.

“I’m in the fight against Stacey Abrams, the failed Biden agenda, and their woke allies to keep Georgia the best place to live, work, and raise a family,” Kemp said on Twitter.

Kemp could face a difficult primary battle within his own party after resisting Trump’s requests that he convince the Georgia state legislature to overturn the 2020 presidential results showing Biden had beaten Trump.

Kemp has since signed into law sweeping voting restrictions sponsored by Republicans, with potentially big implications for how elections are administered in Georgia in 2022 and the U.S. presidential contest in 2024.

Proponents say the legislation is needed to safeguard elections and restore voters’ faith in the process. Opponents say it was born out of the Republican Party’s “Big Lie,” the false claim that Biden’s defeat of Trump in November 2020 was the result of widespread fraud.

In an interview released earlier on Wednesday at the Reuters Next conference, Abrams said she remains optimistic that Congress will pass federal legislation to advance and protect voting rights, despite Republican opposition.

Georgia is set to vote in congressional and gubernatorial general elections next November. Raphael Warnock, a Baptist preacher from Martin Luther King Jr.’s former church who was elected to the Senate in January in a special election, is also up for re-election for a six year-term.

More in US and World News