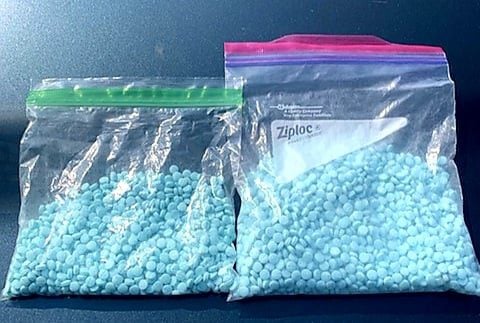 The indictments allege that multiple members of this drug trafficking ring were already-convicted felons who illegally possessed and used firearms and ammunition. As an example, Smith, as charged in the indictment, directed codefendant Dominique Baquet, 28, of Indianapolis, to rob another codefendant at gunpoint for drug proceeds.


During the course of this investigation, investigators seized over 46 pounds of methamphetamine, over 700 grams of fentanyl, 30 firearms, over $300,000 in U.S. currency, six vehicles, and a pill press.

“Methamphetamine and fentanyl are a source of some of the violence and social devastation that are plaguing our communities,” said U.S. Attorney Zachary A. Myers. “Federal law enforcement, along with our state and local law enforcement partners, are committed to eliminating the organizations that are supplying these illegal drugs and holding those individuals accountable.”


“This drug trafficking organization is charged with making a living peddling poison, including potentially deadly fentanyl, into our communities,” said Michael Gannon, Assistant Special Agent in Charge of DEA Indianapolis District Office. “They were responsible for distributing multi-pound quantities of methamphetamine and fentanyl in various cities throughout Indiana and western Kentucky, including Indianapolis, Evansville, Princeton, and Owensboro. This case reflects our commitment to improving public safety for the fine citizens of Indiana and Kentucky.”

The following individuals have been charged and arrested:

A federal district court judge will determine any sentence after considering the U.S. Sentencing Guidelines and other statutory factors.


An indictment is merely an allegation and all defendants are presumed innocent until proven guilty beyond a reasonable doubt in a court of law.

Our commitment to reducing gun crime in Indiana and nationwide.