By Matthias Williams and Natalia Zinets

KYIV – U.S. President Joe Biden assured Ukrainian President Volodymyr Zelenskiy that Kyiv’s bid to join the NATO military alliance was in its own hands, Zelenskiy’s chief of staff said after the two leaders spoke on Thursday.

Biden and Zelenskiy had a call two days after Biden held talks with Russian President Vladimir Putin to try to defuse a crisis over Russian troop movements near Ukraine’s borders.

Ukraine accuses Russia of massing tens of thousands of troops in preparation for a possible large scale military offensive, raising fears that a simmering conflict in Ukraine’s eastern Donbass region could erupt into open war between the neighbours.

Russia denies planning any attack but accuses Ukraine and the United States of destabilising behaviour, and has sought security guarantees against NATO’s eastward expansion.

Ukraine rejects any such guarantees as illegitimate and has sought reassurances that no deals about its future would be decided without its involvement.

“President Biden said very clearly that the decision on Ukraine’s accession to NATO is the decision of the Ukrainian people only, this is a sovereign and independent Ukrainian state,” he said. “And it depends on Ukraine and NATO members.”

In a call which Zelenskiy said lasted 1-1/2 hours, Ukraine’s president also told Biden that he had “clear proposals to unblock the peace process” in eastern Ukraine and was ready to discuss them in various formats.


The White House earlier had said Biden planned to convey support for Ukraine’s sovereignty and territorial integrity during the call.

Zelenskiy and Biden spoke as Russia kept up a barrage of hostile rhetoric towards Ukraine, accusing Kyiv of moving heavy artillery towards the frontline of fighting in the east and failing to engage in the peace process.

Ukraine’s ties with Russia collapsed in 2014 after Russia’s annexation of Crimea and Moscow-backed forces seized territory in eastern Ukraine that Kyiv wants back. Kyiv says some 14,000 people have been killed in fighting since then.

Foreign Minister Dmytro Kuleba welcomed the Putin-Biden call as a step towards deterring Moscow from launching a new attack but urged allies to draw up a tough package of measures to warn Russia off any further military escalation. 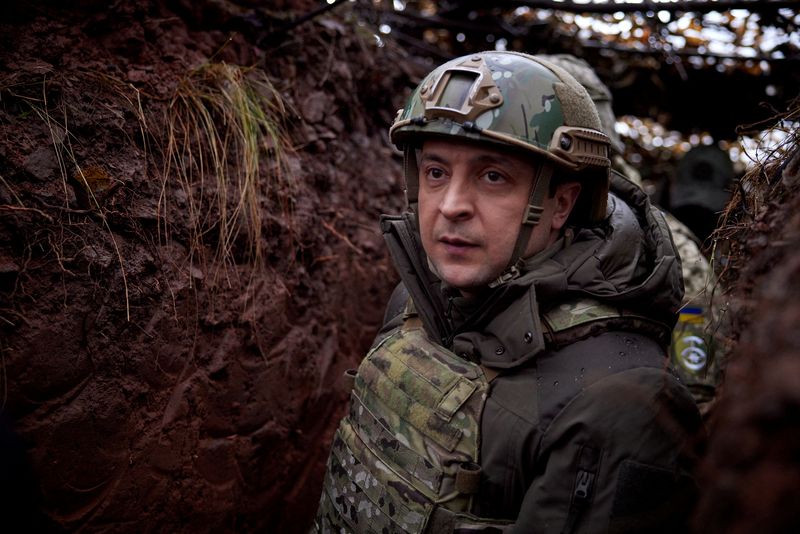