WASHINGTON – U.S. President Joe Biden urged Americans to get vaccinated against COVID-19, vowed to combat inflation and joked about his lack of cooking skills during his first late-night TV appearance on NBC’s “Tonight Show” on Friday.

Biden, 79, told host Jimmy Fallon that he and first lady Jill Biden had convinced the White House staff to let them make their own breakfast at 1600 Pennsylvania Avenue.

“We come from middle-class backgrounds … We’re not used to people waiting on us,” he said. “We can make our own eggs or pour a bowl of …”

“You make your own eggs?” Fallon interrupted Biden.

“Well, I don’t. Jill does,” the president chuckled, adding that when she was young, his daughter once told an interviewer: “My daddy can’t do much. He can boil water and make ‘pasghetti’.”

It was a rare interview for Biden, who has faced criticism for failing to meet with reporters for more regular news conferences or interviews.

Biden has held just six solo and three joint news conferences since taking office, compared to 35 solo news conferences and one joint event held by former President Donald Trump in his final year in office, according to the American Presidency Project https://www.presidency.ucsb.edu/statistics/data/presidential-news-conferences at the University of California, Santa Barbara.

Asked how seriously he took approval ratings after watching his own drop steadily over the past year, Biden quipped: “Well, not anymore.”

He said it was his job to address Americans’ anxiety about the pandemic and inflation. “No one should feel sorry for me,” he said.

Biden said he hoped both COVID and inflation would be “under control” by this time next year, and urged millions of Americans who have not gotten vaccinated to do their part to curb the spread of the pandemic.

“The bottom line is, the way to avoid this virus is to get two shots and then get the booster shot,” he said. “It will make a gigantic difference … it’s patriotic to get it done.”

Biden said it would be tough to win congressional passage of his $1.75 trillion social and climate spending bill with no Republican support and even some Democrats not fully on board. He said he still hoped it could pass this year and vowed to “keep at it” until it passed. 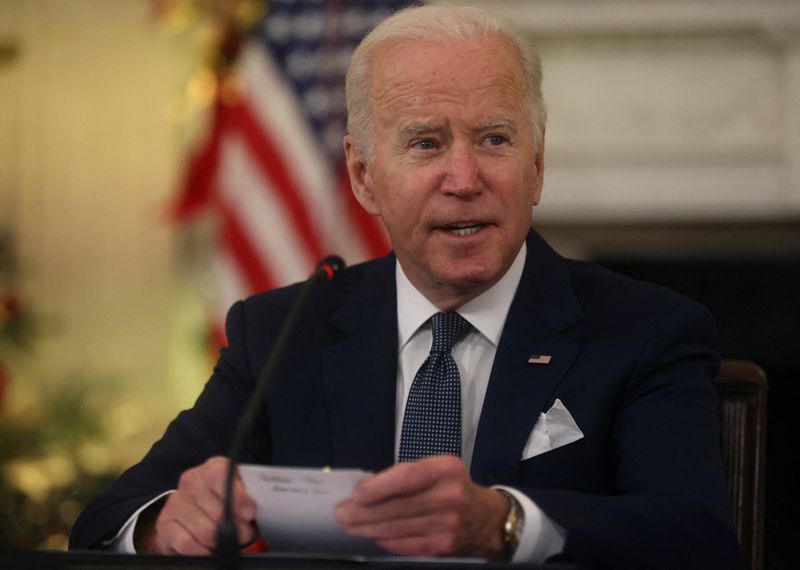