BRUSSELS – The EU’s Justice Commissioner received “brutal” treatment last month in Warsaw, a member of his delegation said, during talks aimed at defusing a dispute over the independence of Poland’s judiciary that is blocking billions of euros in economic aid.

Poland’s combative stance at the meeting dashed hopes for an entente that might help unlock 36 billion euros in post-pandemic recovery stimulus to Warsaw, sources told Reuters.

“After the visit, the team was a bit down. It’s a difficult situation,” the delegation member told Reuters. “It’s a bit depressing.”

A source close to Ziobro said Reynders was “evidently shocked” at Warsaw’s position.

“Positions have not come closer,” said the person, adding that any hope in Brussels that Poland would give way at the meeting proved wrong.

The bloc accuses Poland’s ruling Law and Justice party (PiS) of political meddling in the judicial system in violation of EU law and says it must scrap a disciplinary system for judges that the European Court of Justice (ECJ) has already struck down.

Warsaw says its shake-up of the judiciary is needed to increase efficiency and rid it of communist-era vestiges.


That row is part of a much wider clash over democratic standards that also includes women’s rights and media freedoms.

Despite these disputes, PiS retains solid backing in Poland where it has boosted welfare spending since coming to power in 2015. Its nationalist, eurosceptic rhetoric goes down well with working and lower middle class Poles outside the big cities.

It remains unclear when and how Warsaw might change its Disciplinary Chamber at Poland’s Supreme Court in a way that would satisfy the executive European Commission in Brussels and allow for disbursement of the COVID recovery funds.

“The strongest argument the EU has (in the disputes) is the massive pile of money (Commission President Ursula) von der Leyen is sitting on and won’t release until this moves,” said the delegation member.

Asked for comment on the situation, the Polish government’s information office did not address the disciplinary chamber issue but said Warsaw’s talks with the Commission were bringing closer a compromise that would allow the disbursement of money.

Reynders said after his Warsaw visit that he had received no answer to his queries about how Poland planned to comply with the ECJ ruling against the disciplinary chamber. The Commission said talks with Warsaw were continuing.

Since Reynders’ visit, two other events have further eroded prospects for a swift resolution of the standoff.

Firstly, Germany, Europe’s most powerful country, has a new ruling coalition that has signalled a harder line over democratic backsliding in the EU than former centre-right chancellor Angela Merkel.


A first test of that new line will come on Sunday when Merkel’s Social Democrat successor, Olaf Scholz, visits Warsaw.

Secondly, a legal opinion issued by an advocate-general at the ECJ has all but scuppered efforts by Poland and Hungary to block a new tool aimed at cutting cash for states that violate the EU’s democratic rules.

As well as the COVID recovery funds, Poland also risks losing money earmarked for it under the EU’s 2021-27 shared 1.1 trillion euro budget.

For now, a senior member of the EU’s executive said last week that Poland would not receive the grants and cheap loans now rolling into most other EU countries to help them recover from the pandemic, unless it changed tack.

“It is unlikely that we can finalise this work (on approving Poland’s national recovery plan and disbursing the funds) this year,” EU Commission Vice President Valdis Dombrovskis said. 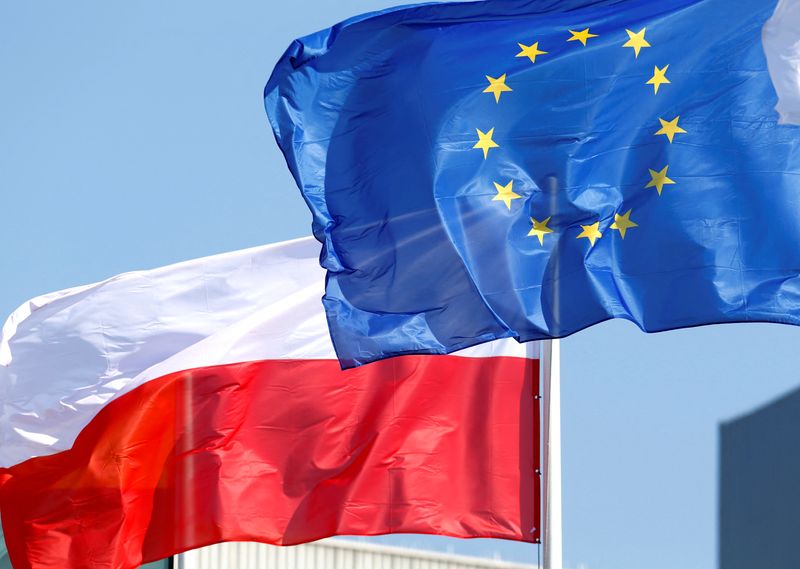