By Lawrence Hurley and Ludwig Burger

WASHINGTON -The U.S. Supreme Court on Monday asked President Joe Biden’s administration for its views on whether the justices should hear Bayer AG’s bid to dismiss claims by customers who contend its Roundup weedkiller causes cancer, as the company seeks to avoid potentially billions of dollars in damages.

Bayer in August filed a petition https://www.reuters.com/business/healthcare-pharmaceuticals/bayer-takes-legal-battle-over-glyphosate-cancer-claims-us-supreme-court-2021-08-16 with the Supreme Court to reverse a lower court decision that upheld $25 million in damages awarded to California resident Edwin Hardeman, a Roundup user who blamed his cancer on the German pharmaceutical and chemical giant’s glyphosate-based weedkillers.

The Supreme Court’s decision on whether to take up the matter is being closely watched as Bayer maneuvers to limit its legal liability in thousands of cases. U.S. Solicitor General Elizabeth Prelogar in the coming months is due to file a brief expressing the administration’s views.

Bayer said in a statement that it is encouraged by the court’s announcement, which often indicates the justices are interested in hearing a case.

The U.S. government “has consistently found that glyphosate-based herbicides can be used safely and are not carcinogenic, and has stated that a cancer warning would be false and misleading and misbrand the product,” Bayer’s statement said.

Bayer has lost three appeals https://www.reuters.com/business/healthcare-pharmaceuticals/bayer-loses-third-appeals-case-over-glyphosate-weedkiller-2021-08-10 against verdicts that sided with users of Roundup, awarding them tens of millions of dollars each. Bayer has pinned hopes for relief on the conservative-majority Supreme Court, which has a reputation for being pro-business.

Bayer asked the Supreme Court to review the verdict in Hardeman’s case, which was upheld https://www.reuters.com/business/healthcare-pharmaceuticals/us-appeals-court-upholds-verdict-that-bayers-roundup-caused-cancer-2021-05-14 by the San Francisco-based 9th U.S. Circuit Court of Appeals in May. Hardeman had regularly used Roundup for 26 years at his home in northern California before being diagnosed with a form of non-Hodgkin’s lymphoma.

There are more than 25,000 related claims that Bayer has not settled yet.

Bayer, which also makes aspirin, Yasmin birth-control pills and the stroke prevention drug Xarelto among other products, has argued that the cancer claims over Roundup and its active ingredient glyphosate go against sound science and product clearance from the U.S. Environmental Protection Agency. The EPA has upheld guidance that glyphosate is not carcinogenic and not a risk to public health when used as indicated on the label.

Bayer has said it should not be penalized for marketing a product deemed safe by the EPA and on which the agency would not allow a cancer warning to be printed.

The lawsuits against Bayer have said the company should have warned customers of the alleged cancer risk. Bayer wants the Supreme Court to find that the EPA label approval under a federal law called the Federal Insecticide, Fungicide and Rodenticide Act preempts the “failure to warn” claims brought under state law.

Roundup-related lawsuits have dogged Bayer since it acquired the brand as part of its $63 billion purchase of agricultural seeds and pesticides maker Monsanto in 2018.

Bayer struck a settlement deal in principle with plaintiffs in June 2020 but failed to win court approval for a separate agreement on how to handle future cases.

In July, Bayer took an additional litigation provision of $4.5 billion in case of an unfavorable ruling by the Supreme Court or in case the justices declined to consider its petition. This leaves “significant upside” if the Supreme Court rules in its favor, according to Bayer.

The provision came on top of $11.6 billion it previously set aside for settlements and litigation over the matter.

Bayer plans to replace glyphosate in weedkillers for the U.S. residential market for non-professional gardeners with other active ingredients. It will continue to sell the herbicide to farmers, who rely on it heavily and whose role in the litigation has been described as negligible by Bayer.

As of late October, Bayer had reached settlements in about 98,000 cases out of about 125,000 cases overall.

A California jury last week found that Roundup did not cause https://www.reuters.com/business/healthcare-pharmaceuticals/bayer-wins-second-straight-verdict-roundup-cancer-case-2021-12-09 a woman’s non-Hodgkin’s lymphoma.

(Reporting by Lawrence Hurley and Ludwig Burger; Additional reporting by Tom Hals; Editing by Will Dunham) 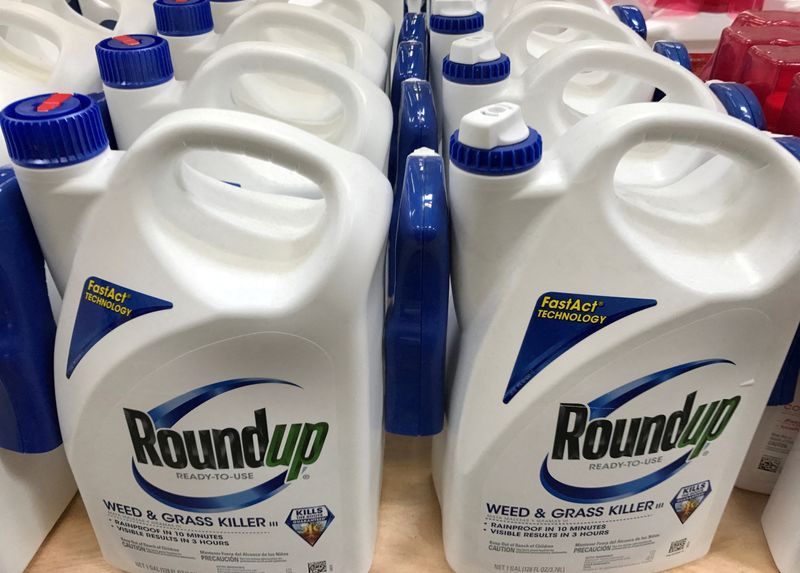