JAKARTA -U.S. Secretary of State Antony Blinken made a plea on Tuesday to the U.S. Senate to speed up the confirmations of President Joe Biden’s nominees to the post of ambassador, saying delays hampered efforts to tackle foreign policy challenges.

Biden has pledged to restore U.S. leadership in the world through diplomacy, after four years of a unilateral approach espoused by his predecessor Donald Trump, and having Senate-confirmed nominees is crucial in achieving that goal.

“This is a huge problem,” Blinken told a news conference in Jakarta, the first stop on a Southeast Asia trip that will cover Malaysia and Thailand. “For the sake of our national security, the Senate must act,” he said.

Nominees do not become ambassadors until they are confirmed by the U.S. Senate.

By last week, just 16% of the Biden administration’s ambassadors were confirmed, Blinken said, compared with the level of 70% to 90% by the same point in the three previous administrations.

“Virtually every challenge we face, including dealing with Russia, with China, with non-state factors, we’re hampered by the fact that we don’t have our full national security and foreign policy team on the field.”

He added that he had spoken about the problem with Senate Majority Leader Chuck Schumer on Monday night.

Republican Senator Ted Cruz has put a hold on Biden’s nominees as he wants the president to impose sanctions that would halt Russia’s Nord Stream 2 gas pipeline.

Cruz has wielded power by being a lone holdout on a fast-track confirmation process that requires consent by all 100 senators for non-controversial nominees.

In November, Republican Senator Marco Rubio put a hold on Nicholas Burns, Biden’s nominee to be U.S. ambassador to Beijing. 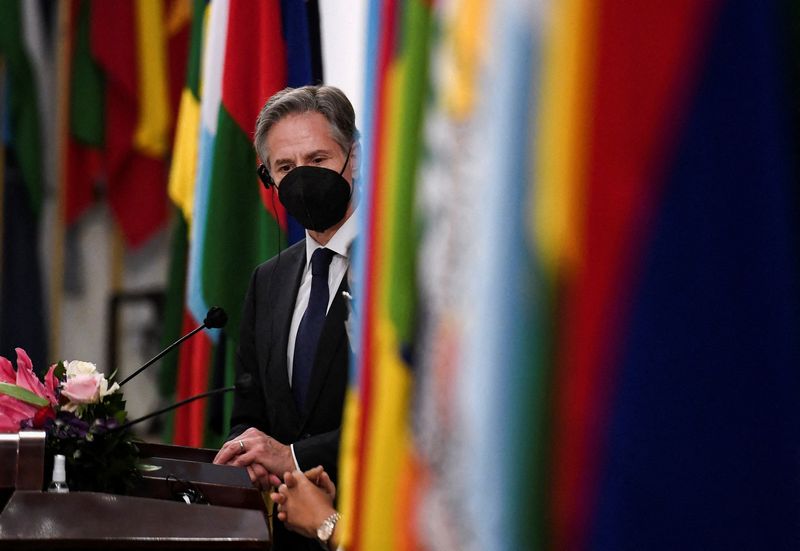