WASHINGTON – U.S. retail sales increased less than expected in November, likely payback after surging in the prior month as Americans started their holiday shopping early to avoid empty shelves.

A rotation in spending from goods back to services also appears to have held back retail sales last month, with the report from the Commerce Department on Wednesday showing a sharp drop in receipts at electronics and appliance stores. Online retail sales were unchanged. Higher food and gasoline prices are probably curtailing discretionary spending.

The modest retail sales gain did not change views that the economy was regaining steam after a slowdown in the third quarter that was triggered by the COVID-19 Delta variant and rampant shortages. In a nod to soaring inflation, the Federal Reserve on Wednesday said it would end its pandemic-era bond purchases in March, paving the way for three quarter-percentage-point interest rate increases by the end of 2022.

“Consumers are still doing their best to keep the economy’s sails full and the recovery on track,” said Christopher Rupkey, chief economist at FWDBONDS in New York.

Retail sales rose 0.3% last month after surging 1.8% in October. Sales have now risen for four straight months. They increased 18.2% year-on-year in November. Economists polled by Reuters had forecast retail sales rising 0.8%. Estimates ranged from as low as being unchanged to as high as a 1.5% increase.

Several of the top U.S. retailers reported in mid-November that they had noticed an earlier start to holiday shopping. Retail sales could remain moderate in December, though higher savings and rising wages amid a tight labor market are supportive of spending.

Trillions of dollars in COVID-19 pandemic relief from governments across the globe fueled demand for goods, straining supply chains. The resulting shortages, ranging from motor vehicles to furniture and electronics, have raised goods prices.

Consumer prices increased a solid 0.8% in November, with the year-on-year gain of 6.8% the largest since June 1982. Inflation is likely to remain high for a while. A separate report from the Labor Department on Wednesday showed import prices increased 0.7% in November.

“Consumers have been bombarded with messages about the impact of supply shortages on the availability of holiday gifts,” said David Berson, chief economist at Nationwide in Columbus, Ohio. “They may well have done a lot of their holiday shopping earlier than usual.”

Stocks on Wall Street were mixed. The dollar rose against a basket of currencies. U.S. Treasury prices fell.

The moderation in retail sales, which are mostly goods, was in part due to shortages and higher prices. Receipts at auto dealerships dipped 0.1% after accelerating 1.7% in October. Automobiles remain scarce because of a global semiconductor shortage. Sales at electronics and appliance stores fell 4.6%.

“Food and gas are forcing hard choices for consumers in other areas this holiday season,” said Tim Quinlan, a senior economist at Wells Fargo in Charlotte, North Carolina. “Consumers are no longer the price-takers they were when they were flush with cash from stimulus checks.”

There were also increases in sales at building material stores as well as at sporting goods, hobby, musical instrument and book stores. Sales at clothing stores rose 0.5%.

Receipts at restaurants and bars increased 1.0%. Restaurants and bars are the only services category in the retail sales report. These sales were up 37.4% from last November, suggesting spending was reverting back to services. Demand shifted to goods during the pandemic.

Core retail sales correspond most closely with the consumer spending component of gross domestic product. Though inflation-adjusted, or real, consumer spending was probably flat in November, it is above its third-quarter pace. Consumer spending, which accounts for more than two-thirds of U.S. economic activity rose at a 1.7% annualized rate in the third quarter.

“We still think that real consumer spending growth will be strong in the fourth quarter on average, with firm earlier momentum before the disappointing November,” said Daniel Silver, an economist at JPMorgan in New York.

Rising COVID-19 infections could slow spending over winter, with the highly transmissible Omicron variant posing an additional risk. The Atlanta Fed lowered its fourth-quarter growth estimate to a 7.0% rate from a 8.7% pace earlier.

The economy grew at a 2.1% pace in the third quarter. Growth estimates for this quarter were boosted by a third report from the Commerce Department on Wednesday showing businesses’ inventories accelerated 1.2% in October.

“The winter Delta wave is now upon us,” said Diane Swonk

chief economist at Grant Thornton in Chicago. “The bulk of the weakness associated with the current wave of infections is expected to show up in the first quarter data.” 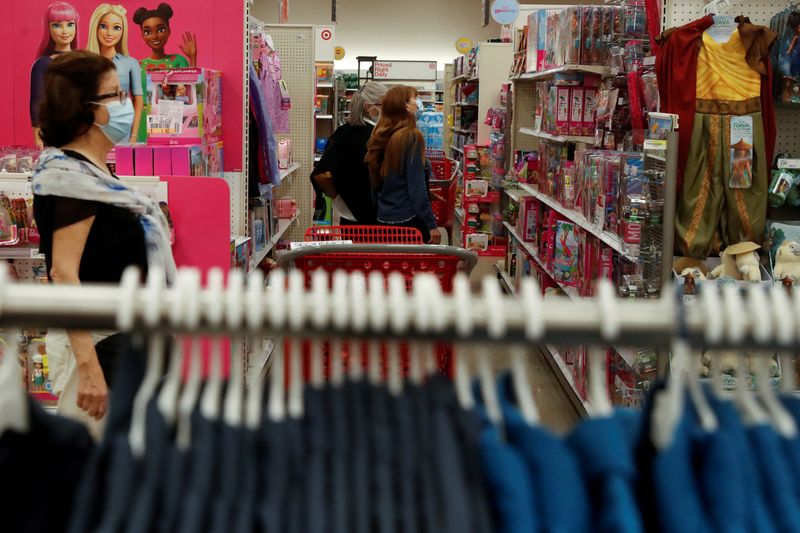