Other data on Thursday showed economic activity gathering speed as the year draws to a close. Manufacturing production rose to its highest level in nearly three years in November while homebuilding accelerated to an eight-month high.

The tightening labor market and strengthening economy encouraged the Federal Reserve on Wednesday to announce that it would end its pandemic-era bond purchases in March and pave the way for three quarter-percentage-point interest rate increases by the end of 2022. Fed Chair Jerome Powell said the economy was “making rapid progress toward maximum employment.”

“The economy is as fully employed as it is going to get for this cycle,” said Christopher Rupkey, chief economist at FWDBONDS in New York. “The 2022 economic outlook looks to be a good one.”

Initial claims for state unemployment benefits rose 18,000 to a seasonally adjusted 206,000 for the week ended Dec. 11. Claims had dropped to 188,000 in the prior week, the lowest since 1969. Economists polled by Reuters had forecast 200,000 applications for the latest week. Claims have declined from a record high of 6.149 million in early April of 2020.

Applications typically increase around the holiday season as companies temporarily close, but an acute shortage of workers has disrupted that seasonal pattern, resulting in large declines in the seasonally adjusted claims numbers in recent weeks.

There was a surge in applications in Missouri as well as big increases in Virginia and Kentucky. But claims dropped significantly in New York, Texas and Wisconsin.

The four-week moving average of initial claims, considered a better measure of labor market trends as it irons out week-to-week volatility, fell 16,000 to 203,750 last week, the lowest level since November 1969.

Economists expect claims to remain around these low levels heading into 2022 because of the scarcity of labor. There were a record 11.0 million job openings at the end of October and the unemployment rate is at a 21-month low of 4.2%.

Lack of workers and raw materials constrained manufacturing and homebuilding in the third quarter, helping to hold back the economy to its slowest growth pace in more than a year. There are, however, signs that the supply bottlenecks at factories are starting to ease.

In a separate report on Thursday, the Fed said manufacturing output climbed 0.7% last month to the highest level since January 2019. The increase in output was across the board, with even motor vehicle production rising.

“We expect further increases in production into 2022 as supply issues ease and backlogs of demand are worked through,” said Veronica Clark, an economist at Citigroup in New York.

Stocks on Wall Street were trading higher. The dollar fell against a basket off currencies. U.S. Treasury prices rose.

“Home building is ending the year on a strong note,” said Mark Vitner, a senior economist at Wells Fargo in Charlotte, North Carolina. “We remain optimistic about housing in 2022. Demand should be little affected by the modest increase in mortgage rates, resulting from the Fed’s quicker pace of withdrawing the extraordinary stimulus.”

The worker crunch could soon start to resolve. The claims report also showed the number of people continuing to receive benefits after an initial week of aid declined 154,000 to 1.845 million in the week ended Dec. 4. That was the lowest level for the so-called continuing claims since mid-March of 2020.

At least 2.5 million people were receiving benefits under all programs in the last week of November.

Indeed Hiring Lab’s job search survey on Wednesday showed the share of the population actively looking for paid work rose two percentage points to 29.1% in November from the prior month.

The rise reflected a jump among the unemployed to the highest level since the survey started in June. But rising COVID-19 infections and the Omicron variant of the coronavirus could discourage some people from looking for work.

Millions of unemployed Americans have remained home even as generous federal government-funded unemployment benefits ended in early September and schools reopened for in-person learning. The workforce is 2.4 million below its pre-pandemic level. 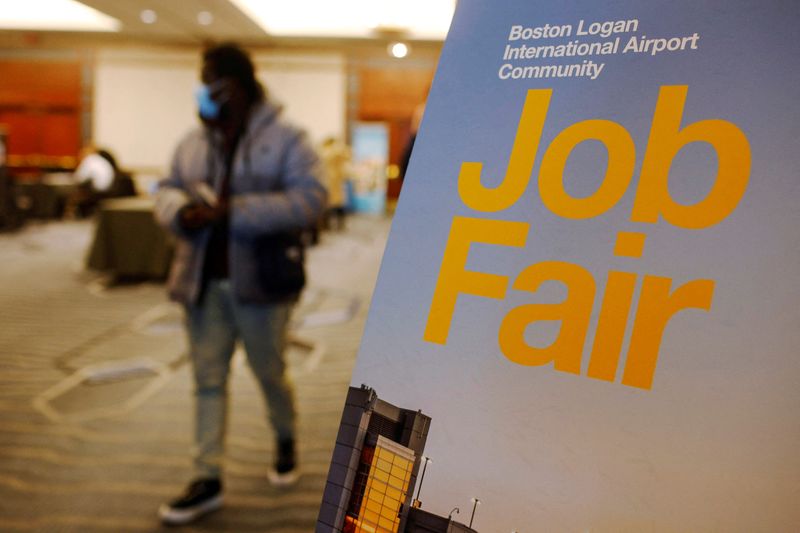