NEW YORK – Investors are scrutinizing the stock market’s narrowing breadth and other signs of ebbing risk appetite, as markets digest a hawkish pivot from the Federal Reserve, soaring inflation and concern over a fresh wave of COVID-19 cases.

Only 31% of stocks in the tech-heavy Nasdaq are trading above their 200-day simple moving average despite the index’s 18% year-to-date gain, according to Refinitiv data, the lowest level in at least a year. That number stands at 36% for the small-cap-focused Russell 2000.

Stocks in the S&P 500 are faring better, with 68% of constituents trading above that moving-average mark. Still, just five stocks – Apple, Microsoft, NVIDIA, Tesla and Alphabet – have accounted for about half of the index’s gain since April, data published by Goldman Sachs earlier this week showed. The S&P is up about 24% for the year and stands near record highs.

Narrowing breadth can presage a period of rocky trading, with deeper-than-average drawdowns and weaker overall returns, Goldman’s data showed. The bank’s analysts said declines may be limited this time around by factors such as strong corporate earnings and a market that may have already priced in a more hawkish Fed.

“If you can’t live with that, you should definitely dial back a little bit of risk,” Siomades said.

The S&P is up 1.2% and the Nasdaq is off 2.4% this month, as the focus on an increasingly hawkish Fed has dried up risk appetite in some corners of the market. The central bank on Wednesday said it would accelerate the unwind of its asset purchases and it paved the way for three quarter-percentage-point rate increases in 2022, as it fights persistent inflation.

Frazzled nerves have also been apparent in the Cboe Volatility Index, known as Wall Street’s fear gauge, which stands about 5 points higher than its long-term median. High-growth stocks that thrived in 2020 have tumbled, along with many of the so-called meme stocks that have rallied this year.

The percentage of investors with a bullish short-term outlook for the U.S. stock market slid to the lowest level in three months in the latest American Association of Individual Investors Sentiment Survey (AAII), released Friday.

Investors next week will be watching U.S. consumer confidence numbers for a read on whether buyers are changing their purchasing habits in the face of worries of high inflation and COVID-19.

“In order for the market to continue its advance, it becomes … reliant on fewer and fewer names,” said Peter Cecchini, director of research at Axonic Capital. “Any reversal in the performance of the names carrying the market won’t be met by strength in any of the other parts of the market.”

Concentrated positioning can also exacerbate volatility if risk appetite dries up suddenly, sending investors to the exits all at once.

“The door might not be wide enough to accommodate everybody that wants to rush out,” said Siomades, of AE Wealth Management.

That roughly coincides with a historically strong period for markets. Since 1945, the S&P has gained an average of 1.2% in the last five days of December and the first two days of January, according to data from CFRA, a phenomenon some investors have dubbed the Santa Claus rally.

Meanwhile, a survey of global fund managers by BoFA Global Research’s showed cash allocations at their highest level since May 2020. High levels of cash have in the past been a bullish sign for stocks, the bank said.

Narrow stock market breadth can continue for long periods and does not necessarily mean a sharp decline is coming.

Breadth in the S&P 500 narrowed for most of the second half of the 1990s, before the dot-com bubble burst around the turn of the century and during the latter part of the last decade, analysts at Capital Economics wrote.

Andrew Thrasher, a portfolio manager at Financial Enhancement Group, believes market breadth reveals the condition of the market but does not consider it a trading signal.

The past year “has been a poster child example of a market that can bend due to narrow breadth but not break as a result of it,” he said. 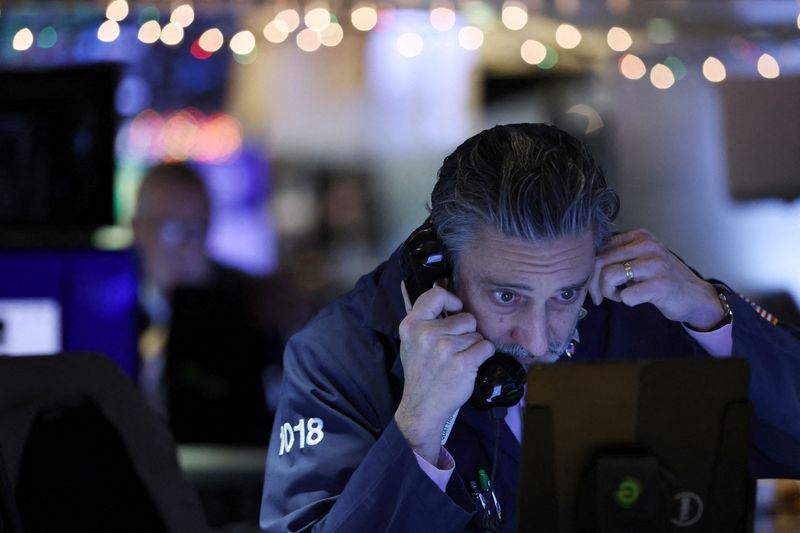 Germany’s Habeck optimistic trade dispute with U.S. can be avoided

Germany’s Habeck optimistic trade dispute with U.S. can be avoided