HONG KONG – Hong Kong holds a legislative assembly election on Sunday in which candidates have been vetted for “patriotism” and pro-democracy candidates are largely absent, having declined to run or been jailed or forced into exile.

The reshaping of the Legislative Council is the first major restructuring of Hong Kong’s political system since the territory’s return to China from British rule in 1997.

WHY IS THE ELECTION SIGNIFICANT?

This is the first citywide election to be held under a national security law imposed by China that took effect in June 2020.

Critics say the law has been used to curb fundamental freedoms of speech and assembly, silence opposition, jail pro-democracy activists and disband civil rights groups, in contravention of the terms of the handover.

Hong Kong and Chinese authorities say the law has restored stability and ended the disruption that mass protests had caused.

Article 68 of the Basic Law, Hong-Kong’s mini-constitution, states universal suffrage for the legislature as an “ultimate aim”.

But Beijing has said the changes to electoral law plug the “loopholes and deficiencies” that it said threatened national security after mass protests in 2019.

WHAT ARE THE KEY ELECTORAL CHANGES?

The legislature has been enlarged to 90 from 70 seats, with the proportion of directly elected seats reduced from half to less than a quarter of seats – just 20.

A 1,500-strong committee stacked with Beijing loyalists will directly select 40 legislators from a pool of around 50 candidates. Thirty seats are filled by “functional constituencies”, voters in various business and professional sectors, such as law and education.

The Candidate Eligibility Review Committee, a group of senior Hong Kong officials working with national security police to conduct background checks on candidates for “patriotism”, has discretionary power to disqualify anyone.

Critics say the changes make it next to impossible for democrats https://www.reuters.com/world/china/hong-kongs-jailed-exiled-democrats-lament-sunday-election-2021-12-16 to hold any substantial influence or act as a check on the executive.

WHAT HAS BECOME OF PRO-DEMOCRACY POLITICIANS?

The main opposition parties, including the Democratic Party and Civic Party, have declined to run for election, characterising the poll as undemocratic.

All 153 candidates were vetted by a pro-Beijing committee. About a dozen are considered moderate or independent, saying they do not align with either side, while the rest are considered to be pro-Beijing and pro-establishment figures.

The pro-democracy parties had initially planned to take part in the election, which was slated for September 2020 but postponed due to coronavirus restrictions. In preparation, they defied authorities by holding an unofficial primary election in July 2020 in a bid to choose the strongest candidates and maximise their chances.

On Jan. 6, the Hong Kong police arrested over 50 pro-democracy politicians. The following month, 47 were charged with conspiracy to commit subversion by joining the primary poll. Thirty-three are in prison awaiting trial, and 14 are out on bail.

HOW HAD DEMOCRATS FARED IN PREVIOUS POLLS?

Since 1997, democratic politicians have consistently performed strongly in the four-yearly Legislative Council elections, especially in directly elected seats, and have been able to control more than a third of the assembly to form a veto bloc.

In district council elections in 2019, a few months after millions agitated against Chinese control of the city, democrats won just under 90% of the seats.

Despite attempts by Chinese and Hong Kong officials to drum up support for this election, many observers expect public discontent towards the electoral changes and the continuing crackdown under the national security law to keep turnout low. Authorities say the security law and electoral changes have brought stability and order to Hong Kong after protracted anti-government and pro-democracy protests in 2019.    The voter turnout in 2016 was 58%, while the post-handover low of 43.6% in 2000. 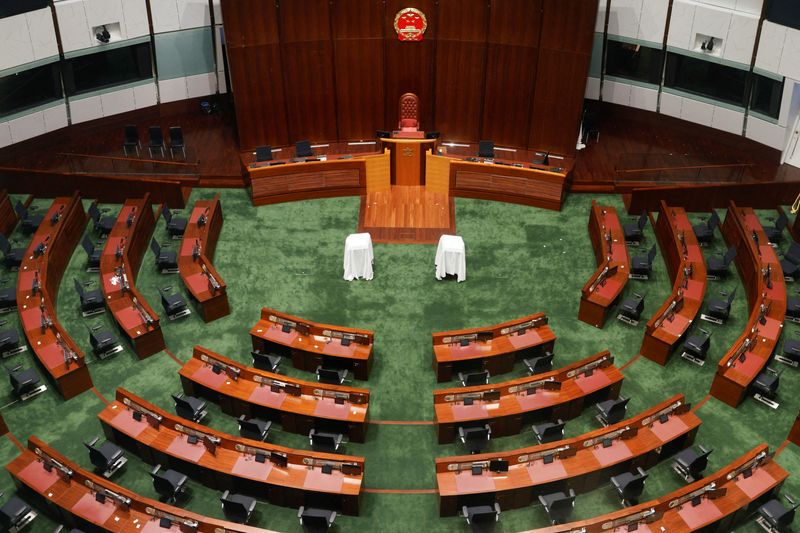