The new cases, which had not been previously disclosed, bring the total number of people who have tested positive for COVID-19 traveling on Blinken’s plane last week to three. On Wednesday, the State Department disclosed https://www.reuters.com/world/us/blinken-cuts-short-asia-trip-after-covid-19-case-among-travelling-group-2021-12-15 that a member of the press corps accompanying the top U.S. diplomat on the trip had also tested positive.

The Air Force did not say when or at which stop of Blinken’s trip the crew members tested positive. The journalist was identified as a positive case late on Tuesday, after being tested upon arrival in Malaysian capital Kuala Lumpur, where the person is still isolating.

“Both aircrew members were fully vaccinated. Neither had come into close contact with the Secretary of State or senior staff,” an Air Force spokesperson told Reuters in an email late on Friday. “One aircrew member is asymptomatic, while the other is experiencing mild symptoms.”

“Both are following host nation COVID-19 protocols,” the spokesperson said, indicating that the individuals were dropped off the plane at the location where they were identified as positive cases.

Earlier this week, Blinken had to cut short his trip to Southeast Asia after the State Department disclosed that the member of his traveling press corps had tested positive. On Monday, Blinken had visited Indonesia, but following the journalist’s positive COVID test, Blinken scrapped the final leg of the trip and returned to Washington without traveling to Thailand.

State Department spokesman Ned Price said on Wednesday: “Blinken and his senior staff” tested negative following the positive case among the press corps. Price’s statement, however, made no reference to others traveling on the plane with Blinken.

When asked on Saturday about the two crew members, a State Department spokesperson in a statement did not directly comment on them. “Regarding disclosure, as is standard with contact tracing and in accordance with CDC guidelines, we inform close contacts of positive cases,” the agency said.


The trip to Southeast Asia was Blinken’s first to the region since President Joe Biden took office in January.

The Biden administration has sought to shore up ties with a region that had become uncertain about U.S. commitment during a period of perceived neglect under former President Donald Trump.

China expanded its influence in Southeast Asia, pushing investment and trade integration, at a time when Trump had withdrawn from a U.S.-inspired Pacific trade pact that sought to challenge Beijing’s economic clout.

(Reporting by Phil Stewart in Washington; Editing by Matthew Lewis) 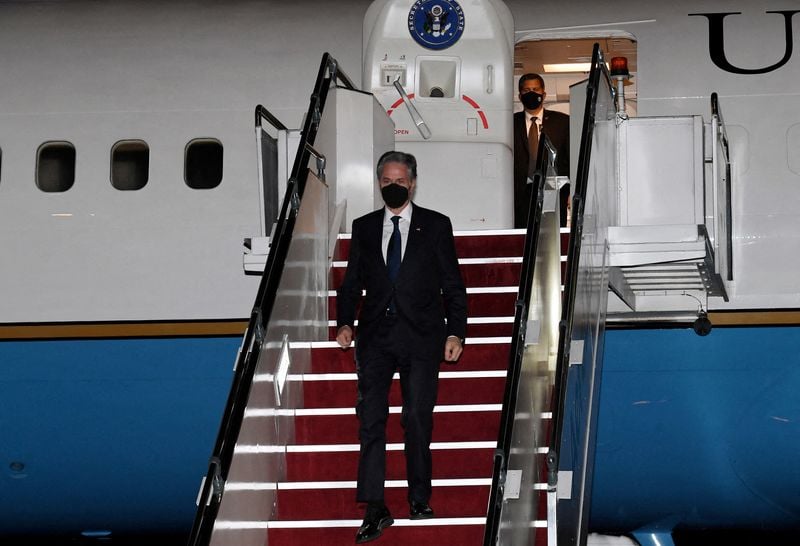