By Jessie Pang and James Pomfret

HONG KONG -The turnout for an overhauled https://www.reuters.com/world/china/how-hong-kongs-new-election-law-will-reshape-legislature-2021-12-18 “patriots”-only legislative election in Hong Kong on Sunday hit a record low, as government efforts and last-ditch campaigning failed to boost voter numbers amid a crackdown on the city’s freedoms by China.

After the close of polling, turnout was 30.2%. Turnout in the previous legislative poll five years ago was 58%. The previous record low for a legislative election held after the city’s return from British to Chinese rule was 43.6% in 2000.

The election – in which only candidates screened by the government as “patriots” can run – has been criticised by some activists, foreign governments and rights groups while mainstream pro-democracy parties are not participating.

Turnout is a central issue, as observers consider it a barometer of legitimacy in an election where pro-democracy candidates are largely absent, more than a third of the seats will be selected by a committee stacked with Beijing loyalists, and a crackdown under a China-imposed national security law has jailed scores of democrats https://www.reuters.com/world/china/hong-kongs-jailed-exiled-democrats-lament-sunday-election-2021-12-16. Civil society groups have disbanded.

Only 20 of the 90 seats were filled by direct elections.

“Clearly, the government’s objective is to secure a high turnout. Otherwise it may delegitimise this election,” said Jean-Pierre Cabestan, a professor of political science at Hong Kong’s Baptist University.

The government on Saturday sent blanket text messages to Hong Kong residents urging people to vote, and some critics called on people to stay away as a protest. It is a crime in Hong Kong to incite someone not to vote or to cast an invalid vote.

Hong Kong leaders say the poll is representative. They insist the overhaul, like the security law imposed last year, was needed to ensure stability after protracted protests that rocked the Asian financial hub in 2019.

Security was tight around the city, with 10,000 police and some 40,000 government election workers deployed.

Shortly before casting her ballot, university language teacher Tam Po-chu, 79, said the vote would promote stability and she hoped the new council would be responsive to the public. “There’s no use if they do not think of the Hong Kong people,” she said.

Chief Secretary John Lee, a former security chief, urged people to turn out, saying those excluded were “traitors” who wanted the vote to fail.

“The situation is critical,” Starry Lee, the head of the largest pro-Beijing party DAB, said in a recorded loop played on a loudspeaker in the working class Wong Tai Sin district. “I urge everyone to vote.”

Lee’s appeal did not convince local fruit seller Jack Ng, who said he would not take part in an election that was neither fair nor democratic. “I don’t understand why she is campaigning. She will win for sure, it is absurd,” said Ng, who is in his 20s.

Others who said they would not vote expressed anger at the changes that some said had turned the poll into a “selection” and the legislature into a “puppet”.

“After the election system was radically changed by the government, we can no longer elect our representatives and our candidates have been locked up by the regime,” said Peter, a 21-year-old student.

“Under this serious suppression, refusing to vote is apparently the only way for us to express our grievances.”

With transport operators offering free train, bus and tram rides, many stations were significantly busier than the polling booths.

Hong Kong leader Carrie Lam had told reporters at the start of voting that she was responsible for the election being conducted in a fair and open manner, “but not on the voter turnout rate.”

After polling closed she said in a statement that the 1.3 million or so ballots cast were a “show of support for the improved electoral system.”

Beijing’s Liaison Office in the city did not respond to Reuters requests for comment on voter turnout.

Before Lam spoke, several protesters from the League of Social Democrats opposition group chanted demands nearby for full universal suffrage and waved a banner reading “forced to be silent … spirit of freedom, vote with your conscience”.

In the run-up to the election, 10 people were arrested for allegedly inciting people to cast blank ballots, including people who had reposted social media posts from others, according to government statements.

Since China’s parliament in March announced the sweeping changes to Hong Kong’s electoral system, including reducing the number of directly elected seats, many opposition figures have declined to run, left the city or been jailed.

Of the 153 candidates contesting the 90 seats, around a dozen say they are not aligned with the pro-Beijing or pro-establishment camp. 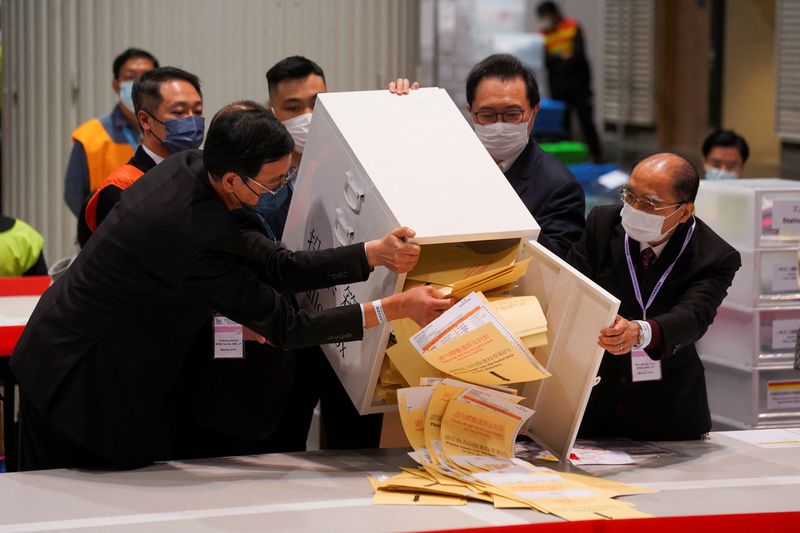 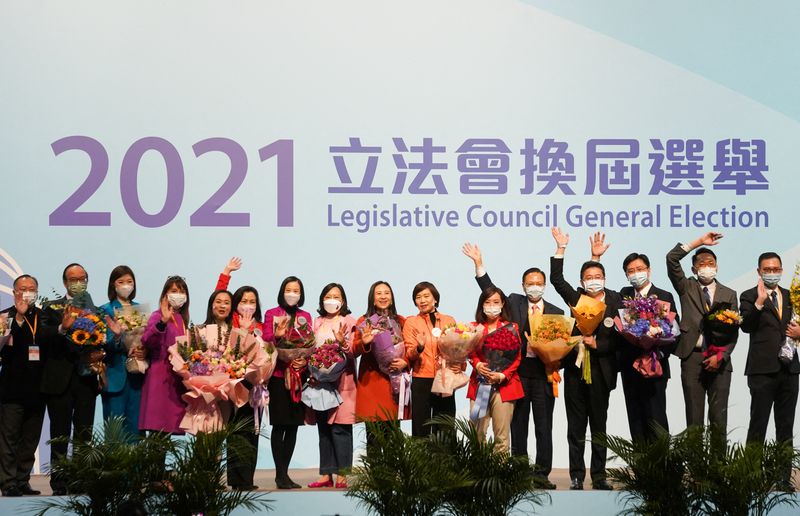 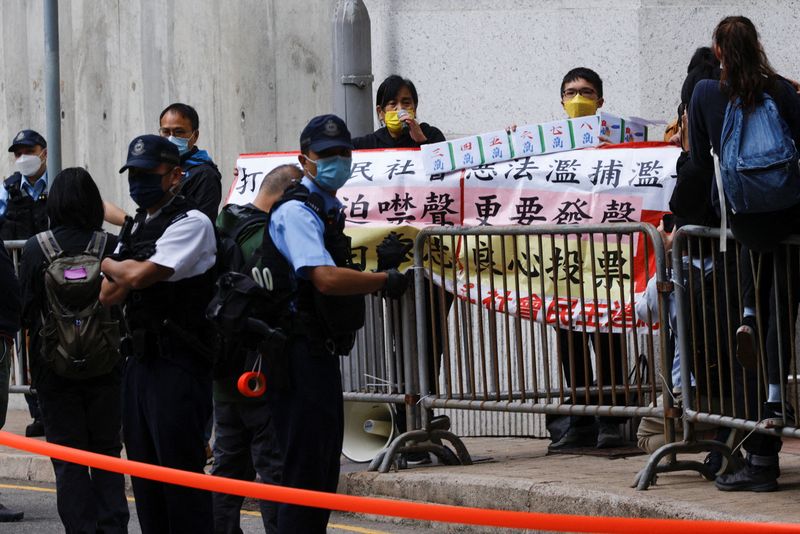 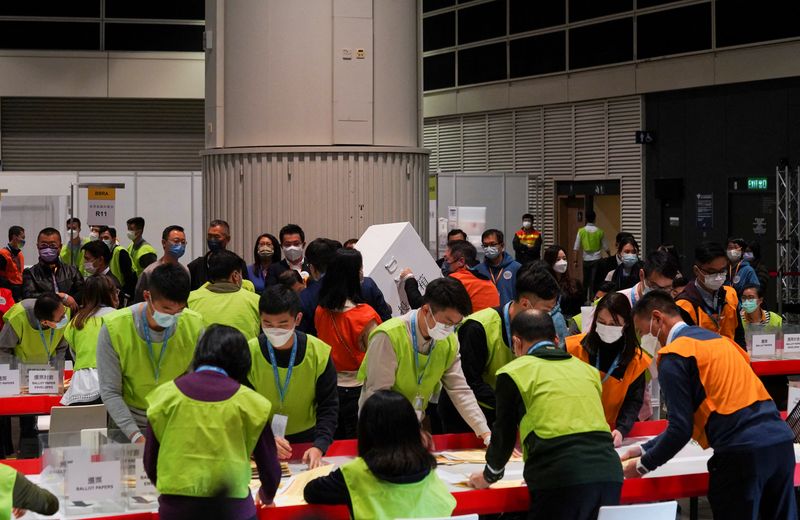 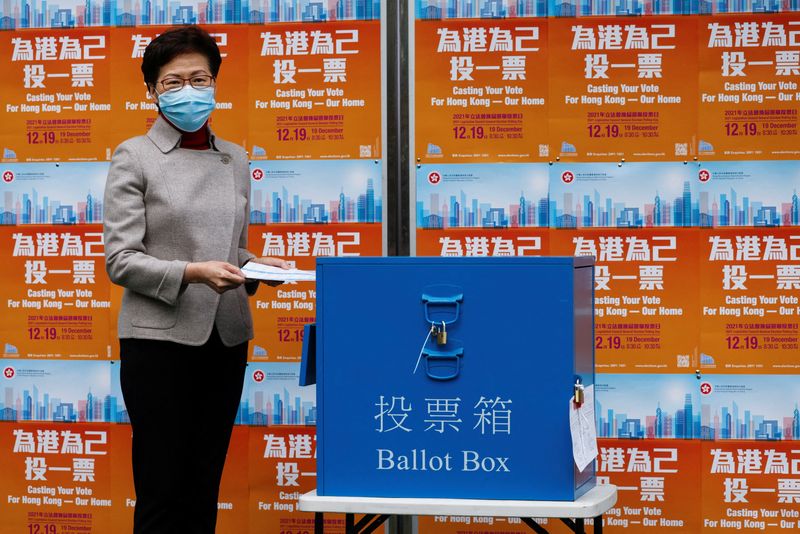