By Tom Hals and Mike Scarcella

-A U.S. appeals court on Friday reinstated a nationwide vaccine-or-testing COVID-19 mandate for large businesses, which covers 80 million American workers, prompting opponents to rush to the Supreme Court to ask it to intervene.

The ruling by the 6th U.S. Circuit Court of Appeals in Cincinnati lifted a November injunction that had blocked the rule from the Occupational Safety and Health Administration (OSHA), which applies to businesses with at least 100 workers.

“It is difficult to imagine what more OSHA could do or rely on to justify its finding that workers face a grave danger in the workplace,” said the opinion. “It is not appropriate to second-guess that agency determination considering the substantial evidence, including many peer-reviewed scientific studies, on which it relied.”

President Joe Biden unveiled in September regulations to increase the adult vaccination rate as a way of fighting the pandemic, which has killed more than 750,000 Americans and weighed on the economy.

The ruling coincides with public health officials bracing for a “tidal wave” https://www.reuters.com/world/us/tidal-wave-omicron-could-put-us-covid-19-surge-into-overdrive-2021-12-17 of coronavirus infections in the United States as the more transmissible Omicron variant spreads rapidly worldwide.

“While we are disappointed in the Court’s decision, we will continue to fight the illegal mandate in the Supreme Court,” South Carolina Attorney General Alan Wilson said on Twitter. “We are confident the mandate can be stopped.”

Within hours of the ruling, at least three petitions were filed with the U.S. Supreme Court, asking it to immediately block the mandate.

A group of business groups representing retail, wholesale, warehousing, transportation, travel and logistics filed one of the first petitions with the high court, raising among other issues the potential for workers to quit rather than take the shot.

Companies such as United Airlines have used mandates to increase the number of vaccinated employees, often with only a small number of workers refusing the shots.

But others such as Boeing Co have suspended their plans, in part because of court rulings putting government mandates on hold, but also due to resistance among workers.

Courts have blocked Biden’s vaccine requirement for healthcare workers in half the states and a vaccine mandate for federal contractors has been blocked nationwide.

The rule set a Jan. 4 deadline for compliance, although it was unclear if that will be enforced because the rule was blocked for weeks. 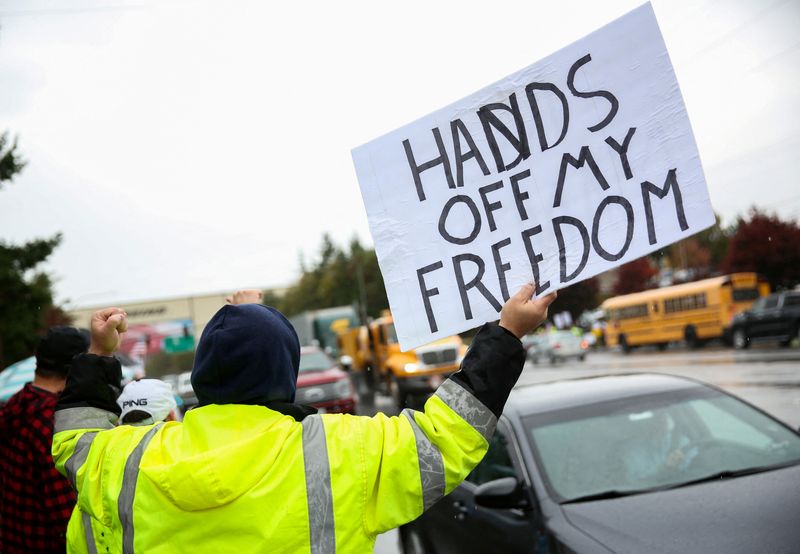