By William Schomberg and Guy Faulconbridge

LONDON -British Brexit minister David Frost resigned on Saturday over disillusionment with the direction of Boris Johnson’s government, dealing a major blow to the embattled prime minister https://www.reuters.com/world/uk/british-pm-johnson-faces-rebellion-parliament-over-covid-measures-2021-12-14 as the Omicron variant sweeps the country.

The resignation of Frost, a core architect of Johnson’s tumultuous Brexit strategy, raised questions about the future tone of the EU divorce and the immediate course of talks on Northern Ireland. It also added to a sense of turmoil in Johnson’s Conservative government.

Frost said he was confident that Brexit was secure, but said he had concerns about the government’s direction.

“You know my concerns about the current direction of travel,” Frost told Johnson in a letter released by Downing Street.

“I hope we will move as fast as possible to where we need to get to: a lightly regulated, low tax, entrepreneurial economy, at the cutting edge of modern science and economic change.”

His resignation was first reported by The Mail on Sunday, which said it was triggered by Johnson’s tougher COVID restrictions but also by a broader discontent with tax rises and the cost of environmental policies.

Frost said he had agreed with Johnson earlier this month to leave in January, but because his move had been leaked it should happen with immediate effect.

“We also need to learn to live with COVID,” Frost said. “I hope we can get back on track soon and not be tempted by the kind of coercive measures we have seen elsewhere.”

Johnson said he was sorry to receive Frost’s resignation.

The departure of the British government’s most senior Brexit negotiator comes on top of warnings from some of his Johnson’s own Conservative Party lawmakers that he must improve his leadership or face a challenge.

Johnson, who won a landslide election victory in December 2019, is facing the biggest crisis of his premiership after a litany of scandals and missteps, which his opponents say show he is unfit to be prime minister.

He has faced a barrage of criticism since a video emerged showing his staff laughing and joking about a Downing Street party during a 2020 Christmas lockdown when such festivities were banned.

Downing Street had denied a party took place. Britain’s top civil servant, Simon Case, has stepped down from leading the investigation into alleged parties after it was disclosed that an event had been held in his own office.

The loss of a parliamentary seat in an election defeat in a Conservative stronghold earlier this week showed public dismay over the litany of scandals and stepped up pressure on Johnson. [nL1N2T2040]

Frost, a former diplomat who was repeatedly hailed by Johnson as “the greatest Frost since the Great Frost of 1709,” was a committed Brexit supporter who negotiated Johnson’s revised EU divorce deal and a trade agreement.

He cast the United Kingdom’s 2016 vote to leave the EU as part of a broader rebellion against the bloc’s transnational collective governance that wanted to revive the nation-state.

Having such a true “Brexit believer” at the heart of British power gave reassurance to Brexit supporters in the Conservative Party that Johnson would remain tough on the European Union.

Frost, until his resignation, was leading an attempt by London to renegotiate parts of the divorce deal concerning Northern Ireland.

Beyond Brexit, though, the 56 year-old Frost was unhappy.

In a speech last month, Frost expressed his clear discontent with the course of post-Brexit British policy.

“We have not successfully rolled back the frontiers of the European Union from Britain with Brexit, only to import that European model after all this time,” Frost said in a Nov. 22 speech at the Margaret Thatcher Conference on Trade.

He disagreed with “those who think we can treat the private sector as just a convenient way of keeping the public sector running.”

“It isn’t just a source of taxes,” Frost said. “We can’t carry on as we were before, and if after Brexit all we do is import the European social model we will not succeed.”

The opposition Labour Party said the government was in chaos and said Johnson should provide clarity on what would happen in talks with the EU over the Northern Irish Protocol, a part of the divorce deal.

“Boris Johnson needs to get a grip, tell us his plan for the next few weeks and bring certainty for the people of Northern Ireland by unblocking the stalemate over the Protocol,” said Jenny Chapman, Labour’s shadow minister of state at the Cabinet Office. 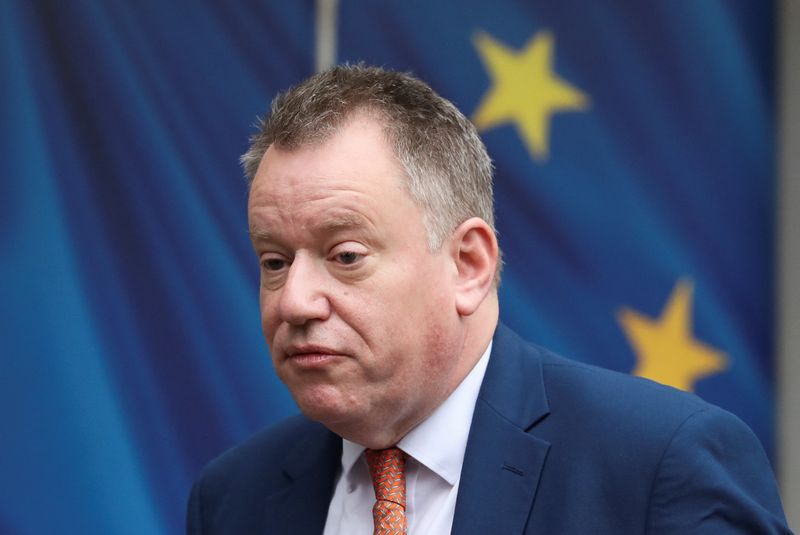