By Tuvan Gumrukcu and Ece Toksabay

ANKARA -Turkey’s lira ended the session up over 20% on Monday after President Tayyip Erdogan introduced a series of steps that he said will ease the burden of the weakened currency on Turks, while vowing to press on with a low-rates policy that led to the lira’s slide in the first place.

The lira, which was down more than 10% at 18.4 to the dollar earlier, strengthened sharply and ended up 25% on the day at 13.15 in reaction to Erdogan’s announcement, in its largest daily trading range on record. It remains down 45% so far this year.

Around $1 billion was sold in markets after Erdogan unveiled the measures, the head of the Turkish Banks Association said.

“I imagine the market was very short the lira and the measures announced by Erdogan to protect domestic investors’ savings from lira fluctuations provided some impetus to cover those shorts,” said Shaun Osborne, chief FX strategist at Scotiabank in Toronto.

Speaking after a Cabinet meeting, Erdogan said the measures would ensure citizens would not have to convert their lira into foreign currency over the lira crash, including a deposit guarantee promise.

“We are presenting a new financial alternative to citizens who want to alleviate their concerns stemming from the rise in exchange rates when they evaluate their savings,” Erdogan said.

“With the interest rate cuts, we will all see how inflation will start falling within months,” he said. “This country will no longer be a heaven for those adding to their money with high interest rates, it will not be an import haven.”

He also called on “everyone with money, access to finance” to contribute to investments and pledged steps to aid exporters and pensioners.

“Today’s move is solely based on the Turkish government’s announcement that it would protect against fluctuations in the currency,” said John Doyle, vice president of dealing and trading at FX payments firm Tempus Inc.

“The most important piece is that the government says that it will make up for losses in lira deposits if the lira declines exceed interest rates promised by banks. The government did not say how exactly they would execute this plan,” Doyle said.

Erdogan’s push for 500 basis points of interest rate cuts since September has set off Turkey’s worst currency crisis https://www.reuters.com/world/middle-east/yearender-turkeys-crisis-rattles-faithful-erdogans-heartland-2021-12-20 in two decades, with the lira crashing near 40% in just the five weeks to last Friday.

“I think that if you continue to see rate cuts (…) you should continue to expect ample volatility going forward and that many investors will still target fresh record lows despite this historic reversal that we’ve seen,” said Edward Moya, senior market analyst for the Americas at Oanda in New York.

Economists have called Erdogan’s low-rates model reckless and said inflation would soar to beyond 30% next year.

“Turkey is going into a complicated process, they are no longer playing the game by the rules,” Ozkardeskaya said.

Turkey’s five-year credit default swaps, the cost to insure against a sovereign default, jumped 39 basis points from Friday’s close to 622 bps according to IHS Markit.

Erdogan defended his economic policy on Sunday and likened the currency volatility to attacks on the country’s economy that have roots in 2013 nationwide protests.

“We’re lowering interest rates. Don’t expect anything else from me. As a Muslim, whatever (Islamic teaching) requires I will continue to do that,” he said, referring to Islamic finance in which high interest, or usury, is typically avoided.

Despite widespread criticism and the rapid fallout for the economy – including Turks’ fast-eroding incomes and savings – Erdogan has forged ahead with his economic program which prioritizes exports and lending.

Under pressure from the president, the central bank cut rates again last week by 100 basis points, sending real rates deeper into negative territory, a red flag for investors and savers.

Inflation jumped to 21% last month and is expected to pass 30% next year.

Even after today’s sharp gains, the lira has lost about half its value to the dollar this year and is by far the worst performer among emerging market economies, due largely to damaged monetary credibility, analysts say.

In an attempt to slow the selling and address what it called “unhealthy” prices, the central bank has intervened five times this month, though there was no official indication of intervention on Monday. Bankers’ calculations show it has sold more than $6 billion from its already-depleted foreign reserves.

“If anything, (Erdogan’s announced) measures will bring an end to the uninterrupted breaks through record-lows, but in order for the lira to trade at levels seen last year, more action is needed from the central bank,” said Ima Sammani, FX Market Analyst at Monex Europe. 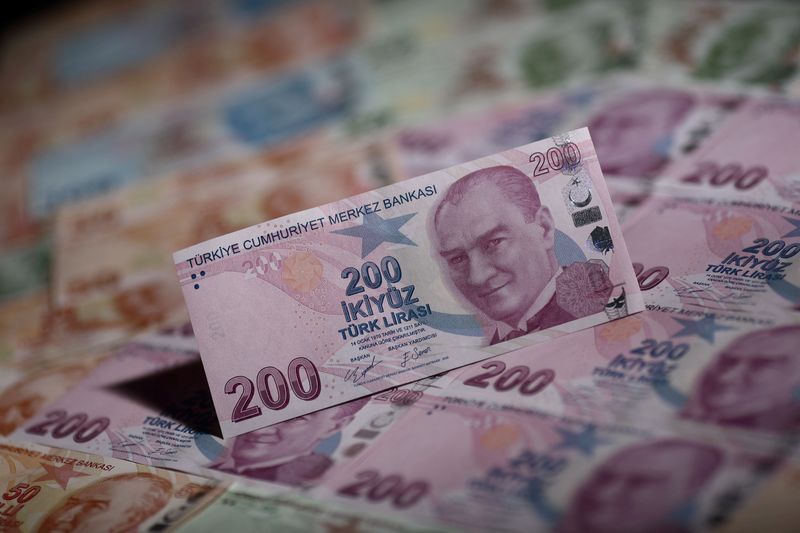