By Susan Heavey and Moira Warburton

Senate Majority Leader Chuck Schumer unveiled plans for both votes on Monday, the day after Manchin — who has stood as a roadblock to many Biden policies in the evenly divided chamber — said in a television interview that he would not vote for the “Build Back Better” bill, dealing it a potentially fatal blow.

“The Senate will, in fact, consider the Build Back Better Act, very early in the new year so that every Member of this body has the opportunity to make their position known on the Senate floor, not just on television,” Schumer wrote in a letter to colleagues.

Democrats need all of their members on board to pass legislation in the Senate. Biden and party leaders negotiated with Manchin for months to satisfy his concerns, but the West Virginia senator said on Monday that those talks were doomed to fail.

“I knew where they were and I knew what they could and could not do,” he said in a radio interview. “I knew that we could not change, it was never going to change.”

U.S. stocks fell on Monday, weighed by the news as well as fears about the Omicron variant of COVID-19, while Goldman Sachs trimmed its quarterly GDP forecasts for 2022 on the assumption that the plan would not become law.

The Build Back Better plan aims to expand the social safety net and tackle climate change. Many Democrats have said the bill is essential to the party’s chances in the Nov. 8, 2022, midterm elections.

A vote would force Manchin to publicly record his objection to the bill ahead of the elections, in which Democrats seek to keep control of the Senate as well as the House of Representatives.

Manchin’s comments prompted an angry response from the White House on Sunday, and White House spokeswoman Jen Psaki said the administration would find a way to advance the legislation.

It was not immediately clear how or if lawmakers could salvage the full bill or whether parts of it could be adopted.

“We are going to vote on a revised version of the House-passed Build Back Better Act – and we will keep voting on it until we get something done,” Schumer wrote.

A VOTE ON VOTING RIGHTS

Manchin won re-election in 2018 in a deeply conservative state that twice voted for Donald Trump. The senator has raised objections to elements of the bill intended to fight climate change, which are opposed by the coal and natural gas industries that are economic drivers in his home state.

Manchin founded the private coal brokerage Enersystems in 1988 and still owns a big stake in the company, which his son currently runs.

Schumer said the Senate would consider voting rights legislation in January, and Democrats would weigh whether to change those rules.

Progressive Democrats, who agreed to support an infrastructure bill in return for a vote on Build Back Better, expressed anger on Monday.

“We really need to start creating an environment of pressure,” she said on MSNBC. “Make it tough.”

Elements of the social policy plan – such as universal preschool, an enhanced child-care tax credit and larger healthcare subsidies – are popular with voters, polling shows. 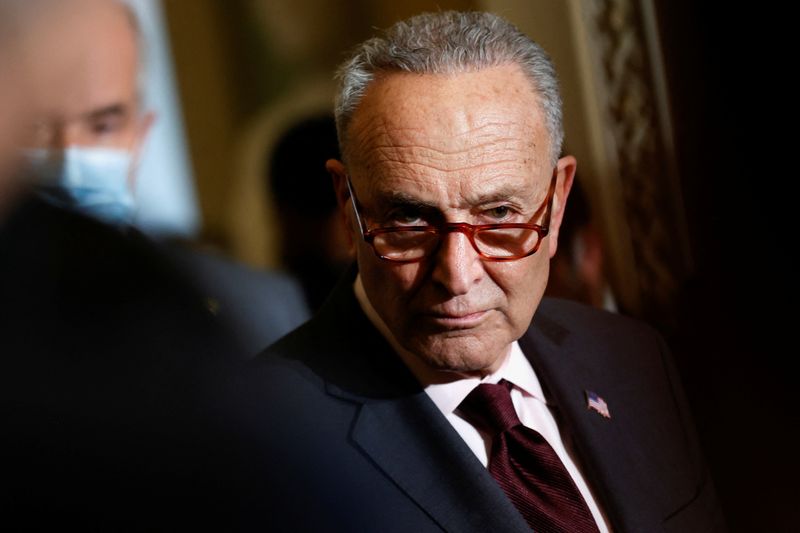