By Steve Holland and Kanishka Singh

WASHINGTON -U.S. President Joe Biden said on Tuesday that he and conservative Democratic Senator Joe Manchin were “going to get something done” on the president’s proposed social spending and climate legislation.

“Senator Manchin and I are going to get something done,” Biden told reporters when asked about Manchin, who had publicly rejected the president’s Build Back Better plan on Sunday in a move that imperils the legislation.

“I want to get things done. I still think there’s a possibility of getting Build Back Better done,” the president told reporters following his remarks on COVID-19 at the White House.

Manchin said on Monday that White House staff did “inexcusable” things that led to his decision to publicly reject Biden’s social and climate policy plan. He told Fox News on Sunday he would not be able to vote for the $1.75 trillion Build Back Better bill.

Meanwhile, Senate Democrats on Tuesday night supported Senate Majority Leader Chuck Schumer’s plan to hold a vote in January on the legislation, according to a Democratic source.

During a 95-minute virtual meeting of the 50-member Senate Democratic Caucus, Schumer told his rank-and-file, “I know we are all frustrated at this outcome,” referring to Manchin’s opposition, according to the aide who asked not to be identified.

“However, we are not giving up on BBB. Period,” the aide said quoting Schumer.

On a separate matter, the aide said Schumer pledged to also hold a vote in January on voting rights legislation Republicans have been blocking, and if they do so again, the Senate would vote on changing rules to help win its passage.

The aide did not say whether Manchin participated in the closed meeting.

A proposal outline Manchin submitted to the White House last week included $1.8 trillion in funding over 10 years, as Biden had hoped, but no child tax credit, the Washington Post reported on Monday.

Manchin’s support is crucial in a chamber where the Democrats have the slimmest margin of control and Republicans are united in their opposition to the bill.

(Reporting by Steve Holland and Richard Cowan in Washington and Kanishka Singh in Bengaluru; editing by Jonathan Oatis and Stephen Coates) 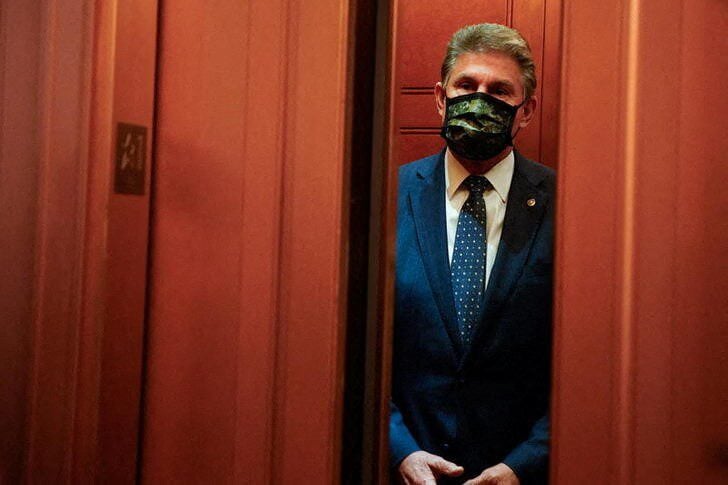